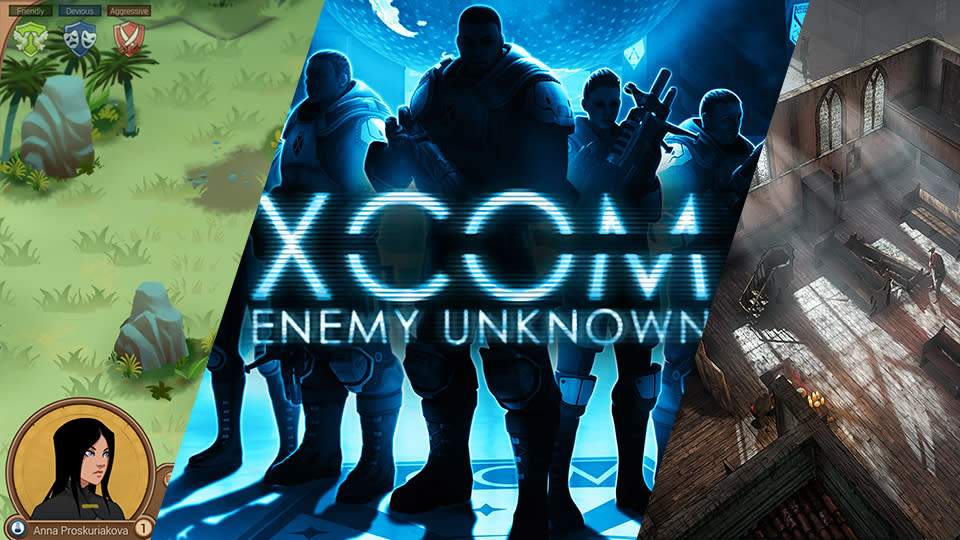 2012's XCOM: Enemy Unknown was a revelation. I'd never played the '90s original or its successors, but I was immediately drawn in by the reboot's story, world and, most of all, combat mechanics. At its heart, XCOM is a turn-based strategy game that pits your team of four soldiers against an alien invasion. As anyone who has played it at all will tell you, though, it's so much more than that. A sequel is coming this November, but in the meantime, a pair of independent developers are readying their own takes on the genre, and they both have the potential to be truly special games in their own right.

A Fistful of XCOM Hard West is set in the "Weird West" -- an occult version of the Wild West. That means that while you'll see the typical six-shooters, saloons and heists, there are also demons, witches and all manner of supernatural goings on. Originally funded on Kickstarter, it's since been picked up by publisher Devolver Digital's sister label Gambitious. It's coming to PC, Mac and Linux this fall.

The game takes the basic combat mechanics of XCOM -- strategically planning an assault, using the environment for cover, maintaining line of sight, etc. -- and throws some insane things on top. The most interesting addition is a perks system based on poker hands. There's a whole deck of cards to be unlocked, and each card comes with a unique ability. One allows you to ricochet bullets Wild West-style off any curved surface, letting you shoot around corners or -- with careful planing -- hit multiple enemies with one shot. The cards are all "overpowered," and your characters have five slots each for combining perks together. For an example of how effective this can be: there's a card that reduces everyone's health to one, meaning you could potentially kill every enemy with a single ricocheted shot. The drawback? It reduces everyone's health, i.e. yours and your party members' too.

Ricocheting bullets using one of the perk cards.

The perks system gets more complex when you start viewing it from a poker player's perspective. When combining cards, you're not just looking at what the individual perks are, but also the rest of your hand. You get bonuses for hands with pairs in them, and those bonuses get better as your combinations get better. Three of a kind is stronger than a pair, and a straight is even more desirable. Kacper Szymczak, Lead Designer at developer CreativeForge Games, won't tell me what a royal flush will yield, but says the bonus will be "awesome." Of course, giving all the best cards to one character is likely to leave the rest of your team underpowered. Weighing potential bonuses against keeping your team balanced promises to keep players busy for hours.

While -- in case you hadn't noticed -- the perks fill me with glee, the game would be nothing without the combat. Although I was only able to watch a developer play through some missions, it seems solid. It's very XCOM-y, of course, but there are some interesting touches. You can manipulate your environment by, say, flipping open a cellar door or a table to create cover. If an opponent's shadow is visible, then you will be able to keep tabs on where they are, even if line-of-sight isn't there (this is especially useful when you have the ricochet ability). There are also a wide range of abilities for individual weapons, such as cone shots for shotguns, which are handy against congested groups of enemies. You can also neuter opponents, and control crowds "stick 'em up" style. Using this tactic, some missions (such as the one in the video below can be completed "without a single bullet being fired," Szymczak explains.

The other thing that sets Hard West apart from XCOM is its narrative. Although XCOM's world is engaging and interesting, the personal narratives are really left for you to fill in. It's one of the things I love about the game: creating a vivid backstory for a character, only to see them die and never return. Hard West "is heavily story-driven, and character-driven," says Szymczak. Events are wonderfully narrated by a grizzly voice, à la Bastion, and in-between combat you'll be traversing a map, learning about the characters, meeting new faces, making decisions that will impact the story, and trading resources.

To be fair, CreativeForge had me at "weird west XCOM," but I came away from the demo way more enthused than I'd thought I would. For fans of the genre, Hard West looks set to provide a healthy dose of the familiar, but with more than enough innovation to keep things fresh.

XCOM and the Temple of Doom Renowned Explorers: International Society is a very different beast. Abbey Games -- known for the 2D god game Reus -- has injected a lot of personality into the genre. "Our initial pitch for the game was 'XCOM meets Indiana Jones,'" says studio co-founder Manuel Kerssemakers. "We're approaching the same topics as Tomb Raider and Uncharted, but from a management perspective. It's a really cool theme, but if you like games that make you think, you can't really access the fantasy of being an explorer."

You play as a 19th century explorer trying to make a name for yourself. You do this by increasing your "Renown" score through uncovering treasures, charting new lands, and outwitting your foes. There are many explorers to choose from, each with their own strengths that come into play both during exploration and combat. I went with Yvonne Lefevre, a brilliant public speaker that can talk her way out of difficulties in a pinch. Before launching an expedition, you're able to equip yourself appropriately, and complete tasks that will increase your gold, level, or Renown. You can then pick other classes to join you on your travels. There are four main types -- Scientist, Scout, Fighter, Speaker -- and then several different traits within each type.

Expeditions themselves borrow a little from perhaps my most-played game in recent years: FTL: Faster Than Light. Kerssemakers explains that "to facilitate the exploration ... we knew that we had to look at FTL, because it's a favorite game for many of us." The way this works is by adding the space sim's "node-based" navigation, which sees you taking whichever route you please between various points in order reach a goal, all while managing fuel (or in Renowned's case, supplies). Like FTL, most of the nodes feature events of some description, which can either be combat instances, opportunities to acquire supplies, increase your Renown or gather gold.

Once you get into a combat situation, you'll find that it's far simpler -- map-wise , at least -- than XCOM, as there are no elevation or cover mechanics to speak of. You can, of course, use the environment to physically put space between you and an opponent, and carefully planning your assaults is still vital, but the complexity of Renowned's combat system lies in its attack types. For this, Abbey Games takes inspiration from an unlikely source: The Sims 4. "We wanted to make a tactical game, but also offer the option of non-violence, so you can approach the natives and wildlife in whichever way you want, and we added the option to act friendly in a combat encounter."

Friendly in combat? Yup. Everyone (your characters included) essentially have two "health" stats that are affected by different types of attacks. One is more of a traditional vitality gauge, while the other looks like a Sims-style happiness meter. A native may be extremely capable of defending against physical attacks, but have the emotional resilience of a teenager going through a break-up. In one encounter, I essentially hid behind a rock and used an area-of-effect attack to call the enemy names. He ran away crying.

The system is extremely complex, as your actions in both individual encounters and expeditions as a whole will affect the way enemies see you further down the line. If you stab someone and then attempt to charm their friend, it's not going to be effective, and if you get a reputation as a conquerer of foreign lands, you'll have trouble ingratiating yourself to the natives in your next expedition.

I only played through a couple of expeditions, but that was enough to get me hooked. Each campaign lasts around ten hours, but, with procedurally generated maps, and an enormous roster of characters and items, that doesn't have to be a big deal. I get the feeling that there's so much depth waiting to be discovered, so many different ways to approach the game, that I could end up replaying it hundreds of times, just as I have FTL and XCOM. The game releases September 2nd on PC, Mac and Linux, and I can't wait.

In this article: AbbeyGames, CreativeForgeGames, FiraxisGames, gamescom, gamescom-2015, gamescom2015
All products recommended by Engadget are selected by our editorial team, independent of our parent company. Some of our stories include affiliate links. If you buy something through one of these links, we may earn an affiliate commission.