Becoming a rain detective with a backyard weather station 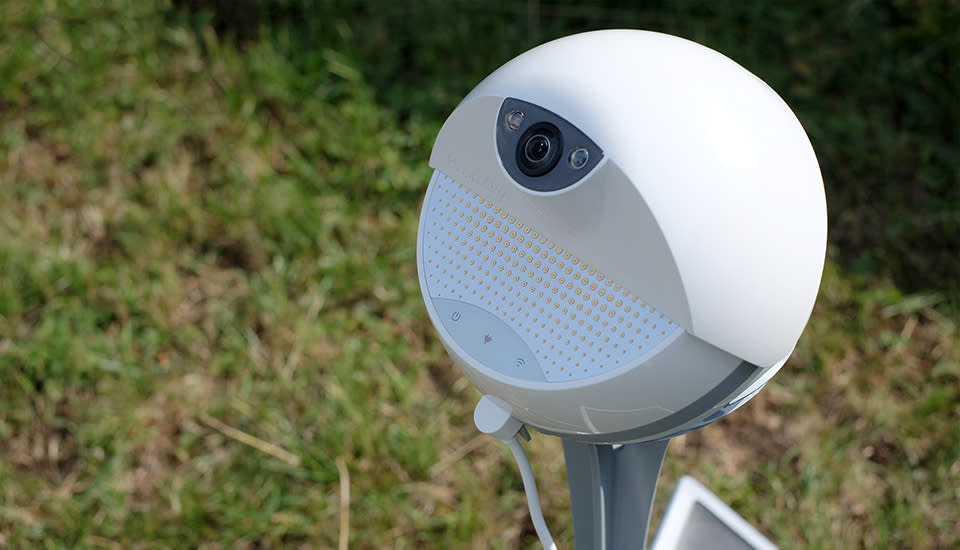 London summers can be the most arduous of times. Since early July, we've had highs of 98 and lows of 48. We've had sun, rain and everything in between. Planning where to go or what to wear more than a few days in advance is an impossibility. I do my best, of course, combining AccuWeather's useful-but-often-inaccurate extended forecasts with the Dark Sky app for up-to-the-minute weather alerts. Over the past week or so, however, I've added a new tool to my arsenal: the BloomSky. It's an all-in-one outdoor weather station that, for currently $169 and up, provides you with hyper-local weather information. Although it hasn't changed my life, becoming a meteorologist has been quite a lot of fun.

The BloomSky is a pretty cute spherical blob stuffed full of tech. It's fairly innocuous, although thanks to a prominent fish-eye camera that snaps the sky every few minutes, it does look a little CCTV-ish. In fact, if I were to design a friendly looking camera to monitor my dystopian empire, it'd probably look something like this: Aside from that camera, the weather station also has temperature, pressure, UV, rain and humidity sensors. It uses this array of electronics to monitor all the vital weather conditions, while its camera captures photos of the sky every few minutes.

As you'd expect, the unit is weatherproof -- something London has tested with ruthless efficiency over the past week -- and will last two weeks on a charge. I also tested BloomSky with an optional solar panel (an add-on currently going for $119, or as part of a $269 bundle), which leans next to the weather station and provides a daily charge for free. This has worked pretty well even in London, so if you live somewhere less cloud-inclined, it seems like a no-brainer.

Installing the BloomSky outside was remarkably easy. You have a couple of options, depending on where you want to set it up. There's a solid-looking bracket for attaching it to walls and posts, but as I recently gave up on life and moved to the leafy London suburbs, I actually have a yard, complete with a lawn. Thus, my setup was as follows: For all the ease of physical installation, getting the BloomSky up and running via the mobile app was a hassle. The initial setup happens via your router, and halfway through, you're supposed to head outside to install the unit. The problem is, the first few spots I chose didn't have a strong enough WiFi signal (despite my phone connecting to the same network just fine), meaning I had to repeat the process -- and move the mounting equipment and solar panel -- several times to get it up and running. Another word of warning: The weather station only supports 2.4GHz WiFi, so I needed to change the settings on my router to create a supported network, and you may have to do the same.

I also had quite a lot of stability problems after the initial installation, but since a recent software update everything has been running smoothly. Since the unit only became available for general purchase this week, there's not much point in rehashing the issues in any detail. The first things you'll notice after setting up the BloomSky are the images it captures. Every five minutes or so, it takes a photo and uploads it with an overlay of the time and temperature (mine reports in Celsius, but you can configure yours to show Fahrenheit if you don't enjoy sensible measurements). You can share any of these pics to services such as Facebook, Instagram, Twitter or email -- pretty much any iOS or Android app that can handle a JPEG file. Image quality is unfortunately fairly average: the photos are 640 x 640 squares, perfect for sharing, but not much else, although it does a good job of not over- or under-exposing things.

The app also creates a daily time-lapse video, showing you the sky from sunrise to sunset. The length of these videos seems like an oversight. Mine clock in at slightly over 20 seconds, meaning that I can't share the entire thing to Instagram, which has a 15-second limit, or Vine, which is even shorter. It seems like it'd be a simple fix, but right now there's no option in the app to control how long the videos run.

Photos and videos are more of a bonus, though -- a sideshow to the main event. The real BloomSky pitch is to create crowdsourced, hyper-local weather reports. The dream is that you'll be able to check in on weather stations in your area to see what conditions are like with perfect accuracy. For now, however, there aren't many around. There's one around 20 miles south of me, and I've taken to checking in to see what's going on there. Weather cycles typically travel from south to north in this part of the world, so if there are rain clouds there, it's a safe bet they're headed my way.

The station in my yard communicates with BloomSky's servers, letting me know through its app the temperature, the humidity, the UV index (which I imagine would be handy in warmer climates) and whether or not it's raining. The latter should be the most useful. If you've got other "smart" products around your home you could, for example, turn off your sprinklers remotely when you get a rain notification.

In practice, the BloomSky's sensitivity left a lot to be desired. It's fine at telling me when it's really raining, but if there's some light drizzle -- the sort that would make me pull in my laundry from the clothesline outside -- it doesn't ping the app, even when a visual inspection tells me its rain sensors are wet. I'd guess this is on purpose: You don't want a rain notification if a single drop falls from the sky, but it's another example of how some simple settings would improve the experience.

It may have many sensors, but there's not a lot you can do with BloomSky's data

There are a few other things that annoy me about the BloomSky. For all of its sensors, there's not a lot you can do with the data they gather. The standard view shows you temperature, humidity, UV Index and pressure, but doesn't really give you any explanation for the figures. What does a "2" on the UV Index mean for my child's skin? Is a pressure of "1017" high or low, and why should I care? Google provided the answers to both of those questions, but it wouldn't take much for BloomSky to add this into its app.

Similarly, there's no way for you to chart the changing weather conditions. You can't even see what the weather was like 20 minutes ago, let alone a day or a week ago. Without context or figures for comparison, all this data seems slightly pointless. Given that the BloomSky is pushing photos to the company's servers every five minutes or so, you'd assume that it wouldn't take much work for them to also upload and store the data that went along with it and let you view it.

The competition (and why this is a tough sell -- for now)

So, minor niggles aside, here's my issue with BloomSky in two words: Dark Sky. The app, currently only available for iOS, lets me see precise weather conditions for the next hour, and, with decreasing accuracy, the rest of the day and beyond. It sends rain notifications, gives me a daily forecast each morning, and even uses the iPhone's sensors to forward pressure data periodically, increasing local accuracy. Remember when I said it was raining lightly and the BloomSky app didn't tell me? Guess how I knew. Dark Sky pinged me to say "Drizzle starting soon," and within two minutes, rain was pitter-pattering on my windows. For the most part, Dark Sky fulfills the promise of BloomSky, but in a $4 app.

BloomSky also isn't the first home weather station by any means. The Netatmo Weather Station offers a very similar array of sensors, and also does some novel things like CO2 and noise detection. It lacks the camera or social features of BloomSky, but it's arguably a more useful addition to a smart home. It also has IFTTT integration, so you could set it up to turn on your air conditioning when the temperature reaches a certain level, or automate the sprinkler example I gave earlier. It also includes all the charts you could ever hope for, along with simple ways to view historical data on your computer or almost any other device you own. (BloomSky is currently limited to iOS and Android.)

Weather sleuthing has been remarkably fun

There's something remarkably fun about having a BloomSky, though, and sleuthing around nearby units to check in on the skies above them. It's also nice to know that I'm contributing to a network, and others can do the same detective work, using my BloomSky to triangulate the gray skies ahead. For now, at least, the time-lapse videos haven't lost their novelty either. I've spent a fair amount of time checking in on some of the videos from more picturesque locations than my unkempt yard.

If you have the spare cash and are sold on the idea of a physical weather gadget for your home, you have to ask yourself this question: What do you want it for? If you're looking for a fun weather camera with basic data that could develop into something more useful, then at $169 (or $269 with the solar panel), the BloomSky is worth considering. If you're just looking to geek out on stats, though, or further automate your home, Netatmo's $149 solution seems like a winner.

I'll be keeping an eye on BloomSky's progress. The sensors are there; they're just not being put to much use at the moment. If the company can improve its app, and add some of Netatmo's charting and IFTTT features, I'd be a lot more inclined to recommend it, as the photos and time-lapse videos are really fun. Until its feature set improves, though, I think a $4 app is enough for me, even if Dark Sky will never provide me with proof that sometimes, just sometimes, the sun does indeed shine on London: In this article: bloomsky, engadgetirl, hands-on, irl, uk-feature, weather, weatherstation
All products recommended by Engadget are selected by our editorial team, independent of our parent company. Some of our stories include affiliate links. If you buy something through one of these links, we may earn an affiliate commission.