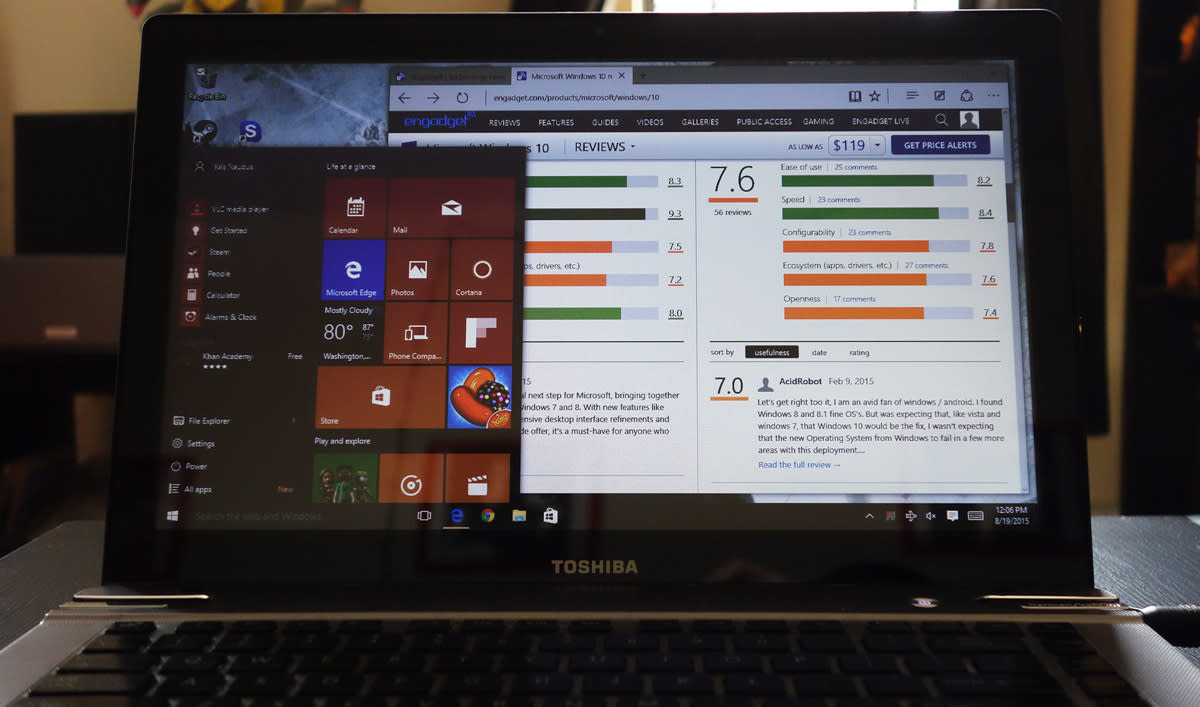 Three weeks have passed since Windows 10 became available for download and, judging by the user reviews left on our product page, it's been one hell of a start. While many users seemed to agree with our positive assessment, a few of you inundated us with tales of woe, ranging from installation issues to slowdowns to crashing apps. We've gathered together some of the best reader reviews below to find out if Windows 10 really is a "must have" upgrade now, or if some of you might be better off waiting for a few of the kinks to be ironed out.

"I feel this OS will be easy to use for all aspects of society, even the non-technical or PC-illiterate users." --ubertiny

Many users' first experience with Windows 10 is going to be the upgrade/installation process, and for most it was quick and painless, with ubertiny calling it "as easy as it can get" and kingtigre finding the operation "smooth as butter." But, while steenbag "was using Windows 10 within 10 minutes of pressing install," jquest71 botched his first upgrade attempt and ThrashedByPC was plunged into "a maddening 72 hours of chaos and frustration," including a download that took over 12 hours.

But even an inauspicious start couldn't sink Windows 10 for jquest71. Once he got it running on his Surface Pro 3, he found the icons "modern and fresh," with full-screen apps working "much, much better" for him than on Windows 8.1. Hamlinpark calls it "simple and uncluttered," and unsivil thinks that "even the most primitive Windows users" will find the new interface easy to understand. 13xforever agrees, saying that changes to things like language preference make "sense for an average user," although they could be a pain in the ass for hardcore polyglots. However, while ethanturk enjoys how the new start menu "functions well and looks great," many others were less enamored with this attempt to blend the old and the new. Nafem says, "It is too long-winded to find anything," with boed finding it "cumbersome" and "less efficient than [the] classic shell." Chingolingo calls it "a lame attempt" at bringing back the Start button, and KenD90027 actually found it to be his "biggest letdown" about Windows 10.

"The return of the Start menu is definitely amazing; the new Edge browser, well, I can say bye-bye to third party browsers now." -- EBD

The Start menu wasn't the only marquee feature that didn't make a splash with our readers. If Windows 10 was supposed to be a lighter, more responsive experience, it went unnoticed by many reviewers, with JesseLim calling it only "marginally faster" and boed not noticing an improvement at all. However, he also "didn't notice any degradation either." DrRockDC's Yoga 2 Pro became sluggish and outright "unusable" in tablet mode, while ThrashedByPC's computer slowed "to a crawl." Still, some reviewers lucked out, with ubertiny finding the OS "extremely responsive" and Sat12321 says, "My laptop boots up in 15 seconds and apps open up in a flash."

Among those apps is Microsoft's new built-in browser, Edge. It loaded quickly and rendered pages well for steenbag, who calls it "a monolithic step forward from IE." EBD even went so far as to say "bye-bye" to third party browsers. But even if jquest71 found that Edge has "worked extremely well so far," there are still a few kinks to be worked out. JesseLim says it takes up "huge resources in Flash- or Java-intensive sites," and Hamlinpark also found a few pages "that seem to have some issues with Edge." However, he still thinks it's "fast and usable."

Cortana was another feature that left reviewers with mixed reactions. Nrao6 was delighted by her ability to set reminders and search the web, but maybe not so much by her jokes. Both EBD and jquest71 found her handy to have around, though the latter noted she's still "a work in progress," explaining why users like light8 may have found her "useless and laggy." Light8 was frustrated by how "she didn't understand what I was saying or didn't respond when I called her," and ThrashedByPC had problems with Cortana "trying to schedule things whenever I tried to use a search."

However, even as users like DrRockDC, light8 and chingolingo find themselves rolling their systems back to Windows 8.1 (or even Windows 7), plenty are willing to stick with this version of Windows, and encourage others to take the plunge as well. Ubertiny calls it a "super-intelligent, clean, user-friendly OS that has all the right stuff in all the right places." Kingtigre says it offers "the promise of a better OS," one that is all about what you need. For nrao6, that means he can "stay focused and get my work done." For KenD90027, it's about being "more modern and secure." And for EBD, it's simply "the best Windows I have ever used."

In this article: microsoft, reviewroundup, userreviewroundup, Windows10
All products recommended by Engadget are selected by our editorial team, independent of our parent company. Some of our stories include affiliate links. If you buy something through one of these links, we may earn an affiliate commission.