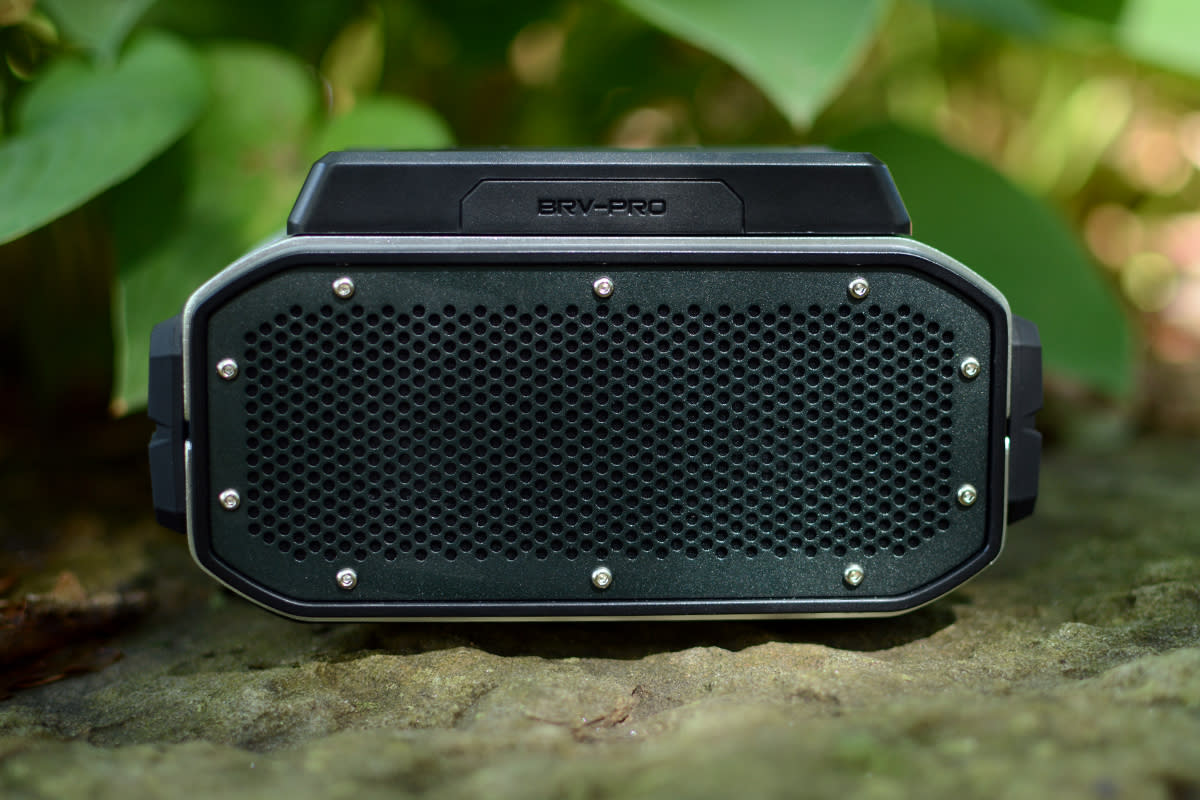 It takes a lot to get me excited about a Bluetooth speaker these days. Although subpar sound quality plagued early devices, newer models offer both good looks and solid audio. Even so, most of the current offerings are same-y; unremarkable. Now, a company called Braven has found a way to evolve the Bluetooth speaker even further, with a large selection of rugged wireless speakers. The BRV-PRO was unveiled earlier this year at CES, and while it certainly looks the part of a weatherproof speaker, it's the optional accessories that make it most compelling -- everything from a solar charging panel to a mount for your action camera. As you can imagine, though, those extras add up quickly. I spent some time with the $150 speaker and the various extras to find out if Braven's latest is worth it. The BRV-PRO is tough. Most of the outer shell is fashioned out of aluminum, with a dozen exposed screws creating a decidedly industrial aesthetic. There's also a good amount of plastic and rubber, including the top-mounted controls. Though the unit I tested had gray accents, it also comes in all black if you prefer a darker color scheme. Speaking of those top-mounted controls, that's where you attach the various accessories. A removable plastic panel protects the dock for those items when you only want to use the speaker itself.

Opposite the black speaker grille up front is a flip-down cap that shields the micro-USB input, USB output, aux jack and other important controls from outside moisture. And yes, the BRV-PRO is waterproof with an IPX7 rating, which means you immerse it in up to one meter of water, or around three feet. The overall package isn't too big either: The speaker hits the tape at 6.4 inches by 2.8 inches and stands 1.5 inches tall. At just under a pound and a half, too, the BRV-PRO won't weigh down your backpack or take up a lot of space. For me, it's the accessories that make the BRV-PRO compelling. The collection includes a solar charging panel, rechargeable battery pack, stacking plates and action mounts for resting your GoPro. At CES, the company also showed off a light panel, but that doesn't appear to be out yet. Of the accessories that are available, prices range from $15 (action mount) up to $50 (solar panel and battery pack). All of these are sold separately from the speaker, so if you're looking to pick up the entire arsenal, expect to shell out around $285.

If you're willing to spend $200, though, you can get the speaker bundled with either the solar panel or the battery pack. While the stacking plate allows you to put a few of the speakers together for a bigger sound, I'd rather have the assurance of up to 40 hours of battery life -- especially on a camping trip with no electricity. You can also charge the extra battery pack separately if you'd prefer. On the other hand, solar recharging would come in handy on a trip that won't include access to electrical outlets. Braven says you'll be able to play the speaker "forever" if you keep the volume parked at a medium level in full sun. Of course, that metal frame might get a little warm if you leave it sitting out all day and you might run into issues after dark as well. Unfortunately, the most important consideration when it comes to Bluetooth speakers is lacking here: sound quality. The audio is noticeably better than the likes of Jawbone's Jamboxes, but it falls short of the UE Boom and Megaboom. Sound is serviceable for casual listening, but bass-heavy tracks suffer the most. The low end sounds muffled beneath crisp highs and mids and doesn't thump as much as I'd like.

My gripes with the sound quality aside, the BRV-PRO is a capable wireless speaker. It just doesn't carry the audio depth and clarity I prefer. All told ,the sound quality is about on par with what I'd expect from a speaker this size, but it certainly didn't wow me. The two UE devices are priced at $200 and $300 each, so if sound is your chief concern, you may want to consider those as well. After spending some time getting to know the BRV-PRO, I can confidently say that the accessories are indeed the main attraction here. For $200, you can get a slightly above-average-sounding speaker and either a solar charging panel or an extra battery pack. In certain situations, I'd take the extra juice over slightly better sound quality. Even more so if I'm planning a remote trek in the woods. However, a speaker that's meant for more than camping needs to offer better sound. The question then becomes if you're willing to splurge for a gadget that's waterproof and could last a good portion of the weekend. Personally, I'd have a tough time saying no.

In this article: audio, bluetooth, braven, brv-pro, engadgetirl, IP67, irl, rugged, RuggedSpeaker, speaker, waterproof, wirelessspeaker
All products recommended by Engadget are selected by our editorial team, independent of our parent company. Some of our stories include affiliate links. If you buy something through one of these links, we may earn an affiliate commission.