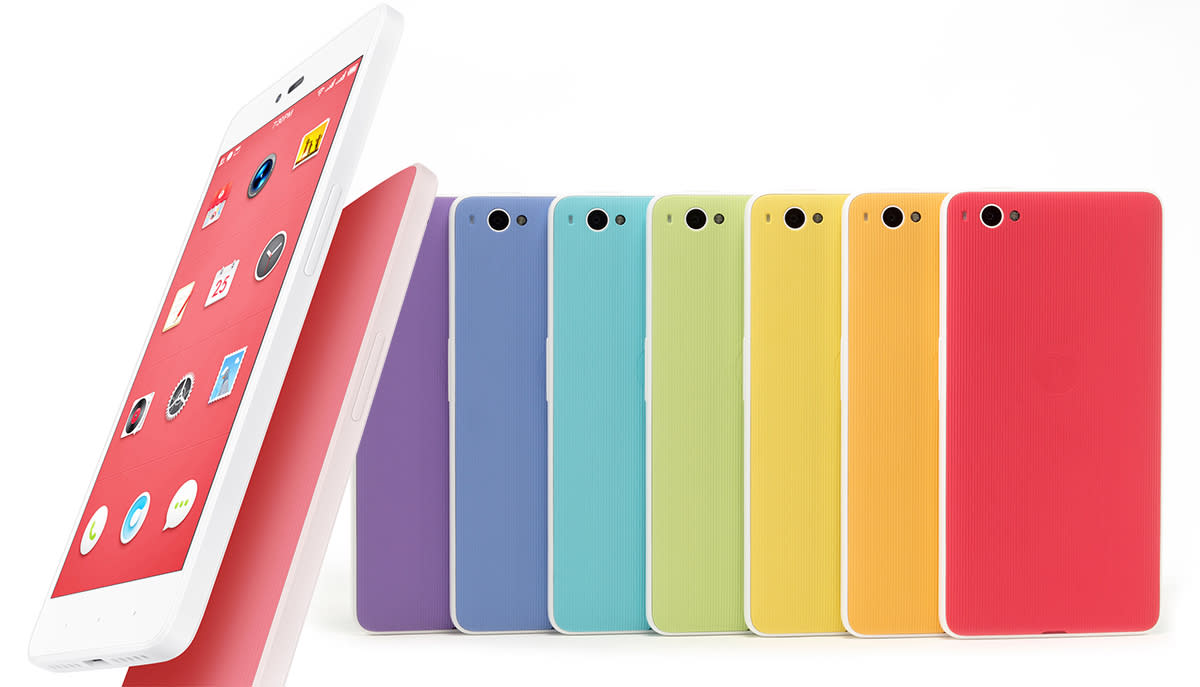 For those who still remember, it's been well over a year since China's Smartisan launched the T1, which turned out to be a surprisingly good effort from the teacher-turned-entrepreneur, Luo Yonghao. Today, the startup has finally launched its second Android device, the U1 aka JianGuo (which means "nuts" in Chinese), to cater to the younger audience with an 899 yuan (about $140) base price. That's about the same as the Redmi Note 2, though some may find this to be a more fun design with what's arguably a more intuitive interface, as we first saw back in April 2013. Like the T1, the U1 features a volume rocker on both the left and right sides of its body. This symmetrical design allows the user to set one side for volume, and the other for screen brightness. One bonus use case with these is that when on standby, you can press and hold both keys to instantly take a photo, as opposed to having to first turn on the phone, then toggle the camera app and finally hit the capture button. Another design cue taken from the flagship line is how the proximity sensor is tucked into the same ditch as the earpiece, thus giving a cleaner look on the front side of the white phone.

What obviously sets the T1 and the U1 apart is the back cover design. The newer model comes with seven rainbow color options, each featuring a soft skin texture with vertical stripe pattern. Better yet, the phone's software can switch to a color theme that matches the back cover, unless you choose to stick with what you were using. Smartisan will also be selling some limited edition covers to commemorate special occasions -- like the launch of the world's first instant noodles 57 years ago today -- for 99 yuan (about $15) a piece, about 30 percent of which will go towards a fund to support the open source community. The more exciting part of the U1 is its highly-customized Android ROM. Like before, Smartisan OS is all about keeping it clean with a simple three-by-three grid layout per page, but you can also zoom out to a six-by-six or even a nine-by-nine layout (you'll want to read our in-depth OS walkthrough and device hands-on). With the upcoming version 2.0 release due September 15th, you'll be able to sort the icons by time of installation, frequency of usage and even color, as pictured above.

The update also offers new cool features like a visual indication of which app is making noise in the multi-task manager, a beefed-up screenshot tool which can now automatically capture an entire page (rather than manually scrolling through to take multiple screenshots), disc scratching in the music app, integrated business card scanner (17 languages supported) and a speedy local voice search tool.

Last but not least, given that 39 percent of Smartisan users switched from an iPhone, the company is also offering a desktop app dubbed SmartFinder as a much friendlier alternative to Android File Transfer. There's no word on global availability just yet, but folks in China will be able to buy a U1 on September 1st, with the 16GB version going for 899 yuan (about $140), and the 32GB version for 999 yuan (about $160). Even though these are already relatively low prices, Smartisan took a step further to offer an instalment plan for as low as 75 yuan ($12) per month, which should make lives easier for students. But if you're still saving up for Smartisan's next flagship device, the T2, then you'll have to wait until its December launch event.

In this article: android, china, luoyonghao, mobilepostcross, phone, smartisan, smartisanos, smartisanos2, smartphone, u1
All products recommended by Engadget are selected by our editorial team, independent of our parent company. Some of our stories include affiliate links. If you buy something through one of these links, we may earn an affiliate commission.