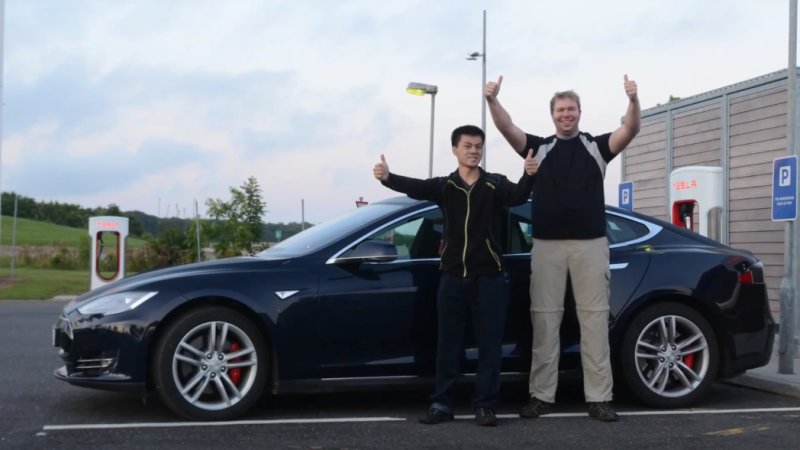 There's a reason this guy's so popular. Bjorn Nyland might be familiar to readers because he just earned himself a free Tesla Model X by successfully getting ten people to buy a Model S. He was able to promote the all-electric car so well because he's been doing it for ages. He's proven the capability of the S by taking it 233 miles on a charge even in the deepest, darkest Norwegian winter. He also knows how to wring a lot more miles out of an electric car when the weather's warm. A little over 452 miles, to be exact.

Decked out in a Model S with a "Slow" sticker on the rear end, Nyland and his friend Morgan Tørvolt drove for 18 hours and 40 minutes at an average speed of just 24.2 miles per hour (ouch) to get 452.8 miles out of their battery pack. They started and ended at the Supercharger station in Rødekro, Denmark. That's an extreme bit of hypermiling that I think throws down the challenge gauntlet to Wayne Gerdes or anyone else who wants to see just how far a big EV with two people inside can go. Unsurprisingly, the duo did the drive in a P85D, which has an 85-kWh battery pack, the biggest Tesla currently sells. A P90D model is on the way, so we'll open up the floor to comments to see how many miles you think can be be stretched out of an extra 5 kWh. Pure math would say Nyland and Tørvolt got 5.3 more miles per kWh, which would translate to 26.5 more miles. Somehow we think that's a floor, not a ceiling.

The previous record for hypermiling an 85-kWh Model S was set by the father-son duo of David and Adam Metcalf in last 2013. Their record was 423.5 miles. The Metron 7 team took their modified all-electric Mazda minivan 513.3 miles on one charge, but that was using a 108-kWh pack.
All products recommended by Engadget are selected by our editorial team, independent of our parent company. Some of our stories include affiliate links. If you buy something through one of these links, we may earn an affiliate commission. All prices are correct at the time of publishing.
View All Comments
There's a new Tesla Model S long-distance record: 452.8 miles