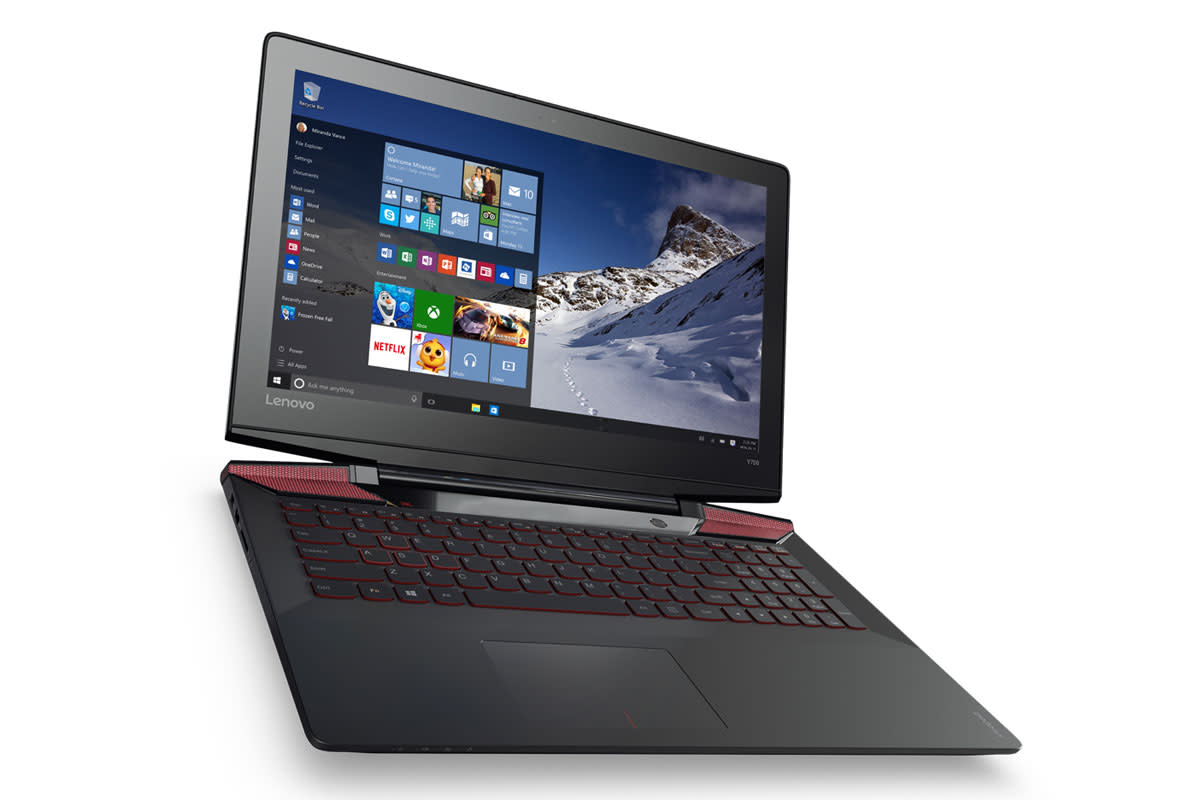 Lenovo probably isn't the first brand you think of when you're looking for a gaming PC, between its reputation for business PCs and its frequently frugal designs. However, it's definitely trying to improve its gamer cred today. The system builder has trotted out three Y-series computers that match the requisite speed boosts with more flair than you're used to from Lenovo. The IdeaPad Y700 laptop you see above has the expected choices of the latest Intel (sixth-generation Core) or AMD (Carrizo-based A10) processors, but it also sports more angular, attention-getting 15- and 17-inch designs. Those red JBL speakers are bound to catch your eye, even if the Y700 isn't quite as ostentatious as other portable gaming rigs. The Y700 line also touts the hardware options you'd expect circa late 2015, including a 4K touchscreen, an Intel RealSense camera (handy for facial recognition in Windows 10), up to 16GB of RAM, optional GeForce GTX 960M or Radeon R9 graphics and storage that can include both a 1TB conventional hard drive and a 512GB SSD. Lenovo expects these laptops to sell for $799 and up when they ship during the holidays. You won't get the fanciest features at that price, but that's a solid value if you just want a reasonably fast machine.

And don't worry, desktop fans -- you're covered as well. Both the IdeaCentre Y700 and Y900 have "fun" red LEDs (seriously, that's how Lenovo puts it) that add a splash of color inside and out, and they pack sixth-generation Core i7 chips, higher-end NVIDIA video cards and four hard drive bays. Which PC you choose is really a matter of raw performance. The Y700 desktop starts at $999, and handles up to a single GeForce GTX 970 graphics card and 32GB of RAM; splurge on the Y900 ($1,599 and up) and you'll get an overclock-friendly processor, up to two GeForce GTX 980 boards and as much as 64GB of RAM. While neither is likely to make you forget about your custom-built dream PC when they arrive this holiday, they might do the trick if you're looking for an off-the-shelf gaming fix.

In this article: amd, carrizo, computer, desktop, gaming, ideacentre, ideacentrey700, ideacentrey900, ideapad, ideapady700, ifa, ifa2015, laptop, lenovo, pc, skylake, windows10, y700, y900
All products recommended by Engadget are selected by our editorial team, independent of our parent company. Some of our stories include affiliate links. If you buy something through one of these links, we may earn an affiliate commission.