Lumia 950 XL vs. the competition: The big flagship phones are here 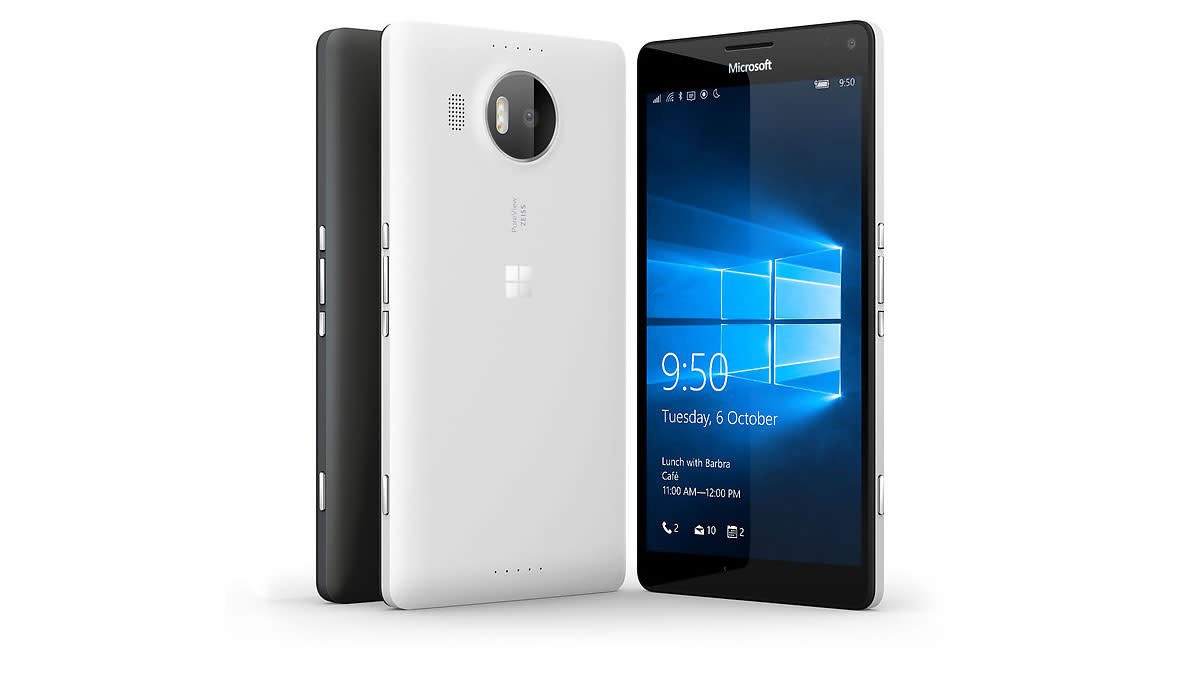 While the Surface Pro 4 may garner the bulk of the attention from today's Microsoft event, the folks in Redmond had other stuff to reveal, too. Those other announcements include a pair of smartphones, one of which is the supersized Lumia 950 XL. Thanks to a handful of leaks, we already had an idea what the handset would look like and some details of its spec sheet. The 950 XL features a larger OLED screen than its sibling, measuring 5.7 inches at 518 ppi. It also offers 32GB of storage that you can expand via microSD card up to a whopping (theoretical) 2TB. There's a 20-megapixel camera with a Zeiss lens around back with triple LED RGB natural flash, optical image stabilization and a dedicated camera button as well, continuing to leverage the photo chops from Nokia. That wordy flash description basically means people will look more natural in photos where you have to employ said feature. And, of course, all of that runs on Windows 10. The new Lumias both pack in adaptive antenna tech that works to give you the best connection possible at all times. The 950 XL also carries a 2GHz Qualcomm Snapdragon 810 octa-core processor and liquid cooling that was originally developed for the Surface tablet. Microsoft gave both of the new Lumia phones something it calls Glance Screen technology that'll show you missed calls, emails, time, date and more just by taking a look at the display. The duo also features USB Type-C connectors for 5 Gbps transfer speeds and quick charging that can hit 50 percent in 30 minutes. There's also a Display Dock that has connections for HDMI, DisplayPort and three USB jacks that'll allow you to use the handset with a monitor. And thanks to Windows 10 universal apps and Continuum, you can employ those handy Office apps to get work done at your desk... with your phone. If all of that sounds too good to pass up, you'll have to wait until November to get your hands on the 950 XL. When it arrives, expect to shell out $649 to nab one.

In this article: 950xl, carlzeiss, cellphone, cellphones, lumia, lumia950xl, microsoft, mobilepostcross, phone, phones, windows, windows10, windows10devices, windowsmobile, zeiss
All products recommended by Engadget are selected by our editorial team, independent of our parent company. Some of our stories include affiliate links. If you buy something through one of these links, we may earn an affiliate commission.