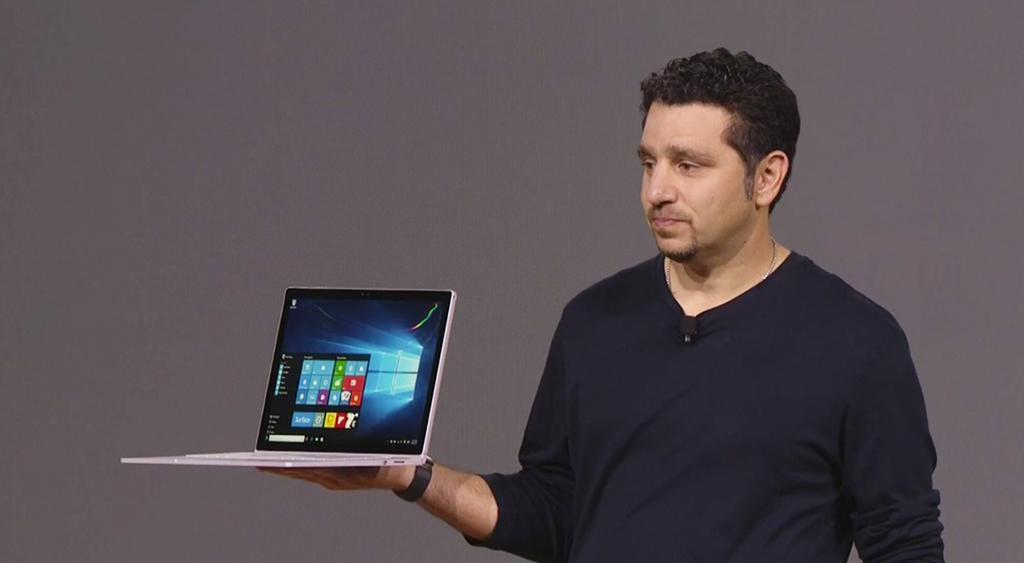 And then Microsoft dropped a bombshell on stage. "What if you wanted a Surface -- but you wanted a laptop Surface, something with a bigger screen, something with the perfect typing experience of a laptop?" Microsoft's Panos Panay asked at the company's Windows 10 devices event. "We made the ultimate laptop; we made Surface Book." That's right, it's Microsoft's first in-house laptop -- with a 267 ppi, 13.5-inch display, a sixth-generation Intel Core processor, up to 16GB of RAM and a claimed 12-hour battery life. Microsoft is calling it the "ultimate" laptop ...but just like every other Surface in the product line, it's still a detachable, convertible PC. In a surprising, onstage moment, Panay plucked the Surface Book's screen off of its keyboard. Yes, this Surface is still a Surface, but its bottom half is more than a fancy keyboard cover -- it houses a discrete NVIDIA GeForce GPU and other components that, according to Microsoft, make it twice as fast as the MacBook Pro. That's a bold claim, and while Microsoft didn't exactly back it up with stats, watching Panay show off video of Gears of War running on the Surface Book onstage and then immediately editing footage from the game in Adobe Premiere Pro poses a pretty strong argument.

Naturally, the tablet will pop back onto the book's "Dynamic Fulcrum" hinge in either direction, though the hinge itself doesn't appear to bend all the way backward. It also supports the Microsoft Surface Pen (it's included, actually) and the Surface Pro dock. It's easily the most surprising, intriguing device Microsoft has put out in a while -- with a sleek-looking design, a fascinating and weird hinge and a lot of versatility. Pre-orders start today and the product will hit stores on October 26th, starting at $1,499 (for the 128GB/8GB Core i5, Intel HD graphics configuration) to $2,699.00 (512GB/16GB, Core i7, NVIDIA GPU). Is it worth it? We'll let you know as soon as we get our hands on it.

In this article: laptop, microsoft, microsoftsurfacebook, nvidia, surfacebook, windows10, windows10devices
All products recommended by Engadget are selected by our editorial team, independent of our parent company. Some of our stories include affiliate links. If you buy something through one of these links, we may earn an affiliate commission.