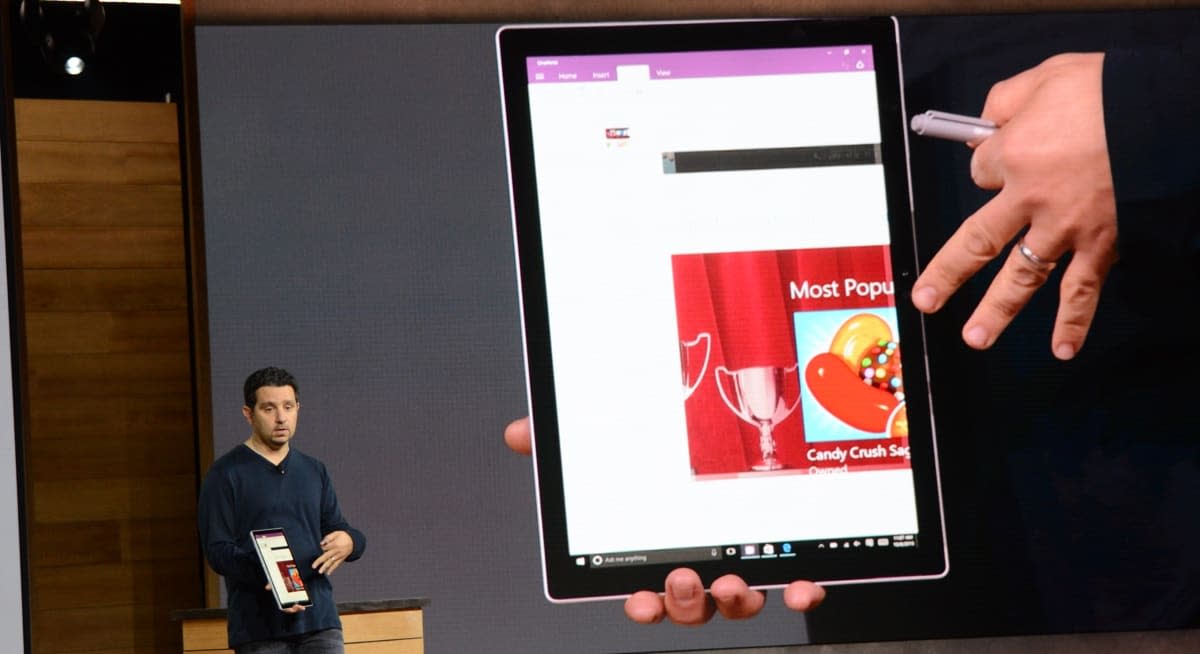 In the span of a few years, Microsoft's Surface has gone from a genuine surprise, to a big disappointment, to a solid hybrid tablet (thanks to the Surface Pro 3, and to a lesser extent the Surface 3). Now, we have the Surface Pro 4, which comes just in time to go toe to toe with plenty of other Surface-like competitors, including Apple's new iPad Pro, Lenovo's Miix 700 and Dell's rumored new XPS 12. It looks pretty similar to last year's model, but it's thinner at 8.4 mm and sports a larger 12.3-inch display. However, the revamped specs and the fact that it was built specifically for Windows 10 might make it a much bigger draw than past Surfaces.

The new display uses something Microsoft called PixelSense technology with the thinnest optical stack on a screen that pushes over 5 million pixels with over 267 ppi. It also supports 1,024 levels of pressure with the new pen (which now sports an eraser) that attaches magnetically to the new Surface. The Surface itself has up to 16GB of RAM and up to an impressive 1TB of storage. A sixth-generation Core Intel processor (up to a Core i7) runs the entire thing.

Like the Surface itself, the Type Cover is thinner and lighter. The trackpad is 40 percent larger and the keyboard has been upgraded with more space between the keys and better travel at 1.3mm. A lot for a cover this thin. The new Type Cover also works with the Surface Pro 3.

With Microsoft Hello, the front-facing camera can log you in to the computer with your face and other biometric inputs including the fingerprint scanner found on the keyboard.

A new dock is also available with four USB 3.0 ports, two 4K DisplayPorts and Ethernet and like the new Type Cover will work with the Surface Pro 3.

The Surface Pro 4 starts at $899 with pre-orders available today. It will be released starting on October 26th with some configurations arriving later in the year.

In this article: microsoft, mobilepostcross, Surface, SurfacePro4
All products recommended by Engadget are selected by our editorial team, independent of our parent company. Some of our stories include affiliate links. If you buy something through one of these links, we may earn an affiliate commission.