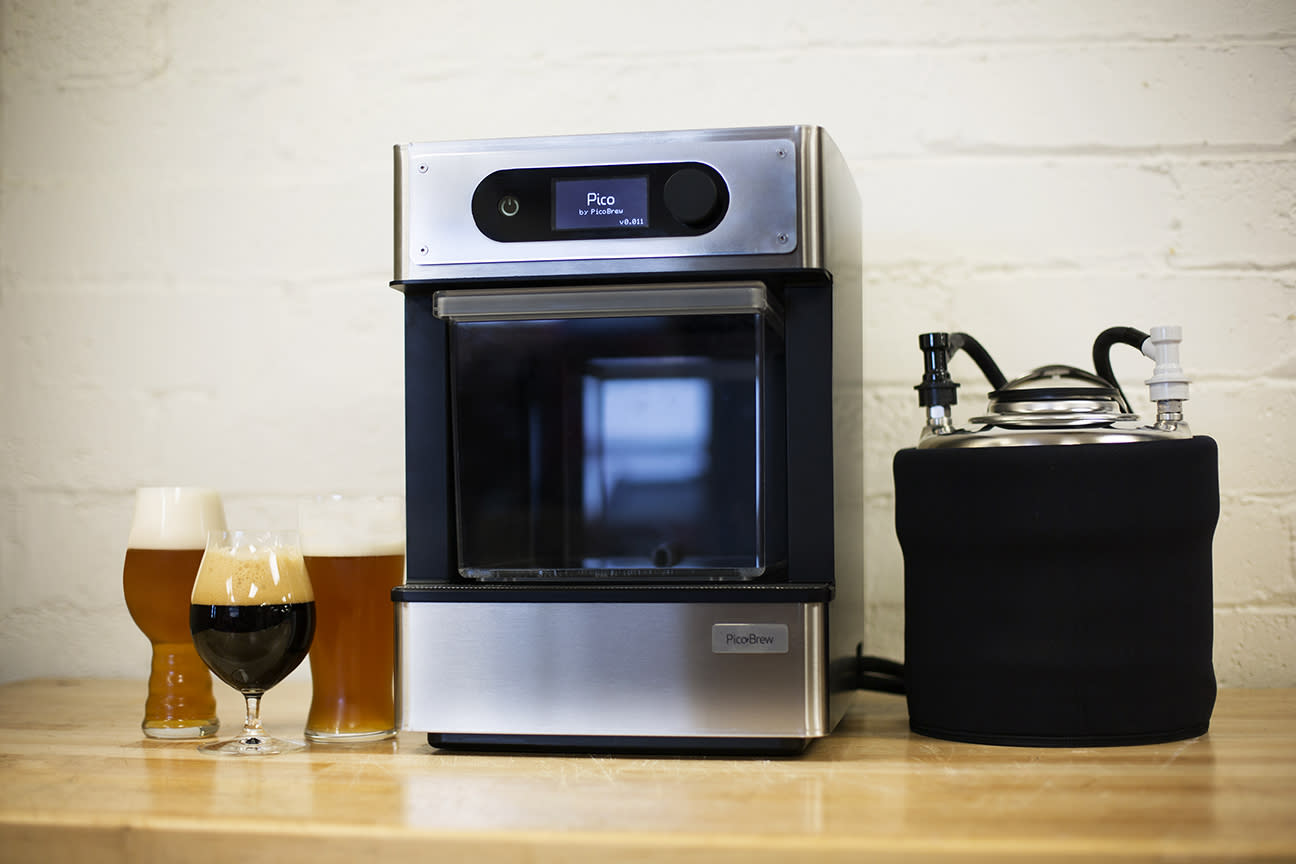 PicoBrew is hoping to do for homebrewed beer what Keurig has done for coffee. It tried previously with the Zymatic, but the $2,000 price tag, intimidating size and complexity limited its appeal. Really the Zymatic ended up being for professional brewers to experiment on and for people with deep pockets looking to dip their toe into homebrewing with the least amount of effort possible. The company's new machine, the Pico attempts to address some of those hurdles. First, off, it's dropped the price dramatically. If you move quickly to pick it up through the Kickstarter campaign launching today it will only cost you $500, though it will climb to $1,000 at retail. Second the Pico is roughly half the size of the Zymatic, and can actually fit on an average counter-top. Though, does still take up a significant amount of space and probably wouldn't find a permanent home next to your coffee machine.

Most importantly though, it greatly reduces the complexity of making beer. You don't build a recipe with an app or order individual packets of hops or pounds of grain. Instead you order PicoPaks: prepackaged boxes of grain and hops that you simply insert into the machine. Inside a scanner reads a barcode on the top and downloads the recipe from PicoBrew's database. You can adjust the ABV (alcohol by volume) and the bitterness with a simple tun of the dial, but otherwise everything is automated. Even the idea of tweaking those parameters is hiding their inherent complexity. What you're really doing is changing the timing of your hop additions, the boil time and your mash temperatures.

The process of brewing with the Pico is simple enough. You connect a mini-keg filled with water and insert a PicoPak. The machine then recirculates the water over a heating element until it reaches the prescribed temperature, and runs it over the grain to extract the sugars. (This is called the mash and the sugary liquid you end up with at the end is the wort.) The computer inside keeps the temperature consistent to maximize efficiency -- the more sugar, the more potential alcohol. After that the Pico runs the wort over the heating element again bringing it to a boil before feeding over the hops at specific times. Once that's done the Pico begins cooling the wort so that you can add the packet of yeast that came with your PicoPak.

Those PicoPaks are what set the Pico apart. There are over 100 to choose from, including branded ones from commercial operations like Rogue, Dogfish Head and Elysian. And if you really want to push the boundaries of what you can do with the Pico you can sign up for the PicoBrew Development program. Here you can create and submit your own recipes which are tested and approved by certified BJCP (Beer Judge Certification Program) judges. If they're approved you can sell them on the BrewMarketplace alongside the those professionally created PicoPaks.

At the end of the day the Pico isn't terribly different from something like a Nespresso. The goal is to deliver a home-made craft beer product with as little effort as possible. It's never going to be the same as firing up a kettle in your kitchen and filling a carboy with wort your boiled on your own stove. But then again, the Pico should make less of a mess.

In this article: beer, hands-on, homebrew, pico, picobrew, video, zymatic
All products recommended by Engadget are selected by our editorial team, independent of our parent company. Some of our stories include affiliate links. If you buy something through one of these links, we may earn an affiliate commission.