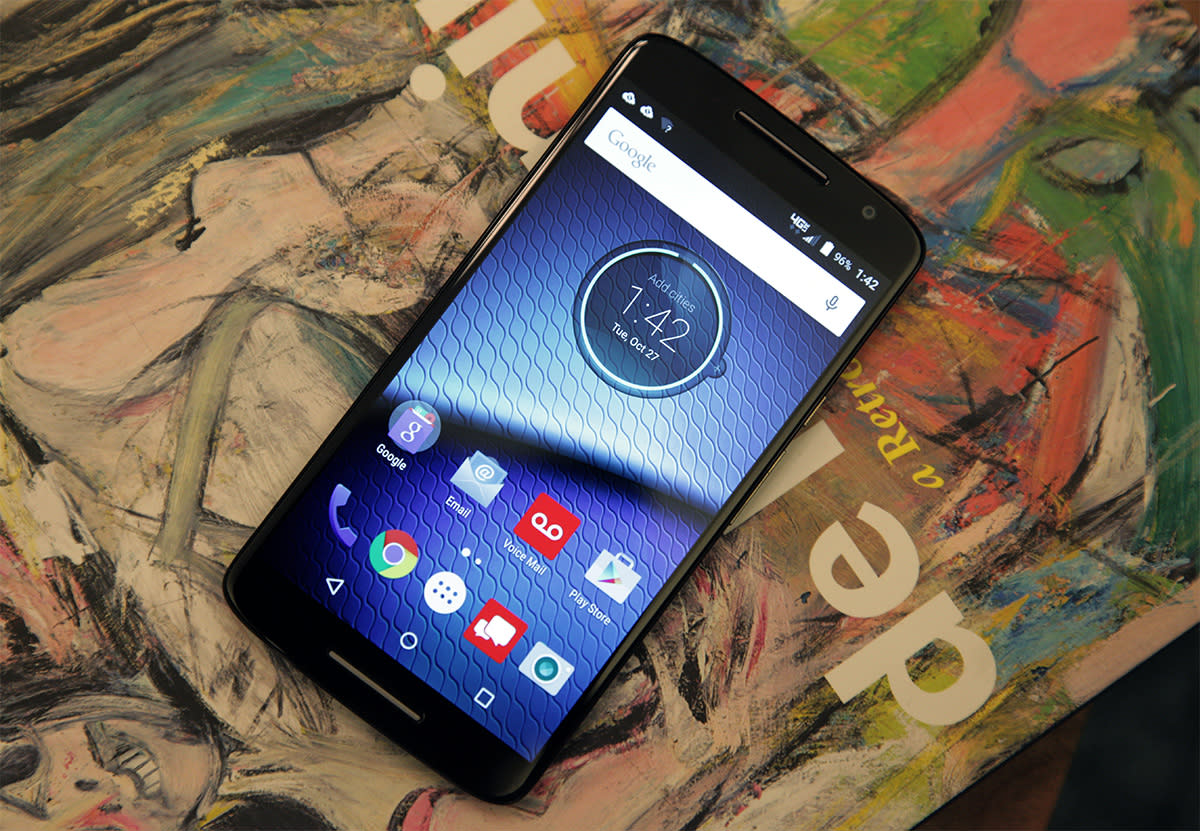 Verizon and Motorola didn't just announce the Droid Turbo 2 today — the two smartphone buddies also confirmed the arrival of the Droid Maxx 2. The thing is, the Maxx 2 is really just a Verizon-customized version of the Moto X Play, a neat little mid-range device we reviewed earlier this year. In case you hadn't read Aaron's full report, it's a solid addition to the Moto X line up with a badass battery, and the changes we got in the American version are minimal. Well, most of them are, anyway. Obviously, one of the X Play's biggest strengths is the near-stock version of Android it runs. It shouldn't shock you to learn that's not the case for its US counterpart -- it comes with 9 Verizon apps preloaded, along with a bunch of games and Amazon apps that are of dubious value at best. Throw in some decidedly non-stock Motorola widgets and first-party apps and you've got a device that looks like an X Play but doesn't really act like one. That said, the Maxx 2's handsome 5.5-inch 1080p display still leaps to life when you wave a hand over it, and most of the other contextual tricks seen in recent Moto Xs work the way you'd expect them to. Oh, and about that screen? It's not nearly as saturated as the one Motorola stuck in the Turbo 2. For most people, I suspect that's a very good thing.

From what I can tell, everything else here works the way it did on the original X Play. Performance was mostly snappy (though not without the occasional hiccup) thanks to the Snapdragon 615 chipset and 2GB of RAM, and the camera seemed at least above-average in the strangely dim demo area Verizon set up for us. Build quality seems perfectly adequate too, though it's not quite as beefy as the nigh-unbreakable Droid Turbo 2. What's really exciting about the Maxx 2 is its enormous 3,630mAh battery -- Motorola says it's last you about 48 full hours of mixed use, and that's about what we got during our testing of the original phone too. In an age where your social life often dies with your smartphone, this is very, very good news indeed. Tempted? You'll be able to grab your own 16GB Droid Maxx 2 in just a few days, and it'll set you back $384 (or $16/month, if you're a payment plan person).

In this article: android, droid, droidmaxx, droidmaxx2, google, handson, maxx2, mobile, mobilepostcross, preview, smartphone, verizon
All products recommended by Engadget are selected by our editorial team, independent of our parent company. Some of our stories include affiliate links. If you buy something through one of these links, we may earn an affiliate commission.