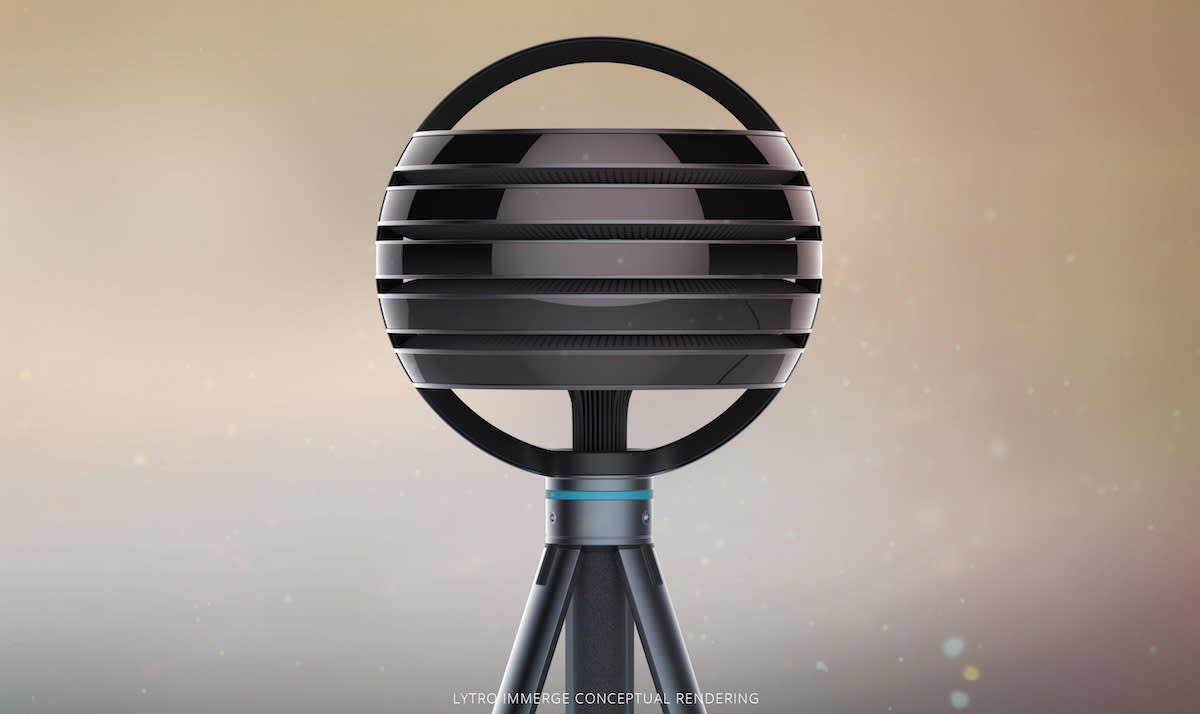 Lytro first made a name for itself with a small rectangular camera that did one magical thing: It allowed you to refocus photos after you've taken them. It did this trick thanks to some complex software and the camera's unique light field technology that captures millions of rays of light. Last year, Lytro applied its light field technology yet again with the Illum, a DSLR-like camera with an even larger image sensor and more robust hardware. Over the past year, however, Lytro has been hard at work applying its light field expertise in a whole new arena: Virtual reality. Today, the company has announced the result of that work. It's called the Lytro Immerge, and it's the essentially what Lytro is calling the first ever light field powered professional VR capture camera.

It all started a year ago as the company was coming to market with the Illum. "We started hearing from all these virtual reality filmmakers and content creators," says Lytro CEO Jason Rosenthal. "All these people were coming up to us and saying light field is basically the only way we'll be able to accomplish what we want to do." Currently in the VR space, there aren't that many great professional tools for creating content -- most are stuck with trying to force 2D cameras to capture 3D video, he says.

The Immerge, however, is different. Instead of having to capture several different shots and stitch them together, the Immerge uses a super dense light field array to capture the entire 360-degree image. "Most of the work we've done in light field today is in a planar light field. But imagine if you took that plane and basically bent it into a full sphere, so that it would capture the light rays from every single direction in a geometric volume. It would be something like this," explains Rosenthal.

Basically, think of this giant sphere as a large VR sensor. There are five different layers, and each layer is packed with a ring of 360-degree cameras and sensors. "One of the layers represents somewhere between three and four times the data and resolution of any VR camera that exists today," says Rosenthal. "And we're doing that times five. It's a massive leap forward in terms of the way we capture and sample the real world." This, he says, allows for accurate horizontal and vertical parallax, which is needed to realistically incorporate CGI elements in the video and have them appear as part of the natural environment. It also enables six degrees of freedom, so the viewer can look all around them to see the entire scene.

Lytro has already been in talks with several VR startups like Vrse and WeVR to help create the Immerge, and they'll likely be one of a few of the Immerge's early customers. The company has also been in talks with traditional Hollywood studios like Disney and Warner Bros. "They're running a bunch of experiments in VR and AR content, developing them side-by-side their movie shoots."

As you might have guessed, the Immerge is a professional-grade tool, and is not meant for consumers. It'll be publicly available in Q1 next year for rental and sale. To buy it will likely cost hundreds of thousands of dollars, Rosenthal says, while renting it would probably be for a few thousand a day. He wouldn't comment on how much it'll actually cost just yet.

So where does this leave Lytro's existing camera business? Does that mean it's shifting focus? Well, not quite. Lytro is planning on rolling out an Illum software update later this year, after all, Rosenthal says. "This is very consistent with where we've been and where we've always wanted to go," he says. "The world moved from being film-based to digital. We were in early phases of moving from 2D digital to 3D computational light field. Our focus has always been how do we make that happen, and how do we build a platform around it."

"Now with the exciting evolution of new areas of imaging like AR and VR, we've had a big evolution of the company in the last year," he says. "Because of our expertise in light field, we like to pretend we're visionaries."

In this article: lytro, lytroimmerge, virtualreality
All products recommended by Engadget are selected by our editorial team, independent of our parent company. Some of our stories include affiliate links. If you buy something through one of these links, we may earn an affiliate commission.