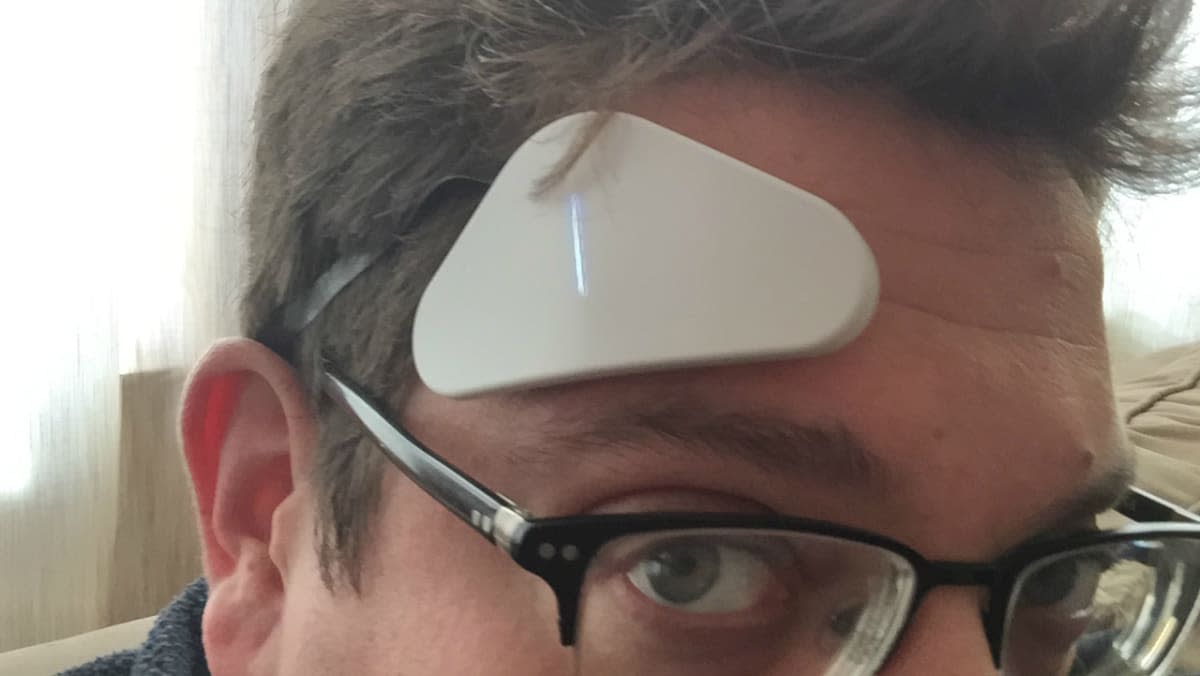 For years I've relied on caffeine and cannabis to modulate my moods. It's an effective, albeit slightly illegal, system and not without its side effects. Too much coffee and I become a jittery, hyperactive mess. Too much cannabis and I spend the next few hours taking a weed nap. But that's where the Thync comes in. It's a tiny, head-mounted device that is supposed to discretely modulate your moods by gently zapping your brain with pulses of electricity. But can the power of Tesla really get me out of an emotional funk the way a doppio espresso and some dab rips can?

The Thync retails for $300 $200 and comes with four five-packs of adhesive strips: two sets for calming, the other two for energizing. The device attaches to a strip and sits atop your right temple. The other end of the strip is then affixed to either the bone behind your right ear or a the base of the skull, depending on the effect you're looking for. The energizing strip, which goes behind the ear, closes the circuit of the facial nerve. This nerve controls your "Flight or Fight" response; stimulating it reportedly increases alertness, motivation and energy levels. Conversely, the calming strip, which connects at the base of the skull, completes the cervical spine nerve circuit and results in feelings of relaxation. As the Thync module pumps out electricity (up to 20 milliamps) during each five- to 20-minute session, the pulses excite these nerve pathways, instigating the desired effect. Or, at least, that's how it's supposed to work. I recently spent some time electrocuting my nervous system to see just how much the Thync can affect my mood and, quite honestly, the results were all over the board. The Energize strips had the most obvious effect, even at lower intensity settings. The Awake program noticeably boosted my alertness, though I can't be sure if that was because the device was properly stimulating my facial nerve or it was just shocking the side of my head. The Workout program provided a more intense tingling sensation but failed to motivate me to get up and exercise. The Surge program simply felt like someone licked a couple of 9-volt batteries and smashed them into the side of my head. The Holiday lights program, however, was nuts. It's designed to make seasonal decorations twinkle more vividly. But when I tested it in a traditionally lit room, all it did was make my vision strobe; it was akin to someone rapidly cycling the room lights. That made me rather nervous, to be honest, and quite unwilling to give it a second try.

The Calming strips, on the other hand, had virtually no effect on me. Even on the highest intensity settings and most powerful program, I barely noticed anything. These routines are supposed to result in a sense of serenity and general well-being -- "similar to how you would feel after a glass of wine or an hour of yoga," as a company rep explained it to me. I guess I felt something like that? With the Sleep program at 96 percent intensity I was indeed pretty mellow, but the second I started thinking about work, family and all my daily hassles, my stress levels went right back through the roof. There certainly wasn't any euphoria in the experience, as I had expected. According to Thync, at least, the effects are supposed to be a bit longer-lasting: up to an hour. "We don't have direct feedback from all users," the spokesperson said, "but we do have ratings, and the vast majority of users are in the 'good' to 'great' spectrum for ratings."

This discrepancy between what I felt and what I "should have" felt isn't that surprising, really. As with the self-reported pain scale that physicians use, what one person considers a significant sense of relaxation might not even register with someone else. As such, it's difficult to predict if the device will have the same effect on you that it had on me. There's also precious little literature on what happens when you develop a resistance to these electrical shocks. I noticed within the first couple of sessions that I had to keep dialing up the intensity to get the same effects as the first few. To ensure that it wasn't just me, I enlisted the help of some suckers friends and had them put the Thync through its paces as well. Their experiences were equally scattered, with each person diverging on everything from the most comfortable intensity setting and session length to the physical and psychological effects that they felt.

The system can also get expensive quickly. Each strip lasts between one and five uses, on average. So if you're applying one of each strip daily and reusing it four more times, you'll still run through a pack a month -- or $40 total. That's $480 a year. I also took umbrage with the fact that, nearly a year after debuting, the system is still only available for iOS (Update: Per a company rep, the Android edition will be made available in December). What's more, the Thync is currently only available in the US.

The app itself was a bit of a pain as it repeatedly insisting on walking me through the initial setup video every time I paired the device to a new test phone. Once you get through the walkthrough, however, the entire "vibe" experience is controlled with just six onscreen buttons so day-to-day use is pretty straightforward and intuitive. Overall, I remain unconvinced that this thing consistently does what it says it's supposed to. I'm not really sure how or why it works the way that it does and those aren't the sorts of questions I really want to have when pumping current through my skull. That's not to say it's dangerous -- there are peer-reviewed studies suggesting that this device is harmless -- but just, I mean, look at that warning list up there. What's more, $300 $200 to start and another $40 a month for a device that may or may not work seems like an expensive and unnecessary gamble when there's perfectly good weed and coffee at my disposal.

In this article: brain, electronics, engadgetirl, hands-on, iOS, neural, neuralstimulant, thync
All products recommended by Engadget are selected by our editorial team, independent of our parent company. Some of our stories include affiliate links. If you buy something through one of these links, we may earn an affiliate commission.