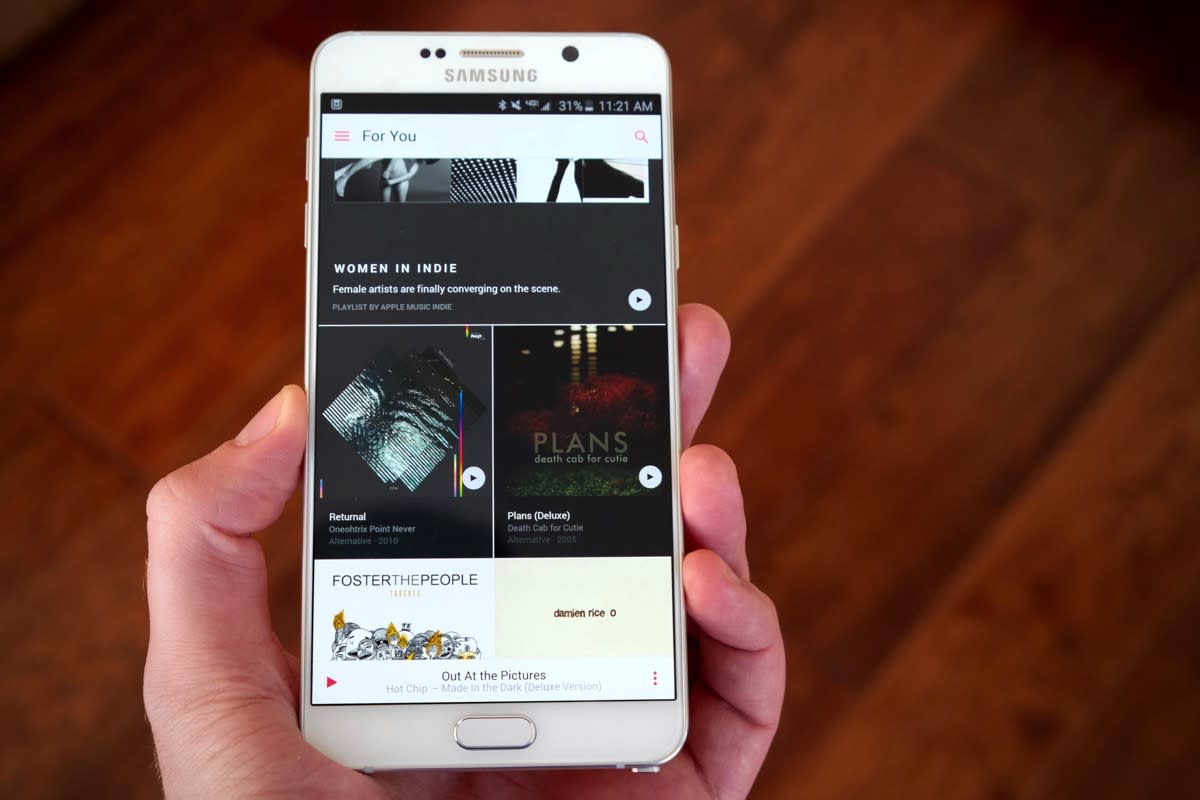 Steve Jobs once famously said that launching iTunes for Windows was "like giving a glass of ice water to somebody in hell." Well, Apple has a second glass ready today: the company just released a beta of Apple Music for Android, the first app that really gives Android users a taste of one of Apple's flagship services. If you've used the somewhat-jumbled Apple Music app on iOS, you'll be quite familiar with its Android counterpart -- nearly all of the service's features are intact, and the user interface is a surprisingly tasteful blend of what Apple put together for iOS that still feels native to Android. After downloading and installing Apple Music from Google Play, you'll be prompted to either begin a free trial or log in if you're already a current subscriber. (If you don't sign in, you can listen to ad-supported radio for free.) Once you're set up, you get dropped into the "For You" tab, which pulls together curated playlists and albums recommended based on your listening habits. There's a host of other ways to browse the huge amount of music on the service. "New" features new music that you can drill down into by genre; there's also a host of playlists to browse based on genres and activities that are created by the Apple Music editors and a number of contributors. "Radio" features Beats 1 as well as genre-based stations that'll continuously play and update based on your preferences. "Connect" gives users a way to follow artists and see what the post -- usually it's Instagram-style photos, but they may also link to specific songs or playlists as well.

Finally, there's "My Music," which includes everything you've added to your library, either through Apple Music or via songs that you've added to your iTunes account over the years. Playlists are helpfully broken into their own area rather than grouped under My Music as they are in iOS. That's a lot of different ways to browse your music, and Apple Music remains one of the less streamlined and more complicated music services out there, at least at first glance. After using the service for more than four months, I know where to look for what I want to find, but new users will surely need to take some time figuring out what kinds of content each section features.

Apple Music remains complicated at first glance, but there's a lot of good stuff to find.

Once you get your bearings, though, there's a lot to like about Apple Music. Launching later on Android was a smart move, because the app feels much less buggy than its initial iOS release did. Using the Android version really does feel indistinguishable its the iOS counterpart. In a few ways, in fact, the app feels less cluttered and more streamlined than the iOS version. Having the service's main content areas tucked away to the left of the screen under the standard Android "hamburger" button saves some screen real estate compared to the iOS app's ever-present bottom navigation buttons. And while there are plenty of three-dot icons throughout the service that bring up more options, those menus have been mercifully trimmed down -- there's no ever-present option to create a genius playlist, for example.

As for the content itself, the best parts of Apple Music are all here. The service's curated playlists remain one of my favorite ways to listen to music. Every music service has its own vision for surfacing the insane amount of music available, and Apple's feels like the company is putting together structured mix tapes across a huge variety of activities, genres and musical moods. Google Play Music has done a similarly great job by gathering up radio stations with a similar focus on activities and moods, but I find Apple's approach of picking specific songs and crafting a playlist a bit more satisfying than hoping that an algorithm picks the right songs for me.

Another great thing about Apple Music is that it combines songs you add from the service's streaming catalog alongside any music you've added to your iTunes collection over the years. Again, it's something Google Play Music lets you do as well, but most other streaming services have no way to integrate music you've added to your collection over the years that might not be part of the streaming catalog. Having all the various live bootlegs and remixes and albums from small bands live alongside the newer things I've added to my library through the subscription service is a big plus. Naturally, you can save any music or playlists to your device for offline listening.

The question is whether Apple Music is any better than the many other music apps already on Android.

Apple Music for Android is nearly feature-complete when compared to the iOS version -- right now, it seems like the biggest missing feature is music video support, something Apple says will come soon. While the app is well designed and contains the service's most important features, its beta nature does show up in the form of occasional app crashes if you start pushing your way through the UI too fast or too erratically. That's the only real problem I've encountered thus far; playing music appeared seamless either over WiFi or Verizon's network.

The question remains whether or not Android users have any real reason to buy into Apple's music service -- all the major players are available on the platform, and each has its own strengths and weaknesses. If you're someone who built up a big collection in iTunes and wants to take advantage of that music on Android, Apple Music would be a smart choice. And its curated playlists remain a unique differentiator and a truly fun way to find new music. Fortunately, Apple is still giving new users a lengthy three-month trial, so if you're an Android user who hasn't given Apple Music a shot, now's the time to find out if it'll work for you.

In this article: apple, applemusic, applemusicnandroid, hands-on, musicapps, musicstreaming
All products recommended by Engadget are selected by our editorial team, independent of our parent company. Some of our stories include affiliate links. If you buy something through one of these links, we may earn an affiliate commission.