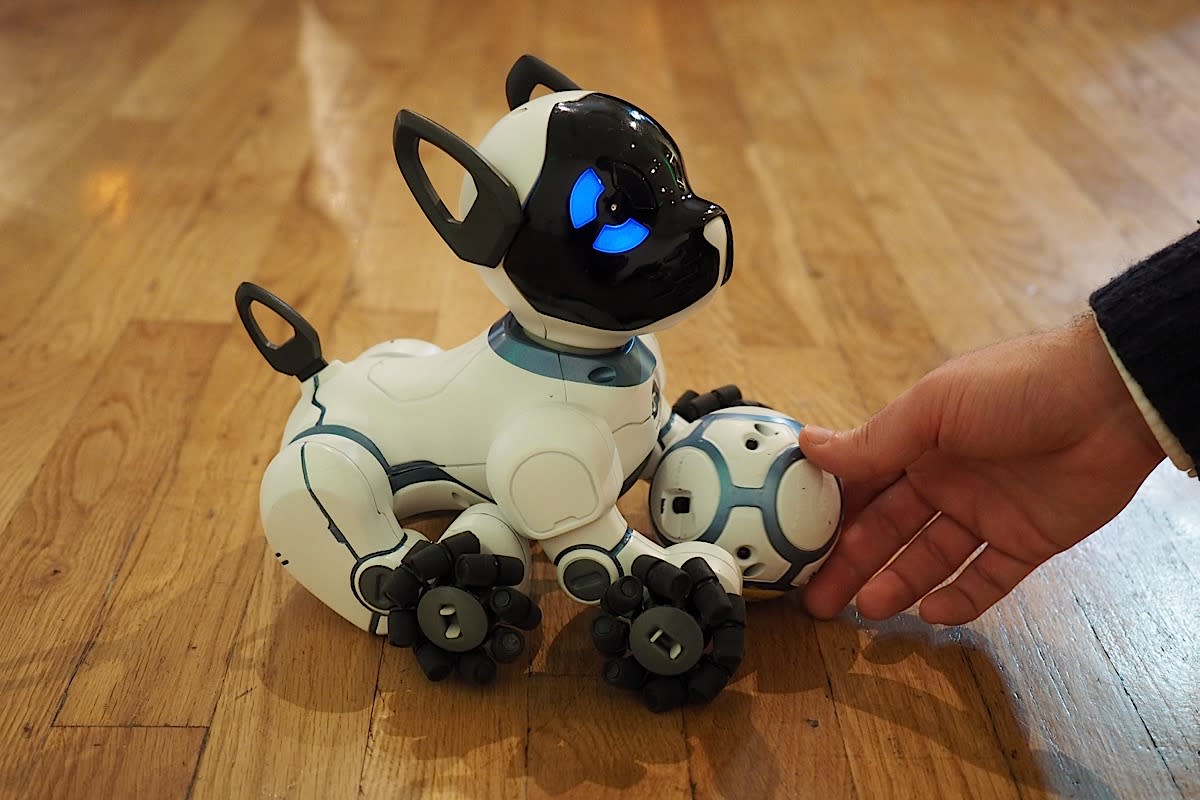 WowWee, a smart toy company, has unveiled a robotic dog with blue-green LED eyes. The dog, aptly called CHiP (short for Canine Home Intelligent Pet), sits with the tap of a button, picks up your presence in the room via bluetooth and plays fetch. The sensor-loaded pup comes with a toy-watch looking wristband that allows it to pick up your whereabouts. When you're happy with your "pet's" response, you can press down a thumbs up on the wristband as a sign of approval -- it's the digital equivalent of a belly rub. CHiP rolled around on the floor with a whirring sound on its peculiar looking wheels. The wheels give it flexibility to move in any direction -- it charged forward and quickly slid to the side with a quick tap on an iPad app. Mid-demo, as a child snuck up close to the black and white mechanical dog, it sprawled its legs and waited as the child pet its head. While I wasn't particularly excited at the sight of big, bright blue eyes flashing back at me, it didn't seem to matter to the child who continued to interact with the robot for a few seconds while it stayed still.

When Davin Sufer, CTO of WowWee, pressed down a button on his wristband, the dog turned to move in his direction. Sufer was quick to point out that the pet is far from ready yet. It will ship next fall after it's loaded with touch sensors and many more animated responses for pet-owner interactivity. For now, as CHiP continued to wheel around, it was a fascinating but unsettling glimpse into the world of at-home robots that are underway. Between talking dolls and robotic dogs, it seems inevitable that the future of play time will be WiFi-dependent.

In this article: CES2016, CESNY, CesUnveiled, CHiP, gear, RoboticDog, robots, SmartToy, timeline16robopetfriend
All products recommended by Engadget are selected by our editorial team, independent of our parent company. Some of our stories include affiliate links. If you buy something through one of these links, we may earn an affiliate commission.