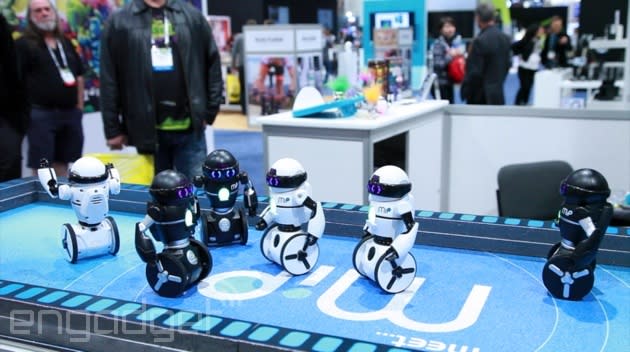 You might remember the MiP from such posts as Meet WowWee's MiP: A gesture and app-controlled robot with moves like Jagger and Live from the Engadget CES Stage: WowWee CTO Davin Sufer. Well, if you happened to catch the latter of those two, you might also remember that the demo gremlins made a bit of an appearance while Davin Sufer was on stage. So, we followed the company's CTO back to the WowWee booth where he promised a special treat, and boy did he deliver. Turns out you can control more than one MiP from a single phone. So he connected to six of his little bots, picked out a song from his library and started the charismatic little buggers on an epic synchronized dance. We don't want to bore you by repeating the details we already offered in our previous hands-on, just enjoy the video below.


Edgar Alvarez contributed to this report.
In this article: ces2014, hands-on, mip, toys, video, wowwee
All products recommended by Engadget are selected by our editorial team, independent of our parent company. Some of our stories include affiliate links. If you buy something through one of these links, we may earn an affiliate commission.