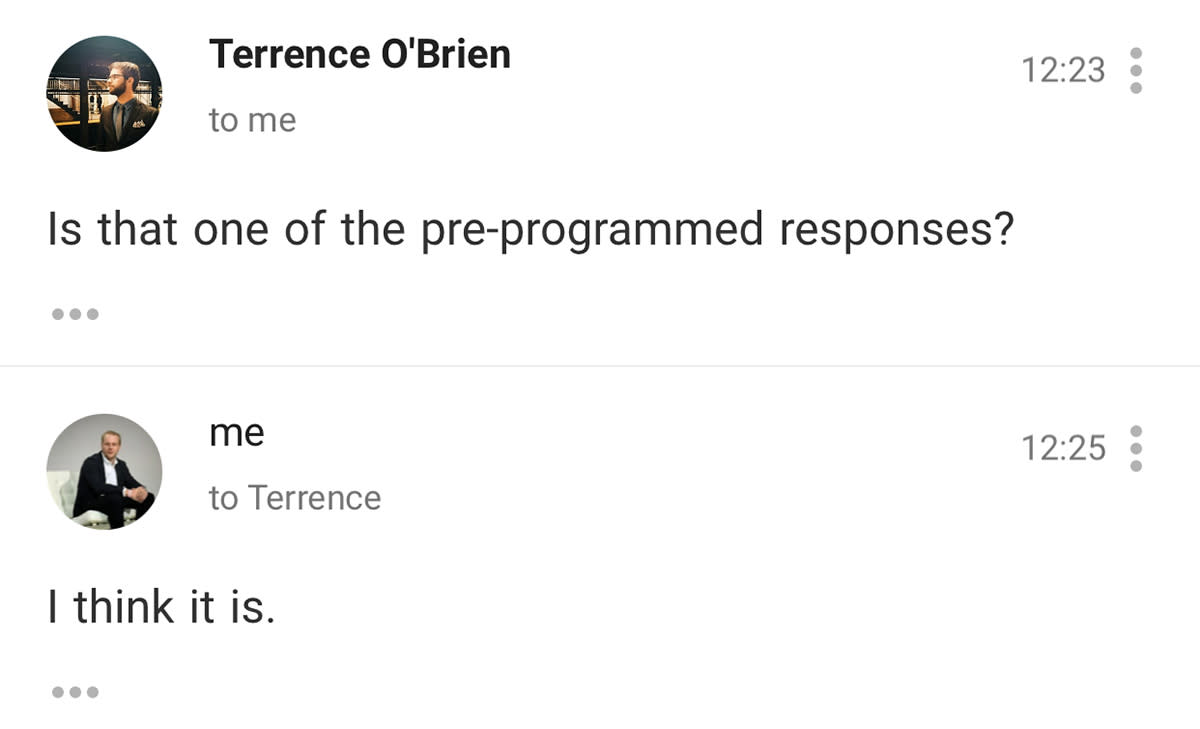 Google's Inbox is like an experimental Gmail, offering a more active (or laborious) way of tackling your inbox bloat, delaying and reminding you to respond at a later time. Its latest trick involves harnessing deep neural networks to offer a trio of (short!) auto-responses to your emails -- no typing necessary. Does it do the trick? Can a robot truly express what I need it to, or at least a close enough approximation that I'm satisfied with? I tried it this week to find out.

Some caveats: over half of my work and private email comes in Japanese. And while Google is working on rolling out other language support, it doesn't quite know what to do with kanji just yet. Also, a lot of my digital interactions are done outside of email these days. If it's not Facebook, it's WhatsApp or Line.

That said, Inbox's new feature saved me typing out plenty of responses -- and the suggestions were often completely on point. Autoreply works best when the response can be simple: "Yes, I did that thing you asked", "No I'm not available Tuesday night." Yep, "Sounds good" and "Yesterday" may not be the most scintillating of email correspondence, but it gets the point across. And with some luck the responses often hit the appropriate level of enthusiasm too. I'm used to these kinds of automated responses -- they're similar to what the Apple Watch throws up in the ways of automated text responses. They also remind me SwiftKey, albeit in the most on-the-rails way possible. While Swiftkey doesn't read into the context of your email thread (yet?), it does know how you compose your messages. When I tell my friends I'm not going out tonight, mid-response, the custom keyboard (bless it) knows I'm going to ask their plans for the weekend.

The biggest problem I have is how terse the replies can often be. As one colleague responded after I explained my brief response: "Google is rude." Maybe it's my intrinsic Britishness, but nearly all my emails start with a "hi", "hey", "Morning". Without them, I feel like an aggressive tool. Google already knows that there's some things that the we humans prefer to write ourselves:

"Our early prototype was its propensity to respond with "I love you" to seemingly anything. As adorable as this sounds, it wasn't really what we were hoping for."

It turns out that most of us aren't huge fans of letting an automated response system tell our friends colleagues, or Amazon that we love them. (I joke: in my experience, the Autoreply feature is far more likely for shorter email chains. lengthier emails -- with embedded images and links -- rarely offered an automated response.) And that's probably my major takeaway. When I'm offered Autoreplies in the Inbox app, there's a roughly 50 percent chance they hit the mark. If that happens when I'm riding the subway or walking somewhere, the function is truly convenient. Perfect? No. But better than attempting to type one-handed on my iPhone 6S? Oh yes.

In this article: autoreply, email, gmail, google, inbox, neuralnetworks
All products recommended by Engadget are selected by our editorial team, independent of our parent company. Some of our stories include affiliate links. If you buy something through one of these links, we may earn an affiliate commission.