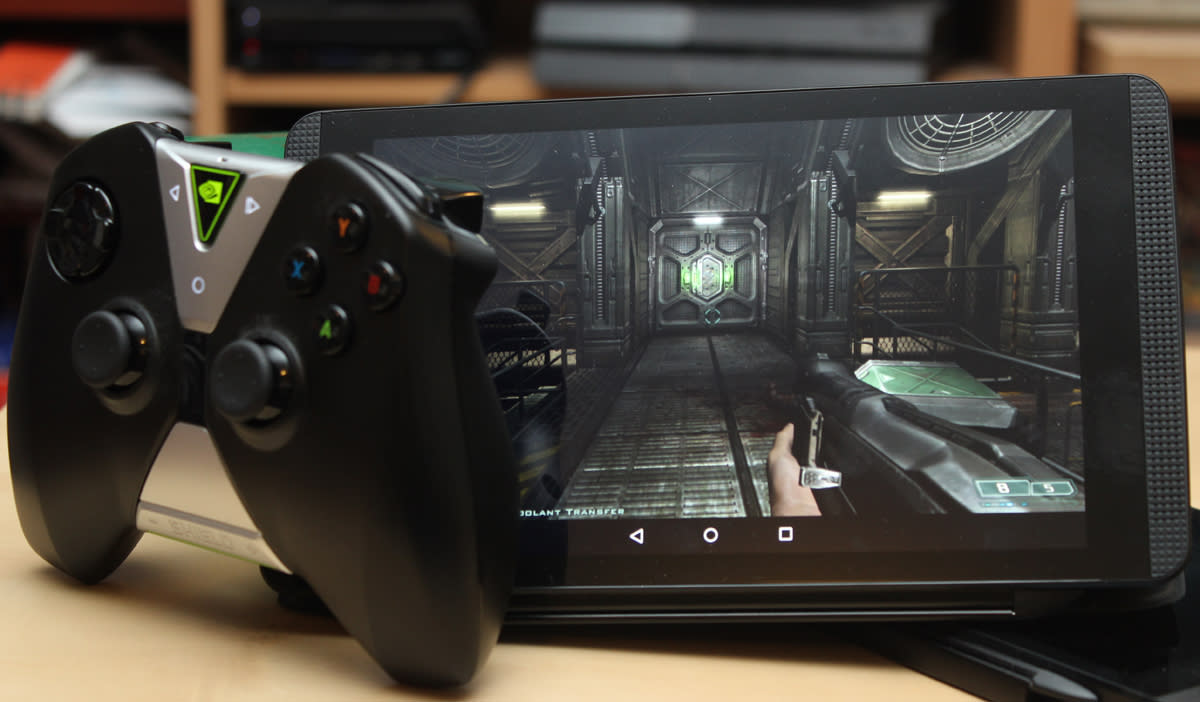 NVIDIA's first Shield tablet was a device that got almost everything right: The 8-inch slate had a crisp display flanked by twin speakers, a surprisingly precise built-in stylus and a powerful 192-core Kepler K1 processor. At the time, it was easily the best Android gaming device on the market, and a pretty darn good media tablet to boot -- but NVIDIA quietly put the Shield to pasture earlier this year. Is the company preparing to launch a new, more powerful Shield tablet? Nope: It's putting the same slate back on the market, albeit with a lower, $199 price tag and fewer bells and whistles.

At a glance, the new NVIDIA Shield Tablet K1 is a dead ringer for its $299 predecessor, featuring a nearly identical chassis with the same ports, buttons and camera layout. There have been a few tweaks: NVIDIA replaced the glossy black lettering on the shield logo with brushed metal characters and the new tablet's speakers are covered with rubberized grip surface. In fact, the only real difference between the old Shield tablet and the new is what's missing. When you open the box for the NVIDIA Shield Tablet K1, you're presented with just the tablet and nothing else. No charger, no microUSB cable and no built-in stylus. NVIDIA told us the exclusions were part of the company's efforts to cut costs: most consumers already have a tablet or phone charger lying around the house. Leaving it out of the K1's box allows them to slash a few dollars from the total price. It's not a bad move, but it could catch a few unsuspecting consumers off guard. What about the Stylus? NVIDIA says the new tablet is still compatible with the ShieldDirect Stylus 2, but it's now only available as an accessory. I spent some time with the K1 and confirmed, it works exactly as it does on the original tablet -- but there's no longer a slot in the Shield's chassis to hold the pen.

Folks who already own a Shield tablet don't have any reason to upgrade to the K1, but new buyers may want to take a look. It's more than just a gaming device, it's a competitive tablet in its own right -- and still lives up to every word we wrote about the original last year. Well, almost every word: the K1 is available only in a single configuration: a WiFi model with 16GB of internal storage (expandable to 128GB via MicroSD). If you need a slate with LTE, look elsewhere.

In this article: gaming, hands-on, handson, mobilepostcross, nvidia, nvidiashield, nviida, shield, tablet, videogames
All products recommended by Engadget are selected by our editorial team, independent of our parent company. Some of our stories include affiliate links. If you buy something through one of these links, we may earn an affiliate commission.