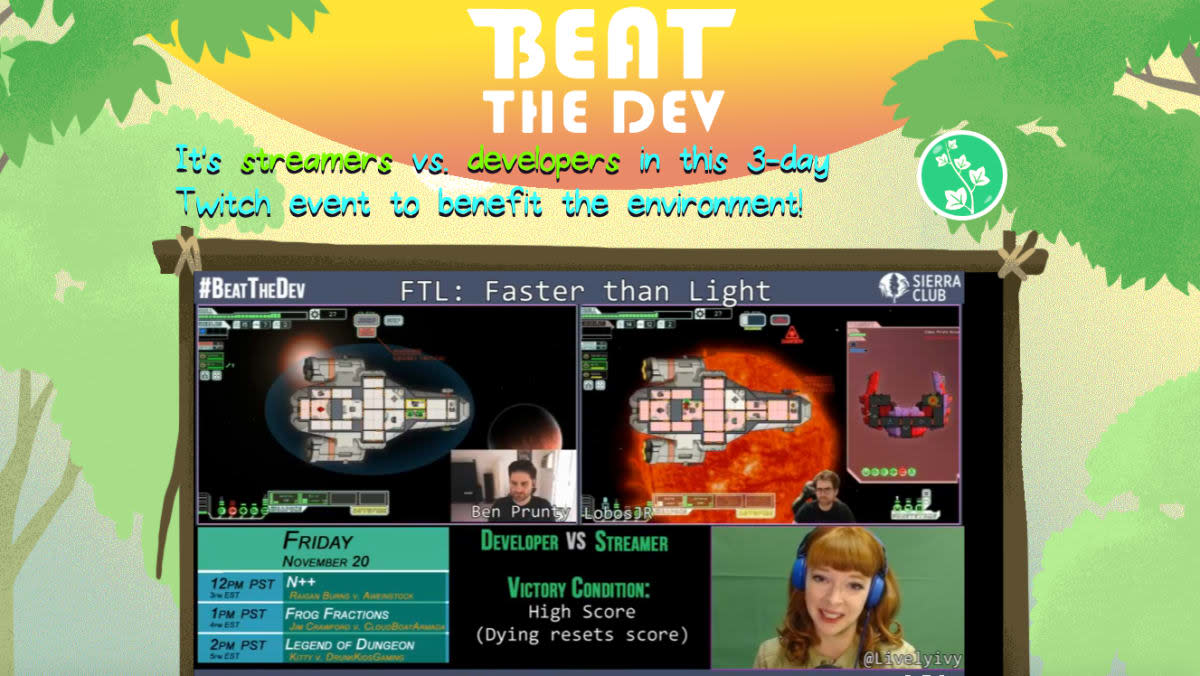 Erin Robinson Swink, developer of the hand-painted space-physics game, Gravity Ghost, has a simple reason driving her passion for green energy and environmental advocacy: asthma. "I remember how awful it was needing an inhaler as a kid," she says. Air pollution -- driven in large part by burning coal -- contributed to her respiratory disease.

Today, Robinson Swink is combining her love of game development and clean energy for a three-day event called Beat the Dev on Twitch. The show is live now, and it promises to feature developers behind Borderlands 2, Uncharted 3, Super Meat Boy, Octodad, Nuclear Throne, Journey, Darksiders II and 17 others playing their own games against a lineup of live-streamers. Donations made during the event will benefit The Sierra Club and its clean-air, green-energy advocacy efforts.

Beat the Dev takes its inspiration from other charity streams, such as Indie Games for Good, TheSpeedGamers and, most notably, Awesome Games Done Quick.

"I'm a huge fan of Games Done Quick, and have watched at least part of every event since I first learned about them," Robinson Swink says. "I was aware of speedrunning as a concept, but I had never seen it done as this kind of 'performance art' before." Beat the Dev will feature two speedrunners, TOSAgvirus playing Axiom Verge and RockLeeSmile playing Super Meat Boy.

Robinson Swink wanted to put together an event benefiting the environment ahead of the annual United Nations Conference on Climate Change in Paris starting November 30th. She initially thought of hosting streams where developers play their own games and answer questions, "but that sounded a little dry and academic," she says. "My husband, Steve, suggested we show people trying to beat game developers at their own games. I naturally thought of streamers because they're professionals at making game-playing look awesome. So the idea was a team effort." Robinson Swink is entrenched in the game-making industry and she knows a lot of other developers -- but she was still nervous to talk with a few people on her Beat the Dev wish list.

"I listed out all the people I wanted to ask, from those who are close friends, to developers I was almost too shy to approach," she says. "Then I wrote to everyone individually and told them my ideas for the stream. Even those who were too busy lent their support, which encouraged me to keep going."

She ended up with 24 games, which means she's coordinating about 50 people for this weekend's event. "I suppose I could have chosen a smaller number for my first benefit stream, but so many cool people kept saying yes," she says.

This is all you need to know about #BeatTheDev pic.twitter.com/FYUUAlLCcF

Robinson Swink isn't stopping with a lineup of high-profile game developers and streamers -- she also plans on spicing up the show with an array of festive, ridiculous hats. "Whenever we reach a funding milestone, I'm going to switch to a sillier hat," she explains. "I hope people's curiosity about just how silly these hats get is enough to drive some significant fundraising."

Whether it's for the hats, the developers, the streamers or The Sierra Club, you can watch Beat the Dev all weekend live via Twitch.

In this article: BeattheDev, Borderlands2, charity, ClimateChange, environment, ErinRobinsonSwink, FTL, GravityGhost, hdpostcross, interview, IvyGames, nuclearthrone, streaming, SuperMeatBoy, TheSierraClub, twitch, Uncharted3
All products recommended by Engadget are selected by our editorial team, independent of our parent company. Some of our stories include affiliate links. If you buy something through one of these links, we may earn an affiliate commission.