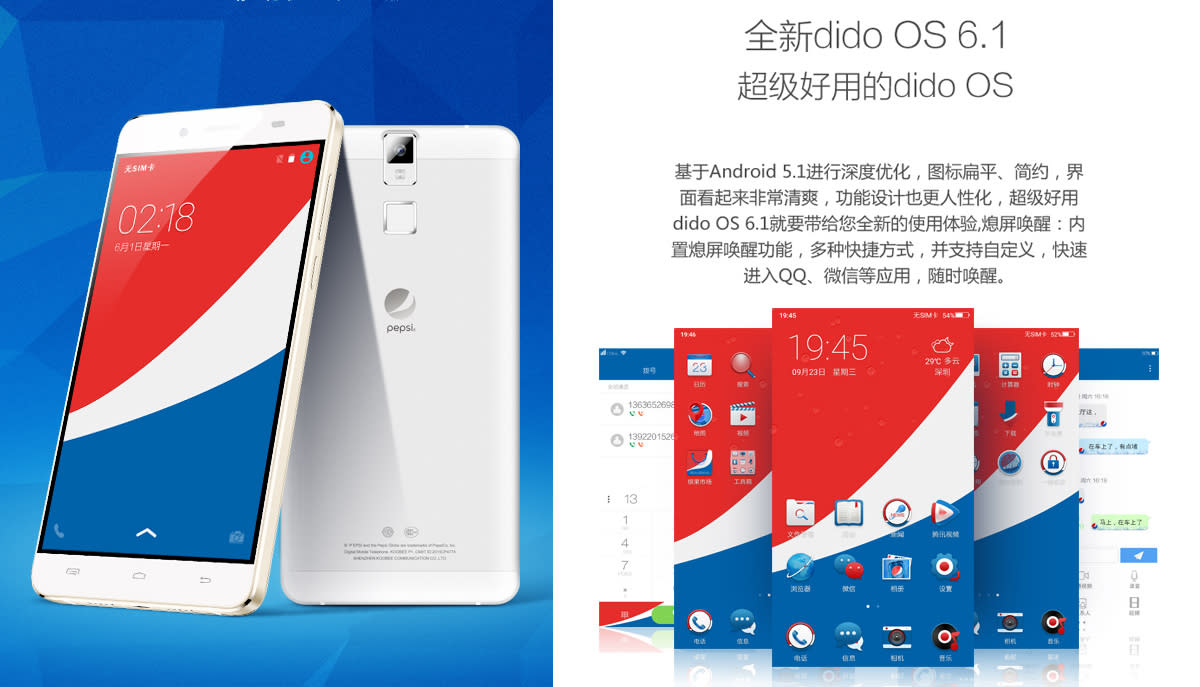 We don't exactly know why, but China seems to have a thing for the Pepsi brand. Following the Pepsi edition Oppo N1, another company from the Far East is launching a new device that's simply dubbed the Pepsi Phone. From afar, you may mistake this aluminum device as a rebadged Oppo R7 Plus, but it's actually a variant of the $250 Koobee H7 featuring the same 5.5-inch 1080p display (maybe IPS LCD?) with 2.5D glass, MediaTek MT6592 1.7GHz octa-core processor, 16GB internal storage, 2GB RAM and backside touch fingerprint sensor -- it's likely an older version, though, judging by its thick metallic border like the one on the Huawei Mate 7. It also runs on Koobee's customized Android 5.1 with a Pepsi theme out of the box.

The remaining parts of the Pepsi Phone are also identical to the H7: 13-megapixel f/2.0 camera (Samsung sensor with less-than-ideal 1.12μm pixels), 5-megapixel front camera, 3,000 mAh battery, dual SIM slots and microSD expansion (which takes up the secondary SIM slot; supports cards of up to 64GB). Not bad for a smartphone with a 7.7mm thickness and 158g weight. As for colors, you can pick either blue (which doesn't look that good, in our opinion), gold or silver.

Koobee's Pepsi Phone crowdfunding campaign offers two flavors: the P1 with just TD-LTE and TD-SCDMA radios for China Mobile, and the P1s with the additional FDD-LTE plus WCDMA radios for China Unicom and the rest of the world. Alas, the P1's limited batch of 1,000 units quickly ran out, which isn't surprising given the dirt cheap $78 price tag. As for the more advanced P1s, folks in China can still grab one with the $110 early bird offer before you're left with the $156 option, or $203 if you want a selfie stick as well. The campaign has until December 3rd to reach its $469,700 goal which, judging by its current 37 percent completion, may suggest that the remaining offers aren't as sweet as the actual carbonated soft drink.

In this article: android, china, crowdfunding, didoos, jd, koobee, mobilepostcross, p1, p1s, pepsi, pepsip1, pepsip1s, pepsiphone, phone, smartphone
All products recommended by Engadget are selected by our editorial team, independent of our parent company. Some of our stories include affiliate links. If you buy something through one of these links, we may earn an affiliate commission.