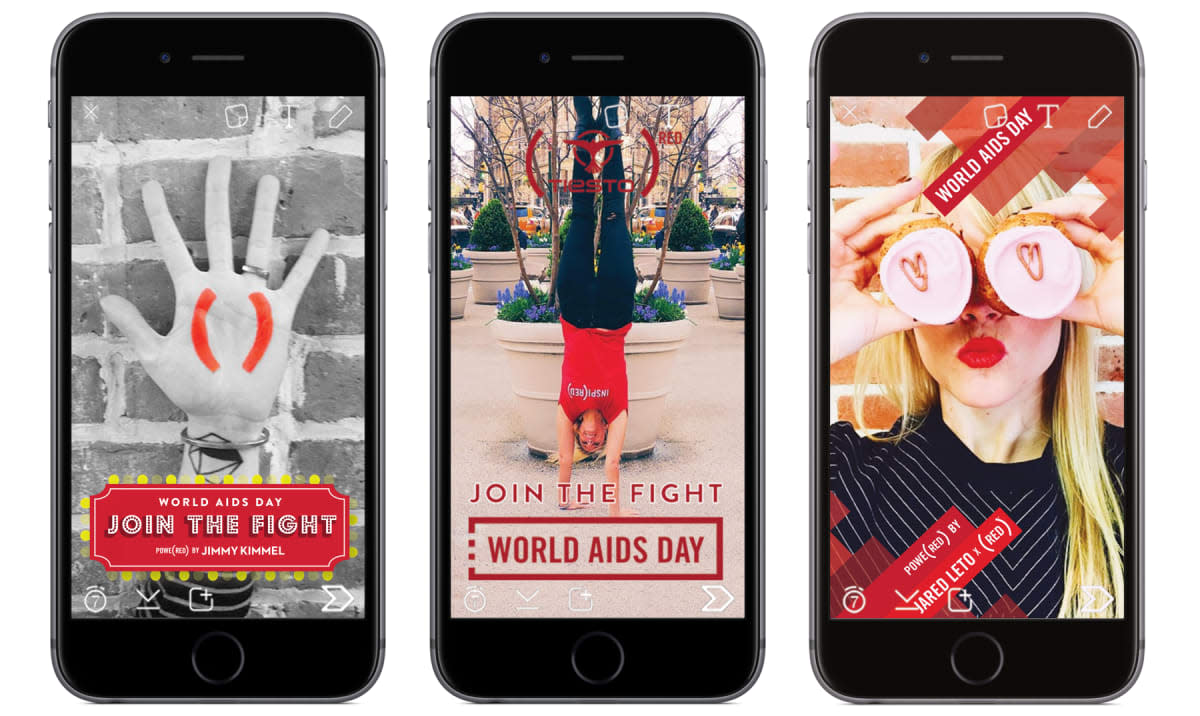 Tomorrow is World AIDS Day, and as such the non-profit (RED) organization has plenty of activities planned to raise both money and awareness for its fight against the disease. If you're a Snapchat user, you can do your part just by adding a filter to your snaps: according to the LA Times, the Bill and Melinda Gates Foundation will donate $3 to (RED) every time a Snap is posted that uses one of three custom "World AIDS Day" filters up to a grand total of $3 million.

It's the first time Snapchat has partnered with (RED) and it's also the first major philanthropic campaign the company has undertaken. But it's common for (RED) to partner with digital services in addition to the (RED) products it offers -- last year, the organization partnered with the Apple's App Store, and it has also worked with Twitter, Vine and Foursquare in the past.

While the Gates Foundation is capping its donations at $3 million, the group says that it'll also donate $3 every time a (RED) YouTube video starring Jimmy Kimmel, Scarlet Johansson and Barry Manilow is shared, with those donations capping out at an additional $1 million. The three filters will be available to Snapchat users starting at midnight in their local time zone and will be active for 24 hours -- given the service's popularity, it's likely that users will max out the $3 million Snapchat donations pretty quickly.

If you want to put money rather than just snaps towards World AIDS Day, the (RED) foundation and Vice are hosting a "Shopathon," part of which gives you the opportunity to win a chance to hang out with celebrities like Bono, Kim Kardashian, Matt Damon, Snoop Dogg, Jimmy Kimmel and many more. And for you Game of Thrones fans, you can donate to (RED) and win a chance to visit the show's set and sit on the iron throne itself.

In this article: gear, mobile, red, services, snapchat, worldaidsday
All products recommended by Engadget are selected by our editorial team, independent of our parent company. Some of our stories include affiliate links. If you buy something through one of these links, we may earn an affiliate commission.