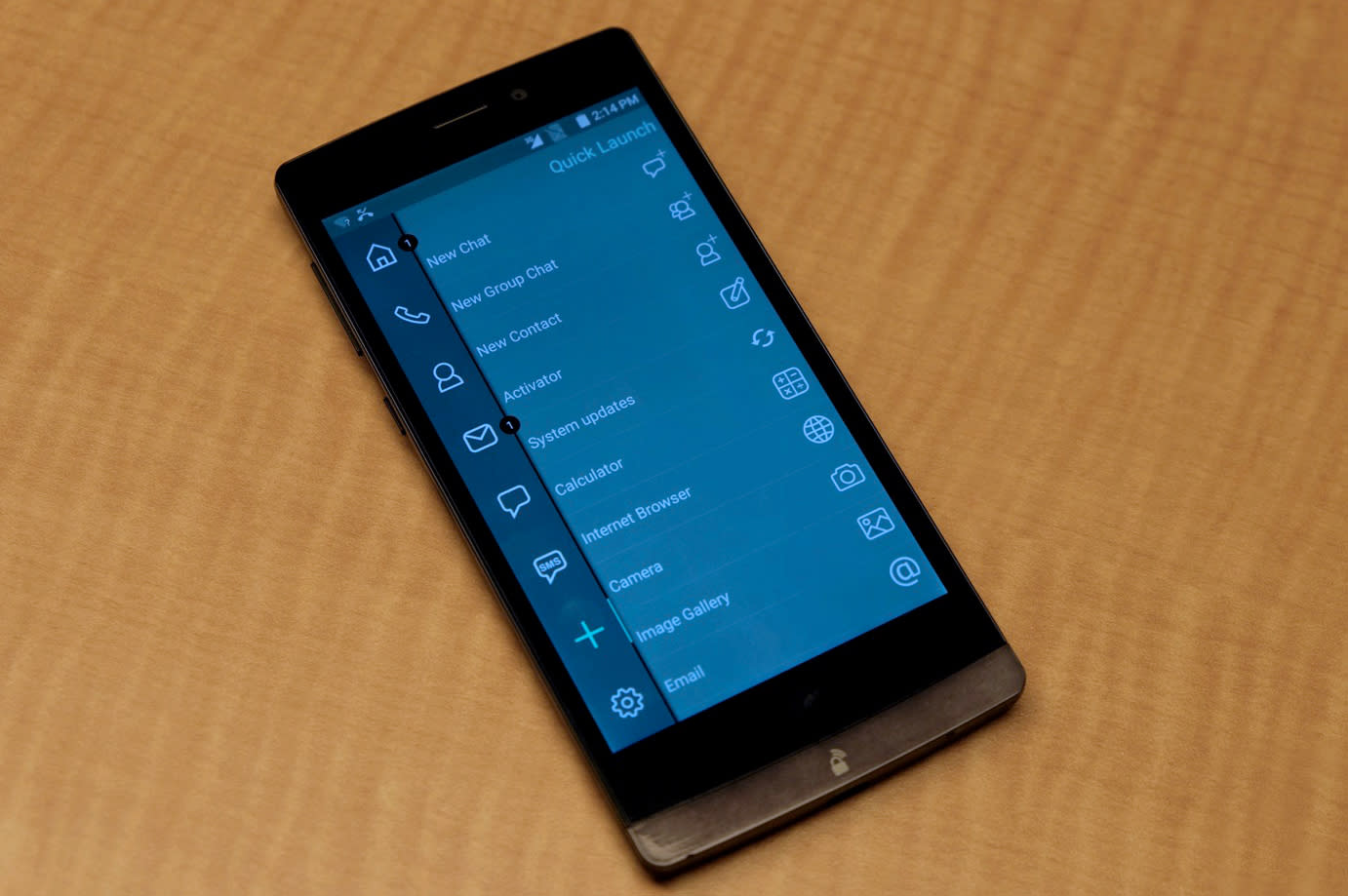 It doesn't even have apps.

Let's get this out of the way right up top: Sikur's GranitePhone is not for you. Security as a feature is nothing new -- BlackBerry's entire existence rests upon it at this point -- but the GranitePhone takes security to another level. While the phone is based on Android, it runs a forked version called GraniteOS that is startling in its simplicity. You can make secure, encrypted voice calls and use Sikur's encrypted chat and messaging service. There's also support for standard GSM calls and SMS messages, and you can take photos or add standard Exchange, POP or IMAP email accounts. But that's it.

There's no app store or even many built-in apps for things we think of as standard smartphone features, and that's all with intention. This isn't a phone for the standard smartphone user, says Sikur CEO Fred D'Avila -- instead, his company built a phone in partnership with hardware manufacturer Archos specifically for governments, big enterprise clients and financial institutions. The challenge will be convincing those potential clients to go with Sikur and the GranitePhone over its better-known competitors.

In keeping with its target markets, the GranitePhone hardware itself is a very standard, unassuming, even boring device with little to set it apart from the rest of the crowded Android field. It's a 5-inch device with a 1080p screen, a Qualcomm Snapdragon 615 processor, 2GB of RAM and 16 GB of internal, non-expandable storage. It has a 16-megapixel back camera and 8-megapixel front facing camera and a 2,700mAh battery that you can't replace. The GranitePhone was developed out of a desire to give those customers already using Sikur's platform on the desktop for calling (both voice and video), messaging and file transfer a way to take that data to their phones and not give up any security. And so far, the company has a fair slate of clients, including seven governments around the world (Brazil, Sikur's original home country, is one of those). But despite that focus on large, privacy-focused organizations, D'Avila said that about 15 percent of the orders for the GranitePhone thus far have come from individuals, not corporations or governments.

15 percent of GranitePhone orders are from normal consumers, not businesses or governments.

As to why potential customers should choose Sikur's solution over competitive products focused on security, like the BlackBerry platform, Samsung's Knox security platform for Android, or even the similar, encryption-focused BlackPhone, it's a little less clear. Sikur does take the step of installing on-site data servers at a client's request, so that all of the data going to and from the GranitePhone is stored locally, something D'Avila says neither BlackBerry nor BlackPhone users can get.

Sikur also offers its platform and capabilities across the desktop, making it easier to access your secure communications when you're using a computer. He also notes that by creating its own OS and device, Sikur is able to "control the endpoint -- not only the communication but the whole device." Whether that's enough for customers to choose a relatively small, unknown company (at least compared to BlackBerry and Samsung) remains to be seen.

Sikur does seem to be aware that it'll eventually need to offer an experience that has more in common with typical smartphones to individual users, at least while still offering the encryption that is at the forefront of the product. "The natural evolution for us is going to be going to applications stores," D'Avila says."I''m not going to say that we're going to do our own, but we do want to let customers install approved applications one way or another." Sikur also wants to add secure video calling to the GranitePhone, something it already offers in its desktop product. While Sikur will keep updating its GraniteOS, this Archos-built hardware seems like it'll be the only way to get a GranitePhone for the foreseeable future. "We're not working on bringing new devices out in a typical consumer timeframe," D'Avilia says. "We don't expect our customers to be changing hardware in less than two years." That said, he also indicated the company was actively exploring other hardware partners beyond Archos, so it's conceivable that Sikur will eventually offer a small lineup of different phones.

For now, though, there's just one phone that can only do a handful of basic features -- so it had better do them well. In the few minutes we got to spend with the GranitePhone we couldn't properly evaluate how well it worked (or how secure it really is), but we're hoping to get our hands on one for more extensive testing soon. For now, if you want to get a taste of Sikur's services for free, you can download the company's app for iOS and Android and try its secure messaging service, or give the full suite of desktop products a spin for 30 days. No, you won't be able to run Spotify or Candy Crush on this phone -- but if you want all your communication to be encrypted, the GranitePhone might be worth a look.