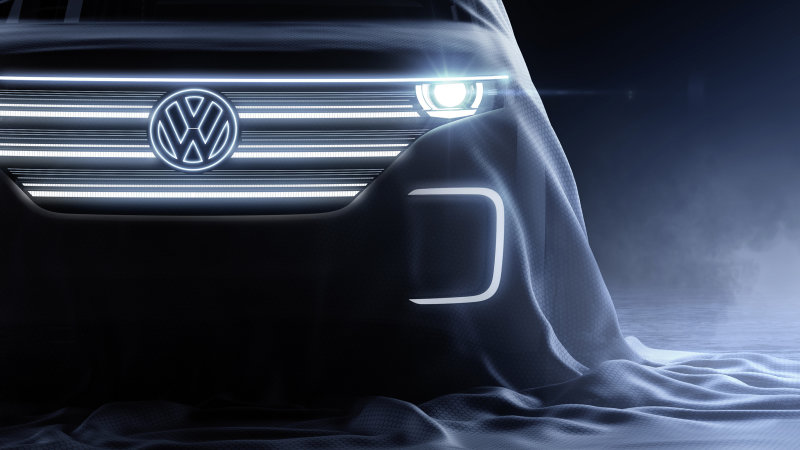 Volkswagen reportedly plans to revive the Microbus's classic look for an EV concept at the 2016 Consumer Electronics Show, but the first teaser for the vehicle suggests a more futuristic design with an illuminated grille and squinting headlights. Rumors hint that the full shape includes some vintage cues from the van, including short overhangs, a wide D-pillar, and boxy overall aesthetic.

VW wants to use this concept as a way to point the way toward its future and probably encourage CES visitors to forget a little about the company's present. The brand's chairman will debut the EV during his CES keynote on January 5 where he will focus on "the latest developments in electromobility as well as the next generation of connectivity."

VW has teased an electrified revival of its classic van before. The Bulli concept at the 2011 Geneva Motor Show mixed modern tech with the vintage look and made mouths water. Maybe the company can actually get the vehicle into production this time.
Show full PR text
Volkswagen at the CES 2016: the focus is on networking and long-distance electromobility

The starting shot for the Volkswagen brand's future initiative

In 2016 Volkswagen is once again represented at the Consumer Electronics Show, CES, which takes place from 6 - 9 January in Las Vegas/USA. Dr Herbert Diess, Chairman of the Volkswagen Passenger Cars brand, will be holding the keynote on the evening before the show opens its doors. The main focus of his speech is on the latest developments in electromobility as well as the next generation of connectivity.

Volkswagen will present a completely new concept car at the CES, to illustrate the major changes that the car is set to go through in the next few years. First and foremost the world premiere marks the beginning of a new era of affordable long-distance electromobility. Over and above this, innovative features will demonstrate the benefits to the customer that Volkswagen will be able to deliver in the near future thanks to the increasing interconnectedness of the motor car. As well as that, new display and operating concepts will also be making their debut in Las Vegas. For instance, Volkswagen will give quite a clear glimpse of the latest developments in in-car infotainment that are on the verge of being launched onto the market. This will see innovations such as the Golf R Touch concept car finding their way into Volkswagen's broad product portfolio.

The CES has long been considered a reliable barometer of the key trends in digitalisation and consumer electronics. The latest products and services are presented to over 150,000 trade visitors every January.
All products recommended by Engadget are selected by our editorial team, independent of our parent company. Some of our stories include affiliate links. If you buy something through one of these links, we may earn an affiliate commission.