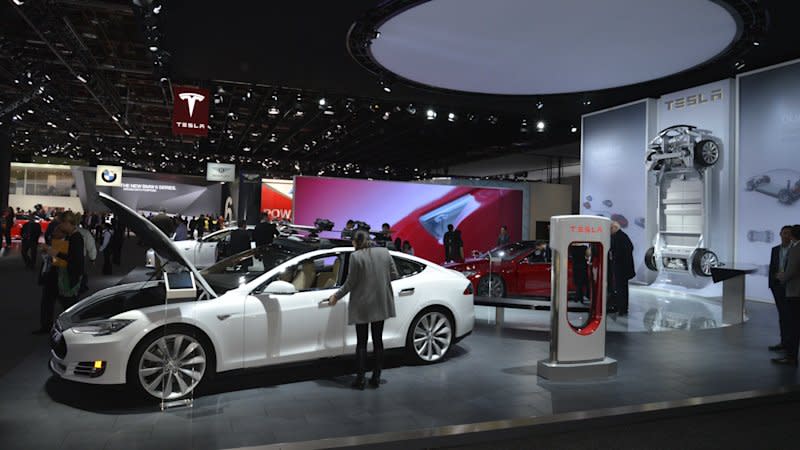 All eyes continue to be on how quickly the Tesla Model S has been accepted by consumers, beating the expectations of critics who said it was too expensive and that the EV range would always be a hinderance in places other than California. But among other electric vehicles, how do its sales stack up?

According to Hybrid Cars, the Model S will pass the 100,000-sales mark in December and be this year's top-selling plug-in vehicle. Consider that this large luxury sedan that just happens to be electric typically sells for north of the $100,000 mark. And consider, as they do, that about 60 percent or so have gone to American buyers and that means roughly 60,000 US buyers have picked up a Model S - that beats the sales of other large gas-powered luxury sedans. Tesla does not officially release monthly sales figures.

Despite the excellent year-to-date numbers, the Model S still hasn't caught up to the other big names among electrics, the Chevrolet Volt and Nissan Leaf. And it's estimated that if you factor in the first-generation Volt and its Opel, Vauxhall, and Holden derivatives, General Motors has sold just over 100,000 of its range-extender EV since it first went on sale in December 2010. Sales have been off significantly this year, mostly due to production stopping in spring to retool for the 2016 Volt that recently went on sale in some states.

But since the Nissan Leaf went on sale around the same time as the Volt, it's maker has managed to move almost twice as many, or about 200,000 cars globally. This, even as the Leaf's US sales were off more than 40 percent through November. Blame that on the Leaf's age, the 2016 model's noticeably longer range and that used Leafs are dirt cheap these days.

The bottom line is that while the Tesla Model S has been a hit as far as electric vehicles are concerned, it hasn't caught up to the popularity of the Nissan Leaf yet. And with a second-generation Leaf due in the near future and the Tesla Model X possibly affecting Model S popularity, it's too soon to see where that car's momentum will stop.