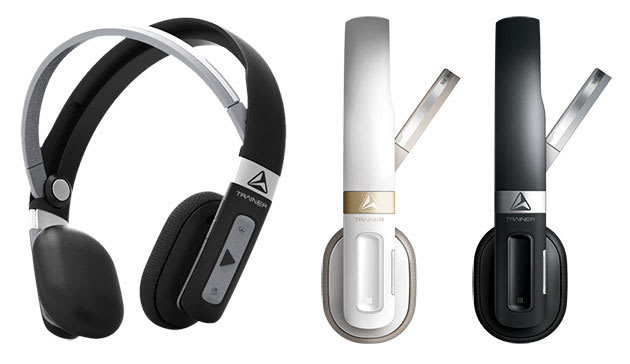 Gibson, a company best known for its guitars, is diving into fitness audio, and it's tapped an Olympic gold medalist to lend a hand. That's right, the company's Trainer headphones were designed with the help of the world's fastest man: Usain Bolt. If you'll recall, Bolt has endorsed products from Soul in the past, but "Gibson understands how to harness the power of music and Trainer will help anybody who cares about fitness reach their potential," he says.

Not only does the audio accessory handle the listening duties, but it also has LEDs for added safety during a nighttime run. A second headband, something Gibson is calling an Aeroflex design, snaps into place to keep the headphones from moving around during a workout. The pads that rest on your ears can be removed and washed, and despite that feature, silicon seals the internals to keep them dry when you're all sweaty and gross. Cord tangles won't be an issue either, as Trainer connects via Bluetooth and claims 10 hours of playback before needing to recharge. The headphones also appear to have onboard controls of some sort, but Gibson didn't mention those in the announcement, so we'll seek to clarify that once we get a closer look. While our chance to try 'em out should come this week, you'll need to wait until late April to grab a pair, at which point they'll go for for $239.

Source: Gibson
In this article: audio, ces, ces2015, fitness, gibson, headphones, running, usainbolt
All products recommended by Engadget are selected by our editorial team, independent of our parent company. Some of our stories include affiliate links. If you buy something through one of these links, we may earn an affiliate commission.