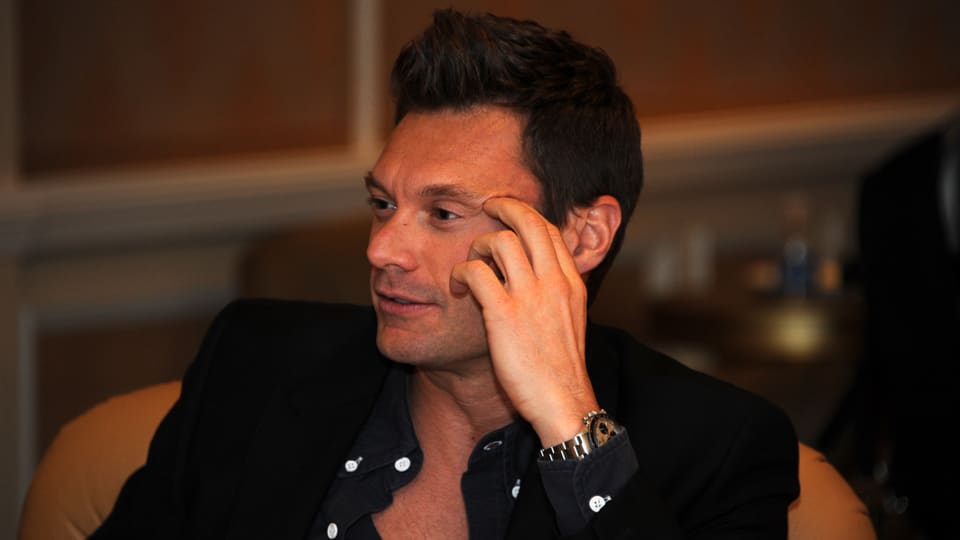 Maybe you remember the bizarre collision of worlds at last year's CES when Ryan Seacrest touched down in Las Vegas to introduce the Typo, a physical QWERTY keyboard case for the iPhone 5/5s. If you do, then you may also recall the controversy and legal tussling over the original Typo's striking resemblance to BlackBerry's Q10 keyboard. One court ordered a sales injunction and another Typo revision later, Seacrest and his partner Laurence Hallier are back at CES to debut another physical keyboard accessory, this time it's the Typo2 for the iPad Air and iPad mini lines. The pair carved out some time during the madness of CES to speak to me about Typo's bumpy start, the impact of customer feedback on product design and the boldfaced names that swear by their QWERTY case.

So you guys debuted the first Typo at CES 2014. I have to ask, "Why not just use your BlackBerry? Why did you make the Typo?"

Ryan Seacrest: Well, we made the Typo because we had a couple of devices sitting on the table for many, many dinners. Laurence and I are good friends, and we decided that we wanted to be a little more efficient with ourselves and our lives. And we liked the iPhone, but we couldn't type on it well. So we wanted to create a physical keyboard where we could use our iPhones with speed and with efficiency.

Laurence Hallier: Honestly, we thought it was a hobby.

Were you guys aware prior to the launch that there was a striking resemblance and that it was potentially going to bring legal troubles?

LH: No, we did our homework to find out what was out there, what wasn't out there. And we didn't just do this haphazardly. So we looked at what was out there and we certainly got [outside] opinions and all that. But the lawsuit itself... we can't comment. It's an ongoing thing, but it doesn't affect any of our current products that are out: the Typo2 for iPhone 5, the Typo2 for iPhone 6 and, of course, our iPad keyboard.

LH: I mean, I think that a lot of people are fans of the physical keyboard. BlackBerry was definitely one of the companies in that space. But before that there was the Treo; Motorola made [a physical QWERTY with] the Droid 4...

RS: When I was in elementary school, the Commodore 64. I mean, we typed WITH KEYS on keyboards. Growing up, that's how we did it. And that's what we wanted to create to be able to attach as a case to the iPhone.

How involved are you in the design, Ryan?

LH: The best answer to that is to say that for 12 months, we had prototypes going back and forth, back and forth. We just couldn't get it to a place we wanted it to be. The goal was not to have a product out to market; it was for us to be able to type at the speed that we want to type at accurately. Hence, the "Typo" name. I think Ryan was always our number one tester.

RS: For me, this is my office; this is how I work. I do everything mobile-y because I'm in so many places every single day, every single week. This was a lifesaver for me. This was a game changer for me to be able to have something that I could really type an email out that looks as if it's coming from a computer.

As for the name, it's catchy definitely. Typo is catchy, but it's a bit counterintuitive. Do you have any regrets attaching that name to it... calling it Typo?

RS: Do you know, no one mentions that to me? NO ONE. No one. And I talk to a lot of people. No one says anything to me about the name. They say... when they see it sitting on a table, whether it be in a meeting or at a lunch or something, they see it sitting on the table and they say where they can get that. And you tell them typokeyboards.com. And they never say, "Why's it called Typo?"

In terms of customer feedback, the original Typo wasn't on the market very long due to the injunction. And then the Typo 2 was announced in mid-summer and shipped in September. How much of that feedback was coming in -- was it unsolicited? Were you actively polling them? And what were some of the refinements they suggested, if any?

LH: On our website is info@typokeyboards.com. We read every single email we get in. So we get feedback very quickly. When you develop a product... and I would say our product is very unique in that... 84 percent of our buyers, from the surveys we've done, say they keep it on the phone 24/7. So they give you feedback. They're not shy. And if they have a problem, they let you know. So for us, the feedback is easy. We get a lot of feedback. And listen, this is not the perfect product, nor is any product. But it's as close as we're ever going to get being able to type superfast on a phone. 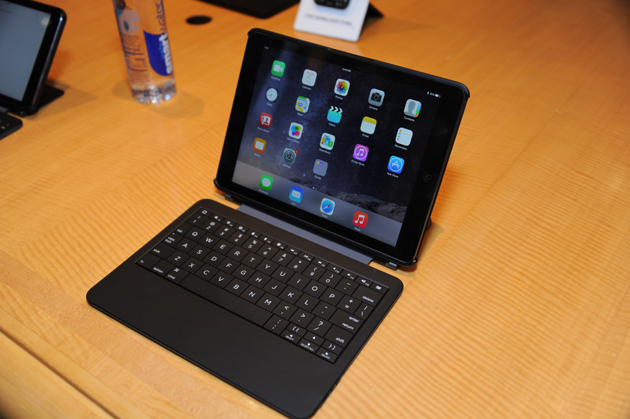 What about products? Was there anything from the customer feedback where they requesting, "I want it specifically for the iPad Air and the mini?"

RS: Yes, for every mobile device from the beginning. We want it for everything.

LH: No doubt. And it's difficult because the Android market is fragmented. So it's very difficult for us. We wanted to bring a product out for Apple. We've now come out with iPad products. We intend to build a keyboard for the Samsung Note line. That'll be out in a few more months.

Starting just with the latest Note or going back?

LH: No. The 4. What's being announced at CES and what's coming out in a few months.
We're gonna look at the Android market... that's probably the number one thing we get by email is, "Do you have one for the iPhone 6 Plus and do you have one for 'blankety blank' Android?"

I'm glad you brought up the 6 Plus. Is it too unwieldy, the size? Is that why you didn't do it?

LH: The core of this business is that if the product is not a lifesaver and if it doesn't work really well for the consumer, we're not going to come out with it. So we prototyped the 6 Plus. We tried it. You know, it's a big phone.

RS: It was hard to perfect it. 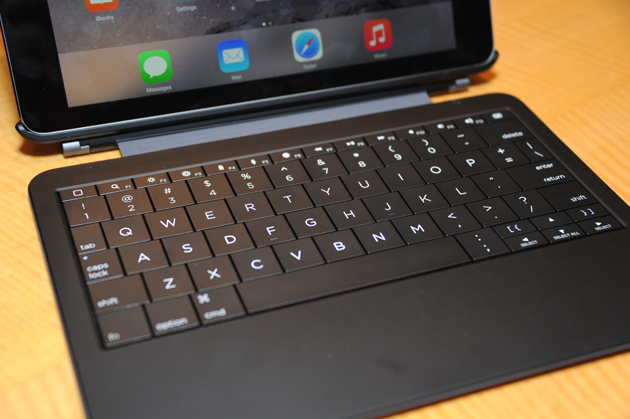 A close-up look at the Typo2 for iPad Air's full QWERTY layout.

How different is the Typo2 case for the iPads here as opposed to the one for the iPhone 6, other than the layout?

LH: We looked at the products out there. We didn't really take any inspiration from this because it's thumb-typing. We really took inspiration from "what does the consumer want that actually wants a keyboard for their iPad?" And there were three basic things that everyone wanted that wasn't being served. Obviously, being as thin as possible, as small as possible. Add no bulk, no weight to the iPad. Detachable was important only because people don't like the single angle. So if you're in Southwest, you've got an angle this much. If you're in first class, you've got a bigger angle. So we really felt this was an integral part of solving this problem of what do you do with an iPad. We're finding so much good feedback on this. People want to buy this [the hinge] on its own. So this hinge actually was developed by the same company that did the MacBook Air. So it's a pretty revolutionary hinge. And we had to re-engineer it to be much, much smaller.

What about wearables? Is Typo just a one-off for you guys? Is there a more of a vested interest in tech? Would you be interested in pursuing something like a tracker?

LH: I think both Ryan and I have the philosophy that unless the product really enhances your life, it's not to our interest. Our business is that we really want to improve people's lives... with the keyboard, we feel we have something to add. ... I just don't think we have much to add to there. ... These are not easy things to do. 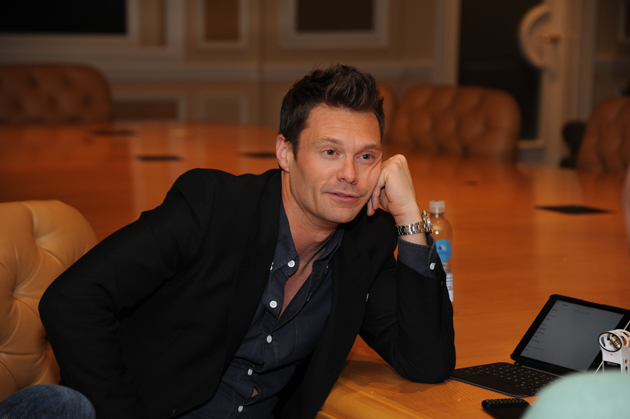 The media mogul and tech entrepreneur Ryan Seacrest talks Typo2.
Last thing I'll ask you guys. I noticed on the site there's a quote from Arianna Huffington... you mention your target user is that prosumer, but do you find that other media personalities and celebrities are adopting the Typo 2 because they were so addicted?

LH: Yes, but they won't let us use their name.

RS: I was at GMA (Good Morning America) three or four mornings ago before New Year's Eve and all Amy Robach could talk about was, "How can I get that Typo2 for my iPhone 6? This is going to change my life." And I've talked to a few [journalists] who have refused to get the iPhone 6 until they can get the Typo 2 to make the jump for the phone.

LH: Arianna was one of them. She emailed me.

RS: I think the whole GMA cast another group too.

LH: We have a ton of celebrities, but they won't let us use their name.

In this article: apple, AriannaHuffington, blackberry, CES, ces2015, galaxynote4, interview, iPadAir2, ipadmini, iphone6, iphone6plus, mobilepostcross, ryan seacrest, RyanSeacrest, Typo, typo 2, Typo2, uk-feature
All products recommended by Engadget are selected by our editorial team, independent of our parent company. Some of our stories include affiliate links. If you buy something through one of these links, we may earn an affiliate commission.