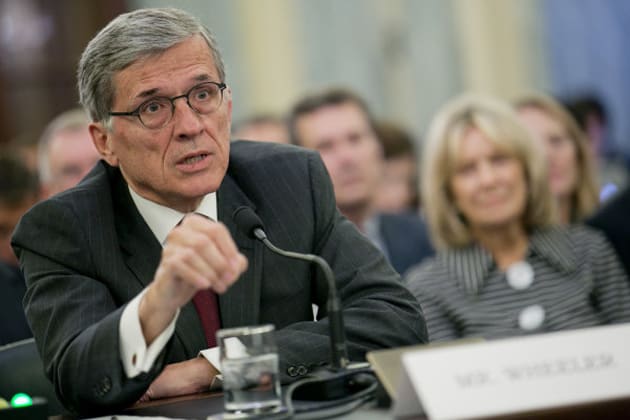 The FCC may be about to redefine American internet access in a big, big way. Chairman Tom Wheeler has narrowed down the Commission's vote on new net neutrality rules to its next meeting, on February 26th. It's still not apparent exactly what those proposed regulations will be, although they're likely to bridge the gap between the President's desire to treat the internet as a utility and the anti-regulatory approach of internet providers. There's a common ground between the FCC and the President, Wheeler says -- they both want to prevent networks from blocking or throttling apps, and they both value transparency.

He's getting a little help from Congress on that front, although the emphasis is on "little." Senator Al Franken has reintroduced a bill that would ban telecoms from charging for prioritized data. Your cable company couldn't offer a service to Netflix or YouTube that lets their video go faster than normal traffic, for example. That wouldn't prevent networks from prioritizing data for free (say, to maintain quality of service), but it'd potentially avoid a two-tier internet where up-and-coming businesses can't afford to reach the public as quickly as incumbents. The gotcha? While well-intentioned, the odds of this measure reaching the President's desk are slim. It's a bill primarily backed by Democrats in a Congress now controlled by Republicans, which have historically fought tooth and nail against net neutrality.

Net neutrality isn't the only issue at stake, though -- the FCC is hoping to raise expectations for American internet speeds, too. Its latest draft report redefines home broadband as 25Mbps downstream, and 3Mbps up. That's miles ahead of the 4Mbps baseline the regulator uses today, and faster still than the 10Mbps suggested back in May. Companies wouldn't be obliged to improve their speeds, but the proposal would have a big impact on the FCC's internet adoption policies, such as how it funds rural access and schools. Under the would-be definition, a whopping 17 percent of Americans don't have true broadband -- you may end up seeing more aggressive subsidies and other efforts to boost data speeds across the country. Service providers may hate it, but it'd be good news for Americans who don't want to be stuck in the slow lane simply because they live in the 'wrong' area.

Source: Ars Technica, The Verge, Senator Al Franken
In this article: broadband, fcc, internet, netneutrality, networking, proposal, regulation, ruralbroadband, tomwheeler
All products recommended by Engadget are selected by our editorial team, independent of our parent company. Some of our stories include affiliate links. If you buy something through one of these links, we may earn an affiliate commission.