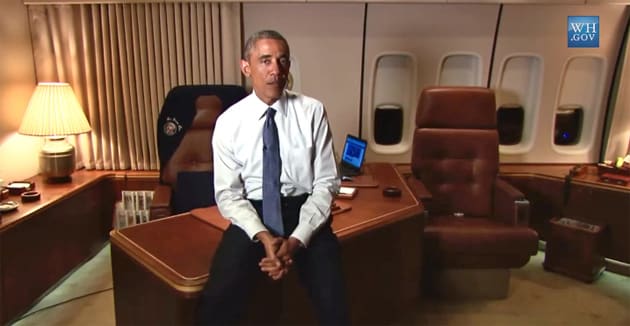 President Barack Obama is previewing parts of his State of the Union address in a bid to drum up support ahead of the big speech, and his latest effort is breaking some ground -- both in the policy and how he's presenting it. The head of state took to Facebook, Twitter and Vine to unveil a proposal that would give Americans two free years of community college so long as they maintain good grades and graduate. It's a rare move for discussing politics online. While the president regularly makes announcements on social networks, it's not often that you get a peek at the State of the Union while you're catching up on friends' status updates and looping cat videos.

The proposal itself is potentially significant for tech as well. If you meet the criteria, you either get two years of academic credit (which you can transfer to a public college or university) or a training program that gives you the skills to work in a given field. The move could lead to more locally-sourced tech workers, not to mention more incentives for companies to open US factories. There's no telling whether or not the idea would work as well as planned, and it's bound to face stiff opposition from Congress, but it's certainly a bold concept.

Source: White House (Twitter), (Facebook), White House Blog
In this article: Barack Obama, college, education, facebook, government, internet, obama, president, presidentobama, socialnetwork, socialnetworking, stateoftheunion, twitter, vine, whitehouse
All products recommended by Engadget are selected by our editorial team, independent of our parent company. Some of our stories include affiliate links. If you buy something through one of these links, we may earn an affiliate commission.