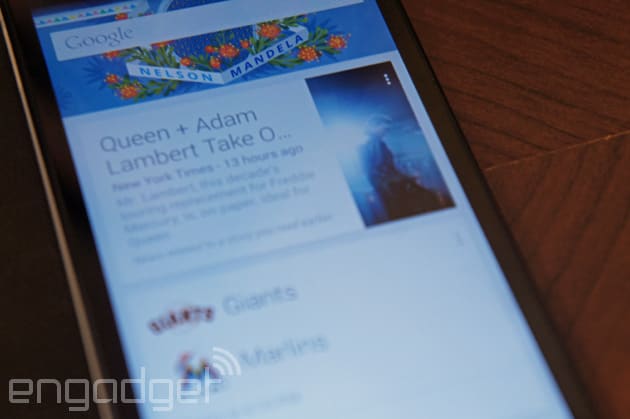 As convenient as Google Now may be, it has its limits: you're limited to Google's official services, and it's not very useful when you're driving or otherwise can't stare at your phone. A recent Android Police teardown of Android's search app has revealed that Google is exploring a handful of new features that would let you use Now in more situations. To begin with, there's preliminary code for spoken notifications. If you're on the road, you could get your phone to read traffic warnings aloud instead of distracting yourself by looking at the screen. There have been hints of a hands-free mode in Android for a while, but the new code hints that you might not even need to look in many cases.

There are also early signs of Google opening the floodgates to third-party apps and services. The leak reveals icons for sharing info through non-Google social networks such as Facebook, Pinterest and Twitter, and a cryptically titled "third_party_welcome" view suggests that non-standard apps may eventually post their own Now cards. However, "may" is the operative word for many of these discoveries. Google frequently includes pre-release code in its search software, but you can never be completely sure that this work will see the light of day. If nothing else, though, it's apparent that Google still has plenty of upgrades in mind for its most important mobile app.

Source: Android Police
In this article: android, google, googlenow, internet, mobilepostcross, notifications, search, smartphone
All products recommended by Engadget are selected by our editorial team, independent of our parent company. Some of our stories include affiliate links. If you buy something through one of these links, we may earn an affiliate commission.