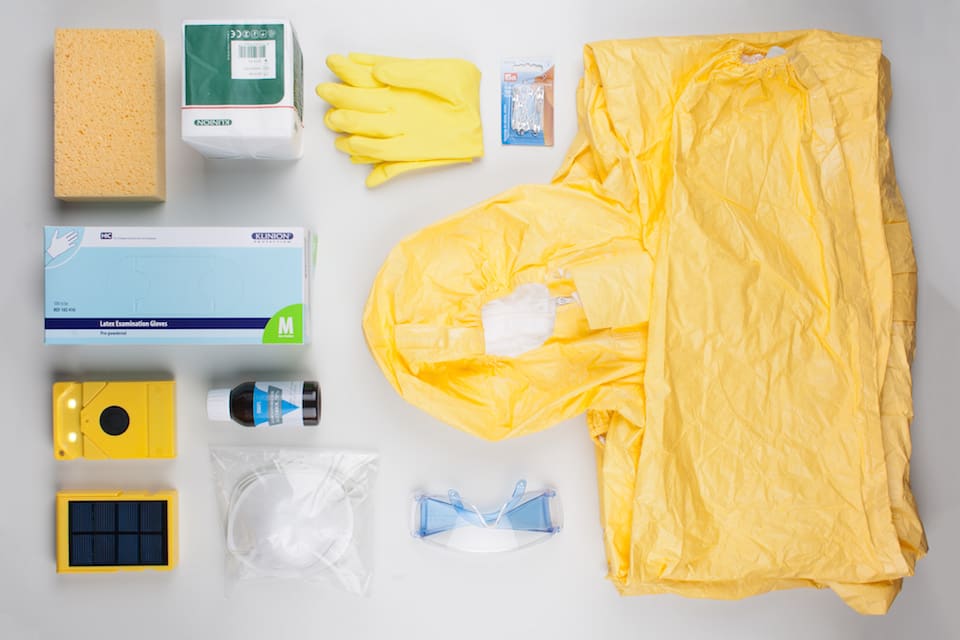 Every year, CES manages to bring thousands of exhibitors to Las Vegas, spreading them across the Las Vegas Convention Center and throughout hotels like Mandalay Bay, Sands Expo and The Mirage. For members of the media, the abundance of companies at the show makes the task of keeping up with every one of them extremely hard -- but it must be done. Exhibitors, on the other hand, have to reach out to journalists and host press conferences in hopes of getting valuable airtime for their product, whatever it may be. Naturally, due to the madness that is CES, smaller companies have to get creative to compete for attention with the tech giants of the world, such as Samsung, LG, Sony and more. And it helps tremendously if their product is, you know, actually good.

So, when we got an email with a subject line that said, "WakaWaka Brings Ebola To CES," we instantly took notice. According to recent statistics, Ebola is estimated to have infected more than 20,000 people worldwide, the majority of them in West Africa. To date, the deadly virus has taken roughly 8,000 lives. At first glance, you think, "Are they seriously using a disease for promotional purposes?" Indeed, the company behind it, WakaWaka, wasn't really bringing Ebola to CES, but that's quite a bold way to approach pitching a story to journalists and other CES attendees.

In fairness, once you get past the sensational subject line, the company is actually doing something really great. With its WakaWaka Power+, it recently adopted a buy-one-give-one model -- similar to how Toms donates a pair of shoes to people in need for every one that gets sold. The Power+ is a solar-powered portable charger that sells for $79, featuring a 2,200mAh battery that gives you up to six hours of extra energy. The 1,050-milliwatt SunPower cell on the device can get a full charge in 12 to 24 hours, which allows it to power two built-in LEDs and to send a charge out by way of USB. Here's what WakaWaka does: For every unit it sells, it matches the purchase and sends one to people who don't have access to electricity. This buy-one-give-one initiative will affect people in various places around the world, including Sierra Leone, Siberia and refugee camps in Syria.

During CES, WakaWaka's goal was to expand its efforts in West Africa, where the Ebola virus has been spreading at alarming rates. Thanks to the LEDs found on the Power+, medics providing relief to people infected with Ebola are able to have a source of light that otherwise wouldn't be there -- according to WakaWaka, more than 90 percent of people in Liberia and Sierra Leone are without power every day. With that in mind, the company launched an Indiegogo campaign earlier this week to bring awareness to this issue. The project has since met its crowdfunding goal of $5,000, and there's still time to contribute. Altogether, not counting its most recent Indiegogo page, WakaWaka says it has had an impact on 650,000 people worldwide, with more than 400,000 units sold.

Now, was the idea to tie Ebola to its product opportunistic? No doubt. Still, WakaWaka says it doesn't regret making the bold decision to send that email. "You have to really go out of your way to bring in attention to your product," WakaWaka Founder and CEO, Camille van Gestel, said when I asked about why he felt the need to claim they were "bringing" Ebola to CES. "There's a lot of media attention around the world and Ebola disappears to the background, when we haven't seen the peak of this virus." 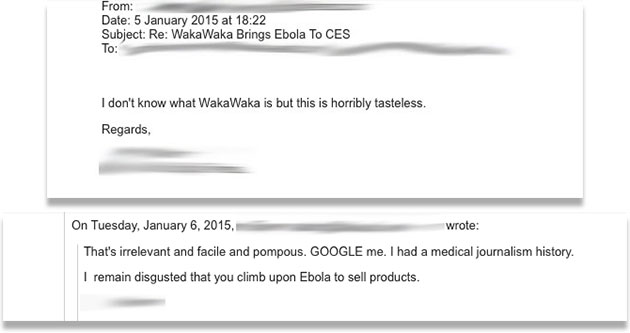 Not surprisingly, there were people who received the email that didn't take Ebola's mention in it lightly. While not all replies were negative, we managed to compile a couple of the least appreciative that were sent to WakaWaka. "I don't know what WakaWaka is but this is horribly tasteless," read one of the emails sent to the company. Another reply called WakaWaka's email "pompous." The same person who wrote that said, "I remain disgusted that you climb upon Ebola to sell products," after a representative tried to explain in detail what it is the company was trying to do.

At the end of the day, van Gestel said it was worth it, adding that the response during CES has been tremendous. "If you really want to make an impact, there [are] always people who want to challenge it," he said. "We are not abusing it [the Ebola term] to make money; we are using it to make [an] impact."

"It's important for us to see this through until we meet our mission to provide power to 1.2 billion people," van Gestel stated.

Source: WakaWaka (1), (2)
In this article: CES, CES 2015, CES2015, Ebola, hands-on, uk-feature, WakaWaka
All products recommended by Engadget are selected by our editorial team, independent of our parent company. Some of our stories include affiliate links. If you buy something through one of these links, we may earn an affiliate commission.