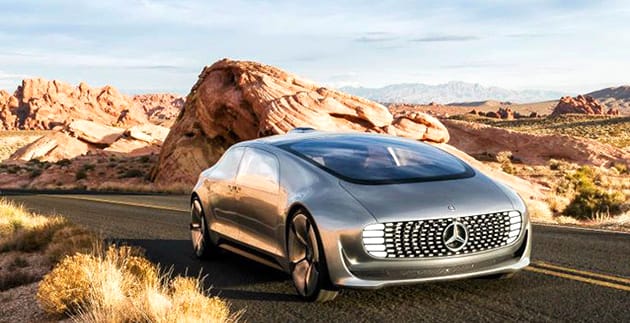 High-speed rail projects have been slow to catch on in the United States, but that could change now that the nation's first high-speed rail line has officially broken ground in California. When it's completed, the rail line will link San Francisco and Los Angeles, and it will travel at more than 220 miles per hour. In other green transportation news, Mercedes-Benz just unveiled its futuristic concept for a self-driving, hydrogen-powered car at the Consumer Electronics Show in Las Vegas. The car uses a series of cameras, ultrasonic sensors and radar to drive without any intervention from passengers.

Taiwanese startup Gogoro unveiled a new electric scooter with a battery-swapping system that could revolutionize urban transportation. According to Gogoro, batteries for the bikes can be swapped out in six seconds flat. Also at CES, Chevy gave the world a sneak peek at the 2016 Volt, which will have a longer electric-driving range than the first generation car. Taking a page from Tesla's playbook, Toyota announced that more than 5,600 of its fuel cell-related patents are available for free. The automaker hopes the move will spark fuel cell innovation around the world. And this week, Detroit Electric unveiled the production version of its SP:01 electric sports car, which will be the world's fastest pure-electric two-seater car.

Bridging the fields of transportation and renewable energy, Margot Krasojević recently released designs for a solar-powered, perpetual-motion sailboat that uses concentrated solar power to run its motorized mast. The boat will use hydrofoils to lift its hull out of the water, decreasing drag and allowing for greater speeds. Inhabitat's own Tafline Laylin produced a new video explaining how to retrofit your car with solar panels produced by Voltaic Systems. In other energy news, the 114th Congress opened last week, and Republican lawmakers made it clear that they intend to force through a bill approving the Keystone XL Pipeline. President Barack Obama's only recourse would be to veto the project, and White House Press Secretary Josh Earnest has said that he intends to do just that. In Mexico, the city of La Paz is expected to be powered entirely by solar energy when a new photovoltaic plant goes online later this year.

On the green tech front, Panasonic has developed new technology that can purify water with sunlight. The new approach uses a combination of sunlight and photocatalysts to turn polluted groundwater into clean, drinkable water. Another concept that promises to ease the world's chronic water shortages is the Warka Water Tower, a large basket-shaped structure that can turn dew, fog and rain into potable water. And Bill Gates showed his faith in next-gen wastewater-processing technology by drinking a tall glass of water made from sewage sludge. Refrigerators are among the most power-hungry appliances in a typical home, so the company Phononic decided to reinvent the fridge, producing a new solid-state refrigerator that is more reliable, greener and quieter than most modern refrigerators. In other green product news, Israeli designer Hilla Shamia is creating some of the world's most unique furniture, using a process that involves casting natural wood with molten aluminum. And Dutch designer Teresa van Dongen has created a lamp that glows with bioluminescent bacteria, requiring no other energy inputs. In the world of wearable tech, a Silicon Valley-based company just unveiled a smart messenger bag that can answer your calls hands-free, features Bluetooth-enabled music playback and includes GPS tracking. And looking forward to the year ahead, Ecouterre -- Inhabitat's green fashion sister site -- reached out to 39 eco-fashion leaders for their 2015 eco-fashion predictions.

A private Russian company says it wants to build an outpost on the moon. The price tag for the proposed lunar base would be about $9.3 billion. Scientists still have plenty to learn about Earth, too. Workers who were preparing to build a new housing development recently discovered a 5,000-year-old underground city in the Cappadocia region of Turkey. The city is one of the biggest archaeological finds of all time.