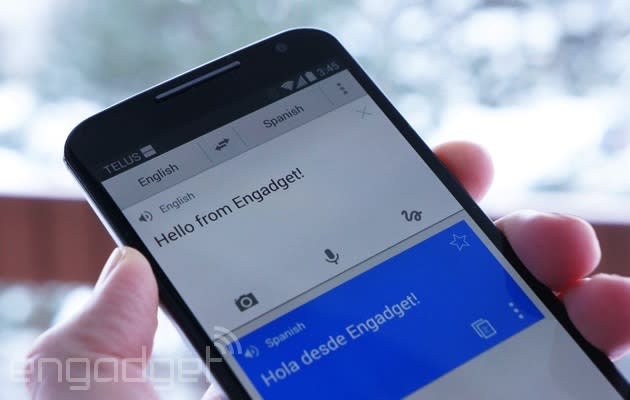 Even with the assistance of modern technology, holding a conversation in two different languages can be difficult. Google Translate allows you to speak with someone and have each utterance translated as text and audio, but until now you had to manually toggle every time the other person talked. As expected, Google is speeding up the process with smarter language recognition and speaker switching, which comes as part of a new update. So when you boot up the app and press the microphone icon, it'll recognise which of the two languages is being spoken, offer a translation and then automatically alternate whenever the conversation flips over. No more tapping on the screen again and again.

In addition, Google has revamped its camera mode to quickly translate words and phrases directly on your screen. So if an important sign on the Paris Metro has you stumped, you should be able to just grab your smartphone, tap the camera icon and wait for a translation to appear augmented reality-style. The feature currently works for English, French, German, Italian, Russian, Portuguese and Spanish words, and Google says it'll be adding support for additional languages over time. Of course, this is hardly a new idea -- Word Lens had a similar proposition, and ever since Google acquired its developer Quest Visual we've been waiting patiently for its inevitable debut.

In this article: Android, app, google, GoogleTranslate, IOS, language, translate, translation, translator, video
All products recommended by Engadget are selected by our editorial team, independent of our parent company. Some of our stories include affiliate links. If you buy something through one of these links, we may earn an affiliate commission.