As MMO players surely know by now, Guild Wars 2: Heart of Thorns is the first expansion ever for the ArenaNet MMORPG. In fact, most everyone suspected the announcement thanks to the leaked trademark information. But that didn't stop fans from being excited about it, nor did that bit of information satisfy their hunger.

The emcee for the reveal event was none other than voice actor Jennifer Hale, whose voice players might recognize as Queen Jennah's. President and CEO of ArenaNet Mike O'Brien and game director Colin Johanson teased the PAX South crowd of over 1,500 fans waiting in the main theater. But the anticipation for the new expansion started well before anyone even came to the stage. 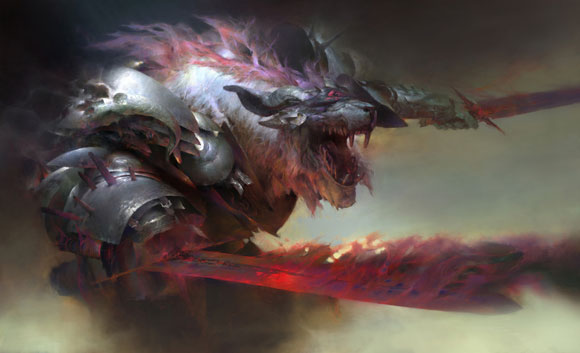 The crowd in the theater was downright salacious, loud in their excitement to find out whether their hunches would be confirmed. As we waited for the presentation to start, fans banged together clappers in a feverish roar any time an ArenaNet employee would step briefly out of the shadows of the theater while setting up for the presentation. Then, as if directed by an invisible conductor, they clapped in a rhythmic beat that ended in a loud cheer. Unfortunately, the chant was unsuccessful in drawing anyone to the stage.

Of course, the first person who did finally take the stage was Hale, whose sole job appeared to be pumping up the crowd. Clearly, that wasn't necessary given how much the crowd was already getting itself excited.

The cheers shook the floor of the theater when Hale introduced O'Brien. The president of ArenaNet gave us a breakdown of how the story of Guild Wars 2 has progressed until now and where it's going. After the 40 living world events, he reminded us, the capital city of Lion's Arch is still in ruin and Rytlock has gone off to do his thing in the Maguuma jungle. This is where Heart of Thorns begins. 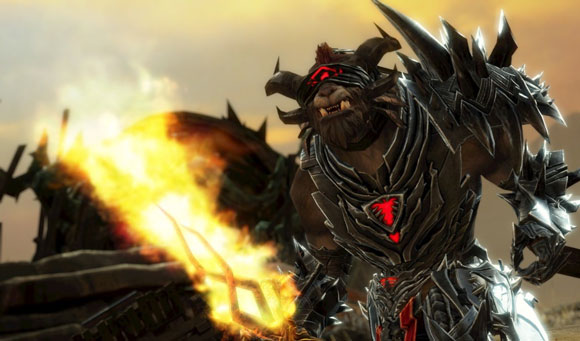 The trail of the trailer

Let's talk about that trailer a little bit. Whom did we see first but Rytlock, pacing through what appeared to be a thorny desert, which turned into a thorny jungle. The thorns were cool, and so was the fact that Rytlock was carrying a giant sword, but what captured my attention was the blindfold. Why was this famous character wearing a blindfold? This little detail gave me pause. For me, it harkened back to my favorite Guild Wars class: the Ritualist. My inner Guild Wars fan boy, the one who seems to pop up any time I'm within 100 yards of an ArenaNet employee, started squealing a little bit. And I'm not even Massively's resident Guild Wars nut!

The next thing that really stood out to me was the hang gliders. Instantly, I thought about flying mounts. And I have to say, that I was a little disappointed when seeing them. I'm not against flying mounts as a rule, but it seemed to be against the Guild Wars 2 style. Thankfully, I was wrong about them.

The next thing I noticed was what looked to be a Mesmer holding a sword and shield. I was actually surprised because I didn't play a Mesmer very long, but Mesmers can't use shields; I was always partial to the pistols for my off hand, personally. But that led into a bunch of other classes holding weapons that they shouldn't. In fact, for pretty much the rest of the video, that's what I was looking for. Was that an Elementalist with a hammer? That's it. I'm sold. And Colin hadn't even got up to speak yet! 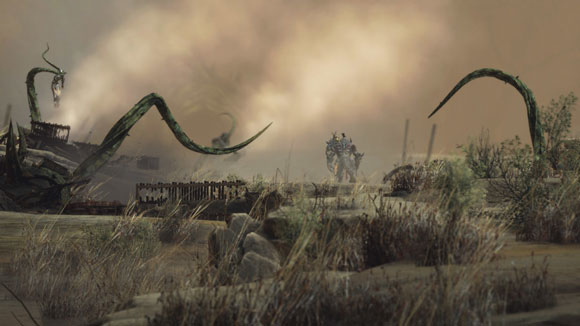 I'm glad to say that I was wrong about a couple of the teases ArenaNet gave us via the trailer video. O'Brien spoke right to the heart of every disappointed MMO player when an expansion for a favorite game comes out: He said that no one wants past character progress to be worthless or completely lost as it is in most other MMOs. That means the level cap is going to remain 80, and for progression, we will learn what ArenaNet calls Masteries.

Masteries are similar to extra skill points, but they are actually another progression line all together developed specifically for PvE and specifically for use in Maguuma. They include hang gliding, which is not exactly a flying mount. It's more like an ability, and the ability grows as you spend Mastery points. And the great thing about Mastery points is that they are account-wide. Every single ability that you unlock with one level 80 character will be available to any other level 80 character on your account. I guess that means I need to go unlock another couple before this goes live.

In the specialization system, your existing characters will be able to wield weapons that they haven't been able to use before. That's why you see a shield-bearing Mesmer and a hammer-toting Elementalist. Of course, with these new weapons, you also gain new abilities.

What about Rytlock in the blindfold? The class is called the Revenant, and his power comes from the Mist. He is able to call on the powers of the heroes of the past and use them. So my hunch was a little bit right and a little bit wrong. I was right to think of the Ritualist, though she wasn't exactly the same. She called up spirits to do the dirty work, but she also didn't wear heavy armor.

I don't want to leave out some of the important things that were discussed, like PvP, but during Massively's followup interview with O'Brien and Johanson, we did focus on PvP, and Mike told me that he has some juicy quotes from Johanson about the guild-oriented Stronghold PvP map. Look for that interview tomorrow.

I'm always impressed by not only the ArenaNet staff but the Guild Wars 2 players themselves. That might be why that Johanson and O'Brien kept calling the Guild Wars 2 community the friendliest community in all of online gaming. Even as someone who's not a regular player of Guild Wars 2 (SWTOR is my domain), I can appreciate what the game will offer, and I will certainly be buying the expansion when it releases -- although that "when" is yet to be announced.

Massively's on the ground in San Antonio during the weekend of January 23rd to January 25th, bringing you all the best news from PAX South 2015. Whether you're dying to know more about Guild Wars 2's Heart of Thorns, hoping to catch a glimpse of Elite: Dangerous on the Oculus Rift, or angling for some rumors from the SWTOR cantina crawl, you can bet we'll have it covered!
In this article: anet, arenanet, buy-to-play, classes, colin-johanson, con, convention, event, event-coverage, events, expansion, expo, fantasy, featured, guild-wars-2, gw2, heart-of-thorns, jennifer-hale, massively-event-coverage, mike-obrien, ncsoft, pax, pax-2015, pax-south, pax-south-2015, penny-arcade-expo, revenant, rytlock-brimstone
All products recommended by Engadget are selected by our editorial team, independent of our parent company. Some of our stories include affiliate links. If you buy something through one of these links, we may earn an affiliate commission.