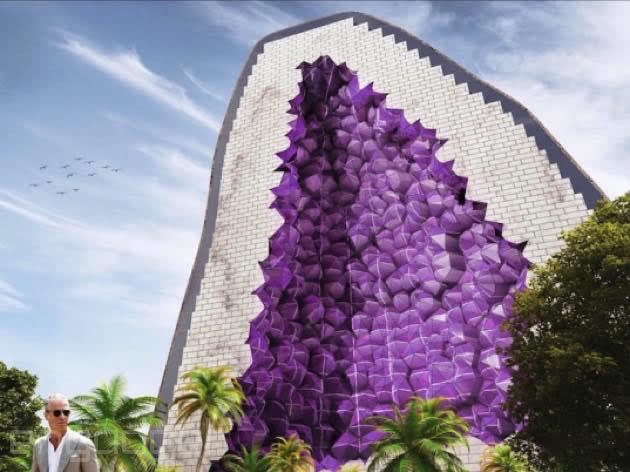 One of America's most innovative solar power plants officially opened in the Mojave Desert this past week, and it's expected to provide enough energy to power nearly 90,000 homes. The Mojave Solar Project is a concentrated solar plant that uses parabolic troughs to create steam, which produces energy when passed through a turbine generator. In other renewable energy news, the folks at Solight have developed a compact solar-powered lantern that provides off-grid light to communities that lack electricity. The flat-pack, LED lantern was inspired by the 2010 earthquake in Haiti, and it's designed to replace kerosene lanterns. Swiss aviators Bertrand Piccard and André Borschberg are preparing for the first-ever flight around the world in a solar-powered aircraft. With the flight, the two pilots hope to gain broad support for solar energy. On the green transportation front, self-driving cars are widely believed to represent the future of transportation, but scientists at NASA are already looking further into the future. NASA and Nissan are partnering to research how autonomous vehicles could be used not only here on Earth, but also in space. And in Mexico, a company has produced a bamboo bicycle that generates energy as you pedal around town. The BambooTec bike captures and converts the kinetic energy into electricity, using that energy to charge mobile devices. Best of all, the designs are simple enough to be built by hand.

President Barack Obama has no more campaigns to run, so is he finally ready to get tough on the environment? Obama didn't make any promises in his State of the Union address last week, but he did acknowledge that climate change is the biggest threat we face. In other environmental news, a new report released by the UN Food and Agriculture Organization says that climate change is threatening global food diversity and could cause crop extinctions. A new photo gallery produced by NASA shows just how much climate change is transforming the planet. The 300 photos and satellite images show everything from receding glaciers to shrinking lakes and disappearing forests.

In preparation for increasingly powerful storms that are brought on at least in part by climate change, New York City is taking small steps to implement storm-resilient green infrastructure in lower Manhattan. In other Big Apple news, NYC's largest wind turbine was recently erected in Brooklyn. The 160-foot-tall turbine is expected to generate up to 100 kilowatts of clean energy for a recycling center in Sunset Park. And in a quest to learn about the many edible plants that surround us, Inhabitat caught up with "Wildman" Steve Brill for a foraging tutorial in Brooklyn's Prospect Park. Watch the video to see which medicinal plants, nuts and even edible flowers are hiding in plain sight in your local park.

In another example of nature-inspired ingenuity, designer Massimo Moretti has developed a way to create 3D-printed mud houses, and he hopes to use the technology to produce affordable housing from one of the planet's most abundant resources. A new 12,000-square-foot mansion in China was recently 3D-printed from recycled stone and construction waste. The printer used to build the house was 20 feet high, and spans 4,000 feet. In other green architecture news, Dutch design firm MVRDV won its bid to design a twisting, hourglass-shaped skyscraper in Vienna. The tower's unique shape will decrease the effect of shadows on surrounding buildings, and it will connect the building with the plaza below. Norwegian architecture firm Snøhetta has been tapped to design the new Le Monde headquarters in Paris. One of the most distinctive new buildings to be unveiled this past week was the Amethyst Hotel, a tower that resembles an enormous amethyst cathedral geode. The shimmering hotel will be built -- where else? -- on the man-made Ocean Flower Island in China.

In this article: 3d printing, climate change, EcoFriendly, green, inhabitat, InhabitatsWeekInGreen, self-driving car, solar
All products recommended by Engadget are selected by our editorial team, independent of our parent company. Some of our stories include affiliate links. If you buy something through one of these links, we may earn an affiliate commission.