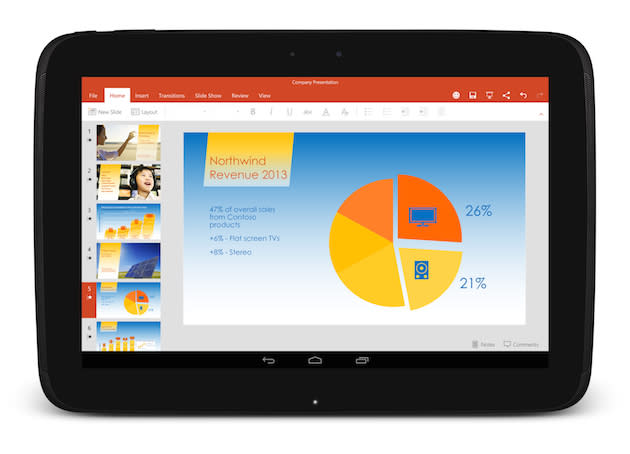 It's only been a few weeks since Microsoft released the preview versions of Office for Android, but the software giant is finally ready to bring the final version of those apps to Google Play. Starting some time Thursday morning -- we're hearing from around 10 a.m. ET onwards -- you'll be able to download the finished versions of Word, Excel and PowerPoint to your Android tablet. As before, the requirements for downloading said apps include having a tablet that's 7-inches or larger that's also running Android 4.4 KitKat or newer. They also have to have an ARM-based processor and 1GB of RAM or above. I had a chance to take a brief early look at the Office for Android apps, and I have to say Microsoft did a pretty good job in porting over its Office apps from desktop to the tablet. However, the first thing you'll be asked to do when you launch any of the apps is to sign up or log in to your Microsoft account -- that's the only way you can edit, save or print documents. It's a bit of annoyance, but seeing as the apps are free to download, I'll acquiesce. If you wish to use the app on screens that are 10.1 inches or larger, you'll have to pony up $6.99 a month or more for an Office 365 subscription. A subscription also offers premium features such as tracking changes in Word and getting the "Presenter View" in PowerPoint. You're also able to sync documents across devices if you have a subscription.

All of the Office apps have a similar home screen. Recently opened documents reside on the left column while templates for new documents sit on the right. At the bottom of that left column is a link to open other documents. You can store your files either locally on your device, on your Microsoft OneDrive account, at a SharePoint location or on Dropbox. The interface for each app is strikingly similar to that of their desktop cousins. As far as I can tell at first glance, the layout and functions on the apps are the same -- everything from editing slides in PowerPoint to creating charts and tables in Excel. I was a little skeptical that the apps would register my taps accurately, especially on a complicated spreadsheet on Excel, but they did. Resizing tables, text and images was easy and I didn't encounter too many bugs in general. Indeed, there were a few functions that actually benefited from a touch interface -- the ability to doodle and draw circles right on the PowerPoint slide with your finger is pretty great. It's worth noting here that while Word and Excel work in both portrait and landscape modes, PowerPoint is strictly landscape-only. That's not really a big dealbreaker though, as you would want your presentation slides to be in that format anyway.

We'll need a little more time to test these apps to really suss out their worth in day-to-day use, but at first glance, they're not too bad at all. Some of you must have thought so too, as Microsoft tells us that the previews alone generated more than 250,000 downloads across 33 languages and more than 110 countries. It's obvious that a lot of folks are Office aficionados who also happen to own an Android tablet. If that applies to you, stay tuned to that Google Play store, download the apps and let us know what you think. Here's hoping the Windows version of these tablet apps are as good or better.

In this article: android, microsoft, office, officeforandroid
All products recommended by Engadget are selected by our editorial team, independent of our parent company. Some of our stories include affiliate links. If you buy something through one of these links, we may earn an affiliate commission.