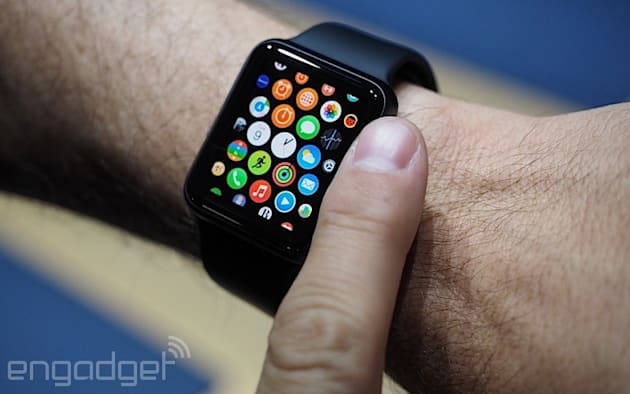 Apple apparently wanted its smartwatches to focus heavily on health-related features, but the company was forced to changed direction mid-development. According to The Wall Street Journal, the company originally envisioned a device that can monitor heart rate, blood pressure and stress levels (based on the conductivity of the skin). Unfortunately, the sensors they tested just didn't pass muster, which isn't entirely surprising, since we've reviewed plenty of wearables with patchy heart rate monitors in the past. The company's engineers found that hairy arms, dry skin and even how tightly the watch is worn can affect the results, and they didn't find a solution in time.

Apple Watch became known as a black hole within the company, the WSJ's sources said, as it continued sucking in resources for four years despite all the failures during testing. Its development slowed down once the company realized that a health-focused watch that meets its standards will be very hard to build at this time. The lineup of watches due out in April are a lot different from the original one Apple envisioned and are more of an iPhone companion with a much simpler pulse monitor and pedometer.

Still, the company's expecting to sell a ton, reportedly ordering around 6 million units from its Asian suppliers just for the first quarter. Half of those are the entry-level Apple Watch Sports, while the mid-tier stainless steel model makes up a third of that number. As for Cupertino's original vision, well, there's always a chance that we'll see it come to life in the coming years. The company has a good track record of substantially improving its devices after a debut model appears -- the first iPhone didn't have 3G.

Via: 9to5mac
Source: The Wall Street Journal
In this article: apple, AppleWatch, SmartWatch
All products recommended by Engadget are selected by our editorial team, independent of our parent company. Some of our stories include affiliate links. If you buy something through one of these links, we may earn an affiliate commission.