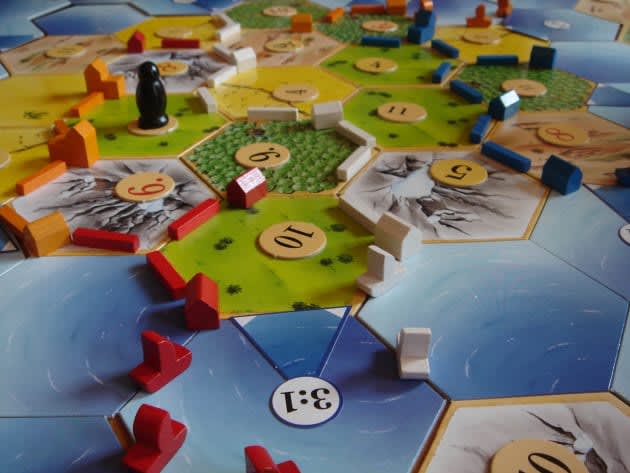 Settlers of Catan was perhaps the first board game I ever played that made me think board games were cool. The goal? To rule the fictional island of Catan. In order to do this, you build roads, settlements and cities with resources like brick, wood, sheep and ore, all while hoping you don't get robbed. It's a surprisingly strategic game, which is perhaps why it's won so many awards and gained quite a cult following, even spawning iOS and Android adaptations in recent years. But is it cool enough to be a movie? Gail Katz certainly thinks so. A producer known for movies such as Pawn Sacrifice, Air Force One and The Perfect Storm, Katz recently bought the film and television rights for the German-style board game, stating that she's excited by the "vivid, visual, exciting and timeless world" of Catan. Really?

See, while playing Catan might be fun, there really is little to no plot in this game. You're mostly just trying to build out your little empire by asking the other players to trade resources. You might say, "I need brick. Does anyone want to trade brick for some wood? No? How about I sweeten the deal with wood and sheep?" Then another player may or may not reciprocate, and you move on. Yes, it's an interesting enough game that it's good fodder for shows like The Big Bang Theory and indie movie The Lord of Catan (where the husband and wife protagonists spend an epic evening fighting over the game), but the story of Catan itself is not a super compelling one. It's like trying to make a movie based on Tiddlywinks.

That said, movies have been made out of games with weak stories before. Battleship, anyone? Even Monopoly apparently isn't safe from the film option biz. And let's not forget the many many many movies based on lackluster plot video games. I suspect that, just like those properties, a Catan movie will only be tangentially related to the actual game. Plus, someone managed to make a pretty good movie out of Clue (Hey, I think it's a great movie, okay?), so maybe there's hope yet.

Still, I can't help but think there are so many other board games that would make so much better movies. There's Mice and Mystics, Dead of Winter, Betrayal at House on the Hill, Arkham Horror, Shadows Over Camelot, Twilight Imperium... Oops, sorry, my nerd card is showing. I'll show myself the door.

Coverage: Variety
In this article: boardgames, movie, settlersofcatan, tvshow
All products recommended by Engadget are selected by our editorial team, independent of our parent company. Some of our stories include affiliate links. If you buy something through one of these links, we may earn an affiliate commission.