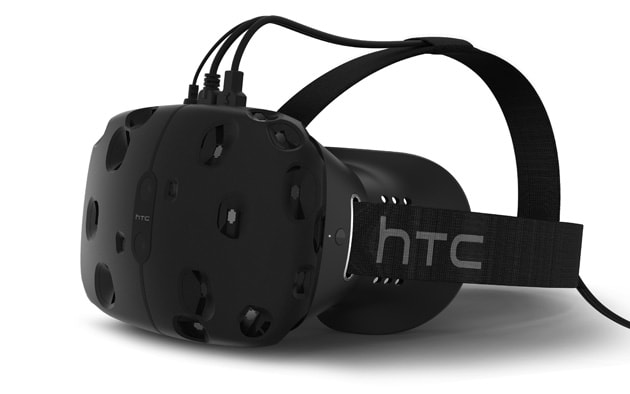 Of all the things we expected HTC to talk about at its MWC press conference, a design-focused virtual reality headset built in partnership with Valve definitely wasn't on the short list. It's called the HTC Vive and the two companies working on making it a reality call it the most immersive, most premium VR experience you'll be able to find on the market. We know what you're thinking, and yes: This is really happening. If all goes according to plan, the initial developer version of the Vive will trickle out into the community sometime this spring with a full consumer launch to follow during the holidays.

There's plenty to dig into, but first things first -- this does indeed appear to be the secretive SteamVR device that leaked in silhouette form last month. Despite HTC's involvement, the Vive isn't some smartphone-centric VR contraption like the one Samsung's already created, either. Since it's meant to be a top-tier VR device, it's going to plug straight into your PC for access to all that juicy 3D content. In fact, it's unlikely that a smartphone ever could've provided the horsepower needed to deliver the sorts of experience Valve is after here. The Vive's big, titanically huge draw is that it supports full, room-scale environments, so VR explorers can get up out of their seats and walk around the virtual objects in 360 degrees. Both companies are still being a bit vague about how this is all going to work (we know that some sort of "tracked controllers" will play a role in defining your place in 3D space), but we'll keep you posted as more details emerge.

Strange as this whole thing seems, it does sort of make sense. HTC is nothing if not an expert in crafting handsome, high-end pieces of gear. The size constraints it's used to working with may have made it an attractive partner for a huge game developer/distributor who wants to strap something onto our faces, too. And hey, this mash-up has attracted the attention of some big-name partners: Google's on board, as are HBO, Lionsgate, Owlchemy, Vertigo Games and Dovetail Games (to name a few). The ambition coursing through the air here is undeniable. Valve and HTC aren't just trying to change the way we game -- they're itching to redefine the way we travel, shop, communicate and be productive. We've heard this sort of high-level bluster before, and the industry has made plenty of steps since the early days of the Oculus, but consider us skeptics until we see the Vive do its thing in person.

In this article: gaming, htc, HTC Vive, HTCVive, mobilepostcross, mwc2015, steamvr, valve, virtualreality, vive, vr
All products recommended by Engadget are selected by our editorial team, independent of our parent company. Some of our stories include affiliate links. If you buy something through one of these links, we may earn an affiliate commission.