Orba is a tiny instrument that you shake, tap and twist

The Artiphon Instrument 1 uses an iPhone, Engadget tries it out 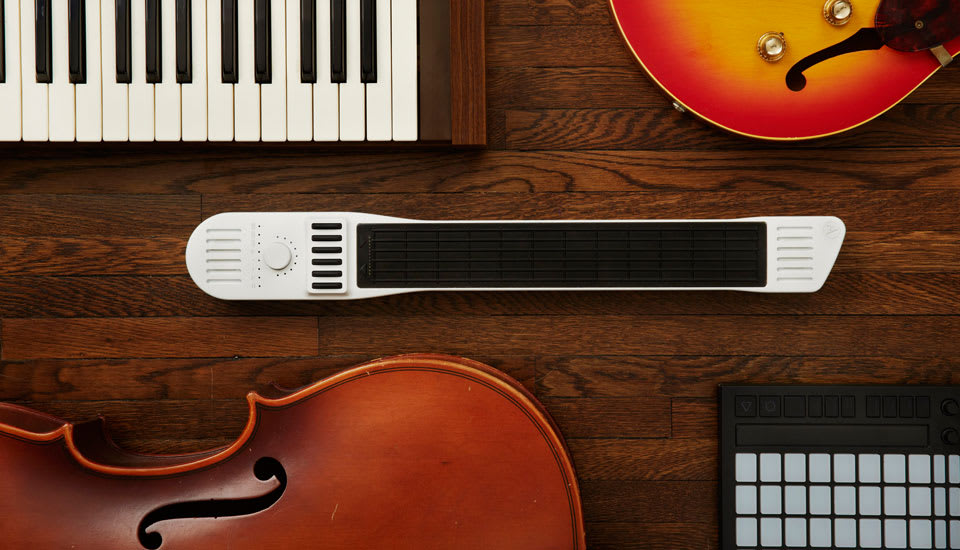 We first caught up with the folks behind Artiphon at NAMM 2013, and after taking the time to redesign its Instrument 1, the company is hoping to crowdfund the device. For those that may not remember, the gadget not only handles the functions of multiple instruments, but it adapts to the musician's skill level as talents progress. The Instrument 1 also serves as an input device for a truckload of music-making apps (like GarageBand or Animoog) on iOS, and thanks to a USB and Lightning jacks, can fill in as a MIDI controller, too. And if you're looking to make a custom instrument for specific results, the Aritphon app will allow you to do just that, in addition to serving up an arsenal of different music-making options. Need a piano? It's there. A violin? No problem.

I already mentioned the redesign, and the most striking difference is the smaller size. The version of the device that we saw two years ago had a built-in dock for an iPhone, but now, the instrument connects via Lightning cable to either an iPad or an iPhone for tweaking and recording. This new model is 23.5 inches long, with speakers on each end of the front. A pressure- and velocity-sensitive fingerboard is still where a bulk of the activity is done, and there are capo buttons to handle those guitar-like tasks. What's more, that touch panel also allows you to play two notes at once as well. Instrument 1 doesn't have strings, but it does have a six-button bridge for strumming, picking and bowing -- just like you'd expect from a guitar, banjo, violin and more. An on-board volume control doubles as a mode selector, toggling between four built-in presets and four user-programmable modes.

In addition to the MIDI feature, there are jacks for headphones and microphone input. Finally, Instrument 1 runs on a rechargeable battery, so once you've configured the set of instruments you need, the device is as portable as an acoustic guitar. If you're already hooked, folks who act quickly over at Kickstarter can nab one -- in either black or white -- for $299. The reduced campaign price is $349, and you can expect to pay $50 more when the music maker hits retail. Prefer something a bit more sophisticated? There's a $899 Nashville Edition with a hardwood back side too, and all three are scheduled to arrive in January 2016.

Source: Kickstarter
In this article: artiphon, artiphoninstrumen1, audio, instrument, instrument1, kickstarter, midi, music, usb
All products recommended by Engadget are selected by our editorial team, independent of our parent company. Some of our stories include affiliate links. If you buy something through one of these links, we may earn an affiliate commission.