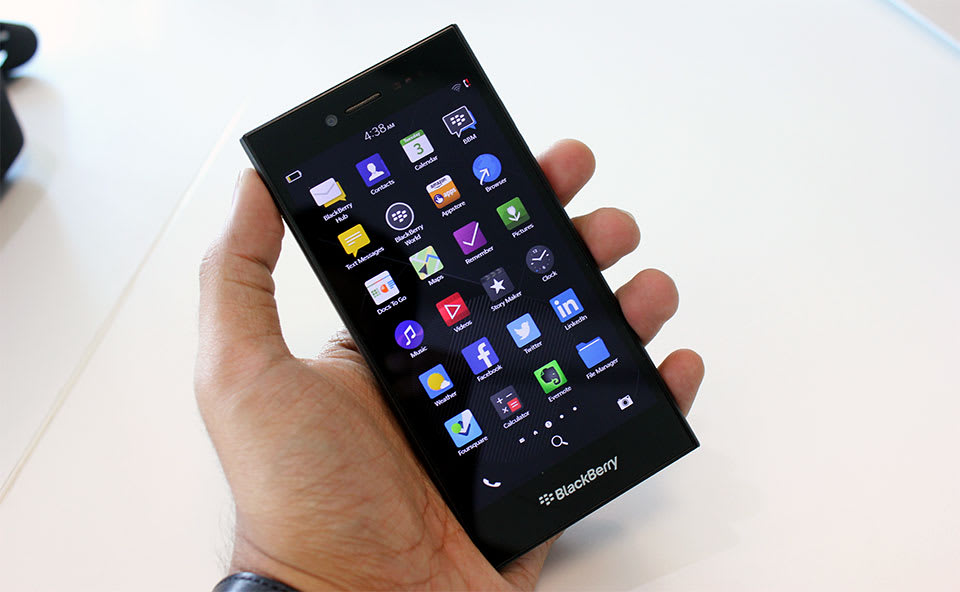 BlackBerry spent a long, long time courting the world's business buffs, and for a while its phones were corporate icons as much as they were communicators. Now the folks in Waterloo are making another play for all the "young, mobile professionals" out there... or at least ones that don't give a lick about what's ticking away inside their phones. See, the Leap is BlackBerry's latest attempt at clawing into youngsters' pockets and it comes bearing a few familiar-sounding parts from years past. That might not be a dealbreaker considering the Leap'll cost you only $275 without a contract, and you know what? The thing actually makes a pretty good first impression. I really don't mean to sound so surprised, honest. After all, the Leap certainly feels pretty great. With its finely dimpled back and a glossy black strip that encloses the 8-megapixel camera, the whole thing feels awfully Classicky; that is, dense and reassuring. Like its more expensive cousin, the Leap feels like a dense instrument instead of a gadget, something the Z10 definitely couldn't claim. The screen's actually not bad, either: It's a 5-inch IPS LCD running at 720p with solid color reproduction and brightness. Viewing angles were pretty rough, though -- you corporate-espionage types won't glean a lot when you give a Leap a sidelong glance on a long plane ride.

Thing is, the Leap uses the same dual-core Qualcomm chipset as the years-old Z10 and the newish Classic. I try not to discriminate against time-tested silicon, but the pairing of BlackBerry OS and that dual-core 1.5GHz processor yielded plenty of annoying little hiccups when I took the Classic for an extended tour. Suffice it to say my hopes weren't all that high at first. After getting BlackBerry staffers to disable demo mode, it didn't take long to be washed over with some intense nostalgia -- swiping around had the same slightly slow-motion feel as the Classic. It's not outright bad -- not at all -- but it's like the UI is always just a fraction of a moment slower to respond than it should be. The Leap isn't ready for the masses yet, but it seemed stable enough during our time together -- barring any huge software fixes, significant leaps in performance probably won't materialize before this thing hits the market. Still, a guy can dream, right?

In this article: blackberry, blackberryleap, blackberryos, leap, mobilepostcross, mwc2015, smartphone
All products recommended by Engadget are selected by our editorial team, independent of our parent company. Some of our stories include affiliate links. If you buy something through one of these links, we may earn an affiliate commission.