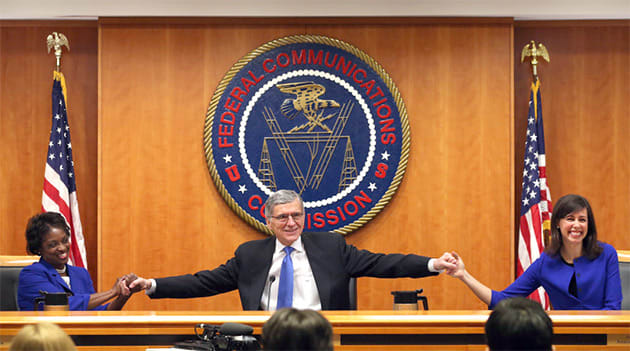 When the FCC's commissioners gathered to vote on the future of the internet as we know it a few weeks ago, the actual plan was shrouded in by ambitious (if broad) rhetoric. No paid prioritization? Equal application to wireless services? The thoughtful ignoring of parts of the Telecommunications Act so internet providers wouldn't go absolutely batty? It all sounds pretty reasonable spoken aloud -- even if those providers are pitching a fit anyway -- but until now the public hasn't had the chance to pore over exactly what the FCC spent so much time deliberating on. The FCC has just released the full text of its Open Internet Order, which lays out its contentious vision for how the internet should be managed, along with each commissioner's affirming statement or dissent on the issue. The whole shebang weighs in at about 400 pages, but we'll be spending some time today sifting through the thing to see what juicy bits turn up. In the meantime, feel free to take a gander at the document in its desk-shaking entirety below.

Source: FCC.gov
In this article: cable, fcc, internet, mobilepostcross, netneutrality, tomwheeler, wireless
All products recommended by Engadget are selected by our editorial team, independent of our parent company. Some of our stories include affiliate links. If you buy something through one of these links, we may earn an affiliate commission.