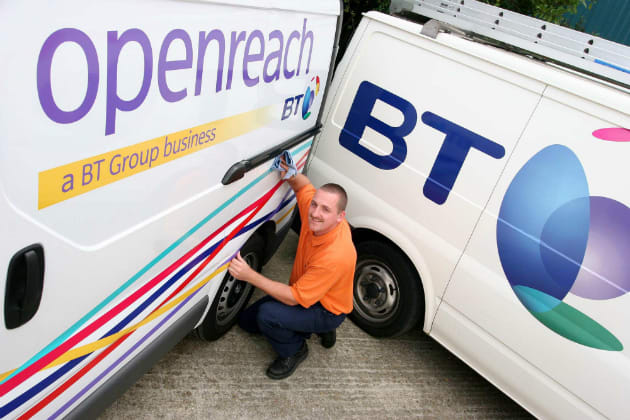 Back in 2006, Ofcom forced BT to set up Openreach, a separate division that manages its network infrastructure across the UK. The agreement struck between the pair was designed to give rival telephone and internet service providers (ISPs) equal access to BT's wide-reaching network of copper and fibre cables, promoting much-needed competition and, as a result, lower prices and better services for the consumer. Now, Sky and TalkTalk are urging Ofcom to split up BT and Openreach once and for all.

TalkTalk's CEO Dido Harding says it's "crucial" that Openreach is separated because it would encourage the subsidiary to focus exclusively on the quality of its network. The looming BT and EE merger "threatens to make a bad situation worse," Harding claims, because the pair will have too much influence over the UK telecoms market and reduce their level of investment in Openreach. Sky's comments are less aggressive, but its position is essentially the same. CEO Jeremy Darroch says splitting Openreach and BT "is at the heart of creating a sustainable industry" that allows multiple providers to compete.

Why are these companies hitting their respective soap boxes right now? Well, Ofcom just announced its second 'Strategic Review of Digital Communications.' The first led to the creation of Openreach, so unsurprisingly, BT's rivals see this fresh examination as a prime opportunity to push for change. However, it's going to be a while before we find out if Ofcom agrees with their sentiments. A "discussion document" is scheduled for this summer, but the regulator's initial conclusions won't be published until the end of 2015.

Source: TalkTalk, Sky, Ofcom
In this article: BT, Ofcom, Openreach, Review, Sky, TalkTalk
All products recommended by Engadget are selected by our editorial team, independent of our parent company. Some of our stories include affiliate links. If you buy something through one of these links, we may earn an affiliate commission.