PSA: Download Windows 10 by 6AM ET or pay full price 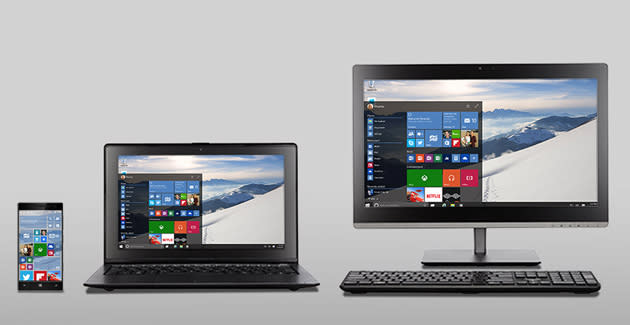 Microsoft's leaner, meaner, latest iteration of Windows is coming in just a few months, and it's launching in 170 countries, in 111 languages. Don't forget: Windows 10 is a free upgrade if you're already using Windows 7 or 8. Hiding in its imposing shadow, and launching at the same time, the company will release special free version of its OS for Internet of Things devices, which Microsoft's Terry Myerson reckons could well find its way into ATMs and ultrasound machines. Curiously, anyone that has a Xiaomi Mi 4 will also able to download the preview of Windows 10 ahead of it's release -- despite it being an Android phone.

Update: Microsoft's generosity continues to grow. Reuters reports that the free upgrade for users on Windows 7 and 8 includes all versions -- genuine or otherwise. Terry Myerson, Microsoft's Executive Vice President of Operating Systems, told the news agency that "We are upgrading all qualified PCs, genuine and non-genuine, to Windows 10." The report only mentions China, a huge market where piracy of Windows is rife. Ballmer once stated the firm makes more revenue from the Netherlands, than China. It seems the idea is to get more official users, and then up-sell them later on Microsoft's extended suite of software and services. Whether the same treatment will be given to those with bootleg copies elsewhere remains unclear.

In this article: freeupgrade, internetofthings, iot, microsoft, windows, windows10
All products recommended by Engadget are selected by our editorial team, independent of our parent company. Some of our stories include affiliate links. If you buy something through one of these links, we may earn an affiliate commission.