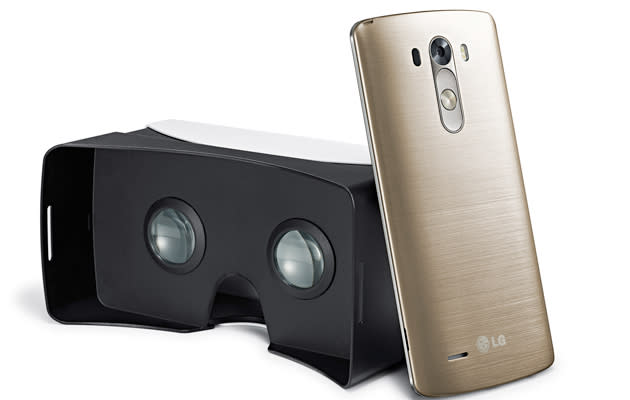 LG's new mobile VR headset -- which is basically just a plastic version of Google's cardboard VR viewer -- is finally hitting American shores. The company just announced that it'll be throwing in a free headset, simply called the VR for G3, with the purchase of its latest flagship Android phone at participating retailers. Since it's adopting the Google Cardboard platform, which is just a box that you can plug your smartphone in for simple VR experiences, there really isn't much to LG's offering. You just need to slide in a G3 unit and load up a VR app (LG will also link users to some VR gaming content). It also features a magnet that works together with the phone's gyroscope (again, just like Google's box), that lets you select things without interacting with the screen. Unfortunately, it's still unclear how existing G3 owners can get their hands on LG's VR headset (we've dropped a line for additional details).

It may seem a tad gimmicky, but a cheap VR headset will allow consumers to get a taste of the virtual reality experience without shelling out for an expensive accessory like Samsung's $200 Gear VR. And while it certainly won't compare with complex VR tech from Oculus, HTC and Valve, the VR for G3 is a reminder how small the barrier to entry for VR is getting.

In this article: G3, lg, mobilepostcross, virtual reality, VR, VR for G3
All products recommended by Engadget are selected by our editorial team, independent of our parent company. Some of our stories include affiliate links. If you buy something through one of these links, we may earn an affiliate commission.