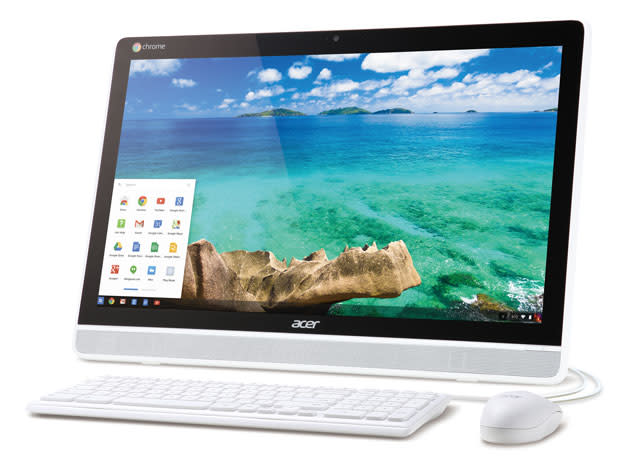 Intrigued by the idea of an all-in-one Chrome OS computer, but were hoping for something a little more exciting than the likes of LG's Chromebase? You've got it: Acer has just unveiled its own Chromebase. The system has a 21.5-inch 1080p display like its LG rival, but it's the first to include a touchscreen for those times you want to share input (or just can't be bothered to reach for the mouse). It's also running on NVIDIA's Tegra K1 chip rather than the speedier Intel Celeron of its competitor, although that's not necessarily a bad thing if you're looking for a quiet, low-powered PC. Whether or not it has the lower cost to match is up in the air, however. Acer ships its Chromebase to Asia and North America in the second quarter of the year, but it hasn't divulged pricing just yet.

In this article: acer, all-in-one, chromebase, chromeos, computer, desktop, pc, tegrak1
All products recommended by Engadget are selected by our editorial team, independent of our parent company. Some of our stories include affiliate links. If you buy something through one of these links, we may earn an affiliate commission.