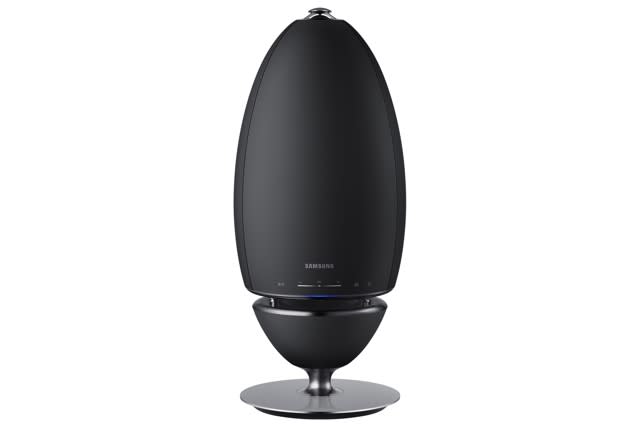 You'll soon be able to get your hands (and ears) on that omnidirectional, Portal-esque wireless Samsung speaker we saw during CES. It's officially dubbed the Radiant 360 R7, and it'll be available later this month for $500. The R7 uses Samsung's new "ring radiator" technology to deliver sound in every direction -- meaning you won't have to worry about where, exactly, you're placing it. At that price, it's not exactly the ideal wireless speaker for everyone, especially when you could invest in a couple Sonos speakers for the same amount. But, at the very least, it gives Samsung a well-designed entry for its own ecosystem of audio gear. The R7 works with the company's new Multiroom App, which lets you share music across several devices. And, of course, it can connect wirelessly to some of Samsung's TVs and soundbars. There's still no word yet on when Samsung's other ring speaker, the more lamp-like WAM6500, will be available.

In this article: Radiant 360 R7, samsung, wireless speakers
All products recommended by Engadget are selected by our editorial team, independent of our parent company. Some of our stories include affiliate links. If you buy something through one of these links, we may earn an affiliate commission.