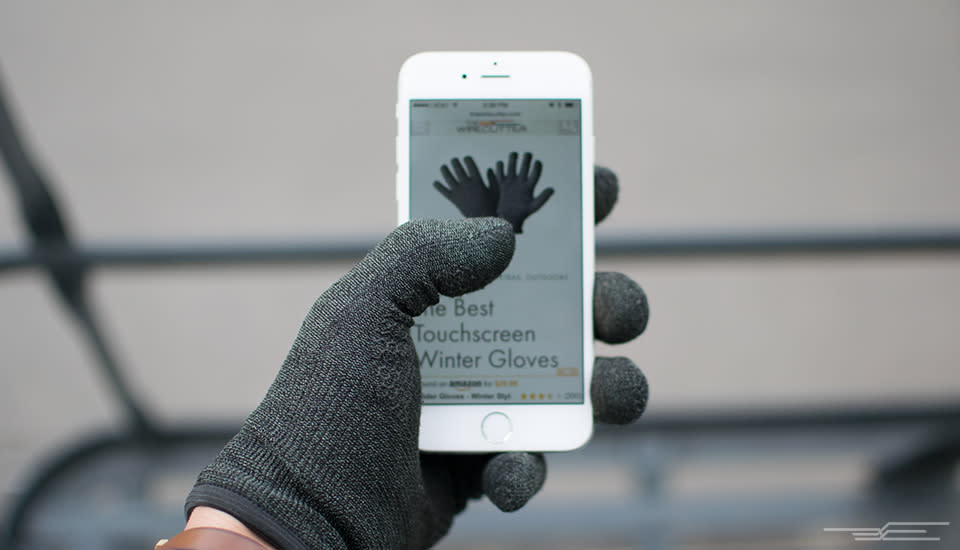 Over the past three winters, we've tested more than 20 pairs of touchscreen gloves while moving half a ton of stumps, climbing on ice, and just walking and biking around town. For the third year running and despite some stiff competition, the Winter Style Touchscreen Gloves by Glider Gloves are the ones we recommend for most people, offering up the best combination of warmth, dexterity, and grip for about $30 (also available direct). They're not the absolute warmest gloves you can buy, but they're warmer than anything that's better at handling touchscreens and better at handling touchscreens than anything that's warmer. We tested a lot of gloves and many of them were pretty good, but not as good as our pick.
Over the past three winters, we've spent many hours texting, gaming, and emailing using an Atrix 2, Nexus 7, iPhone 5S and 6, iPad 2, and iPad Air while wearing gloves of every variety, from cashmere-lined leather to mechanic's work gloves. We also wore them through several "polar vortex" events and while walking around town and through the woods. We even took our top pick ice climbing and moved a half-ton of stumps while wearing them. Few other publications do comparative reviews of touchscreen gloves, so much of what we tested was dictated by what our readers requested or what's popular on Amazon, but there are a few good reviews out there such as this guide from Inc. Magazine and this one from TechHive. (For more detail on how we narrowed down the field, check out our full guide.) Note that the tip on the Glove.ly (left) has a bit of a protruding seam in the center, whereas the Glider's tip (right) is flush with the glove and located off to the right side, where it won't affect the touchscreen performance.
The Glider Gloves Winter were the best all-around touchscreen gloves in our testing and quickly became the go-to during the cold days outside. Their fleece-lined knit construction gives them an exceptionally snug fit compared to other gloves that are either just knit (can be floppy) or just fleece (usually too loose). They also have an extra-sticky honeycomb-patterned grip pattern that helps you maintain a secure grip on your slick smartphoneyou can even use them one-handed.

Kannon Yamada writing at MakeUseOf was particularly impressed by the grippy finish on the palms and fingers compared to other gloves he'd used in the past: "Functionality is where Glider Gloves comes out far ahead. The hexagonal rubber grip on its palms and fingers allow for more active use. While bicycling, I often reach for a metal sports bottlethe Agloves [another popular glove] did not provide much of a grip Glider Gloves, on the other hand, make you feel like Spiderman."

Over at TechHive, Amber Bouman was impressed with the Gliders' dexterity. She gave them four out of five stars, writing: "I was pleased with how few characters I missed, and often I was able to compose messages without a single character mistakesomething I wouldn't have expected given the bulk of the gloves."

Wrist coverage could be better. On windy days, depending on your jacket, it could leave you a bit exposed. In this respect, it's more like a gardener's or mechanic's glove than a typical winter glove in terms of fit. Their knit design also isn't that durable. I wouldn't expect them to last more than one full winter because the conductive threads are fragile and wear out over time. However, handwashing with mild detergent will restore fading touchscreen performance in many cases. The ThermoBall's fingertips (left) fit tightly and remain smooth for predictable touchscreen manipulation, while the Denali's (right) are loose-fitting and get wrinkly when you move your fingers-especially the thumb. Both are size medium..
If our main pick sells out, or if you live in a colder climate and need a warmer glove and are using your touchscreen for only simple tasks, The North Face's ThermoBall (about $50 for men's and women's versions) is the warmest touchscreen glove that allows for decent dexterity. Unlike previous North Face gloves that used inaccurate sewn-on panels, the ThermoBalls feature responsive touchscreen control on all the fingers. They also fit a lot tighter than North Face's other offerings due to the added insulation. We also have picks for thinner gloves for warmer temperatures, leather, and more. To see the full list of picks and competition, please visit our full guide.

The Glider Gloves Winter offer simply the best mix of the most important features in a touchscreen glove without any major drawbacks. They're also likely to fit you while being unlikely to let your device slip out of your hand, and they don't draw a lot of attention to themselves or look cheap.

In this article: glider, glidergloves, glidergloveswinter, gloves, NorthFace, northfacethermoball, partner, sponsored, syndicated, TheNorthFace, thermoball, thewirecutter, touchscreengloves, uk-feature, wirecutter
All products recommended by Engadget are selected by our editorial team, independent of our parent company. Some of our stories include affiliate links. If you buy something through one of these links, we may earn an affiliate commission.