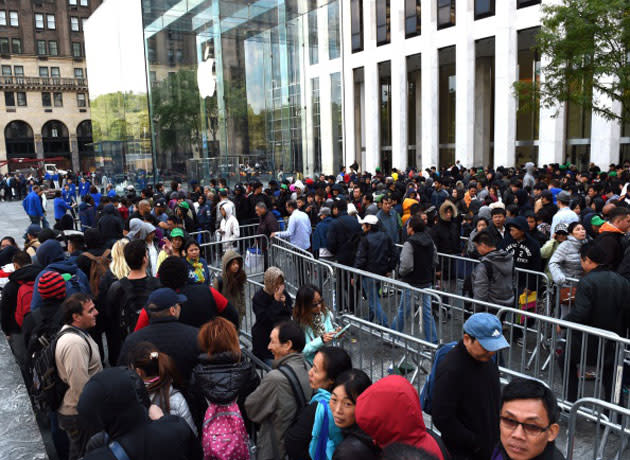 Apple no longer wants you to wait in long lines during product launches -- in fact, it would sometimes prefer that you stay at home. An Angela Ahrendts memo leaked to Business Insider shows that the company is going to steer you toward using either the Apple Store app or its online store to buy devices like the Apple Watch and 12-inch MacBook. There's "more availability" online, she says, and you'll know just when you'll get your goods instead of "crossing your fingers" while you sit in a queue.

Importantly, this isn't just idle talk. The memo source claims that, in the UK, you can't pick up your Apple Watch order in-store -- you'll have to wait for it to show up at home. While you'll still have the store pickup option in the US (and likely elsewhere), it's clear that Apple will be downplaying in-person sales for at least some of its hot ticket items.

The move isn't entirely surprising. It's not uncommon to see people lining up for iPhones weeks after launch, only to be turned away disappointed. Moreover, Apple retail lineups have their own share of problems. You'll sometimes spot people paid to buy devices for overseas black markets, and some of those at the front of the largest stores (particularly Fifth Avenue in New York) are representing companies desperate for publicity. An emphasis on internet purchases could not only help legitimate customers get what they want in a timely fashion, but discourage smugglers and attention-seekers.

In this article: AngelaAhrendts, apple, applestore, applewatch, macbook, mobilepostcross, retail, shopping, store
All products recommended by Engadget are selected by our editorial team, independent of our parent company. Some of our stories include affiliate links. If you buy something through one of these links, we may earn an affiliate commission.