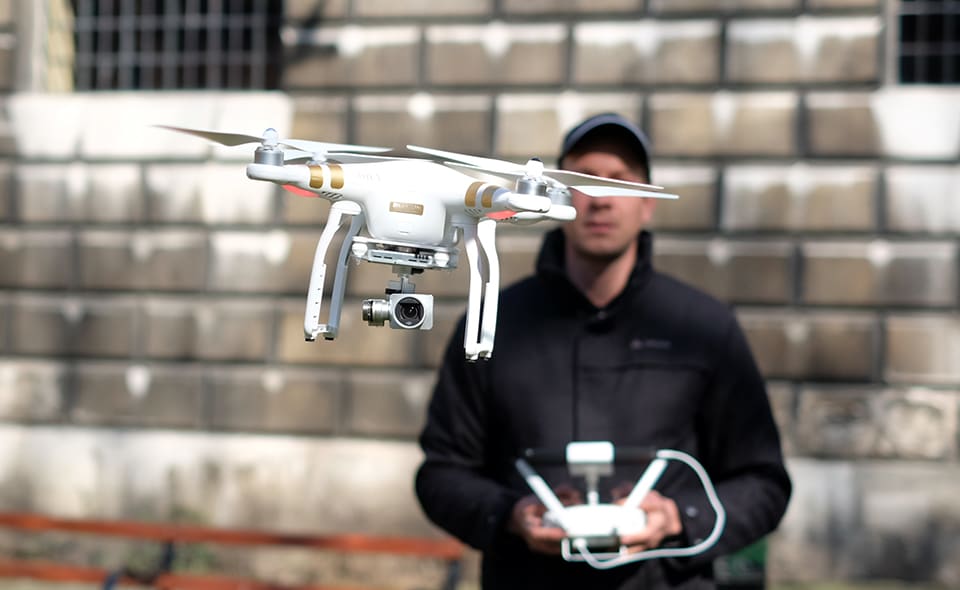 Historically, DJI sells a base model Phantom without a camera, and you could pay a bit more for a Phantom "Vision" to get one built-in. At launch, the Phantom 3 comes with a camera and gimbal (stabilizer) built-in by default. The "Vision" branding has been replaced by "Professional" and "Advanced" to identify which camera you'll be getting: 4K(30fps)/12-megapixel and 1080p(up to 60fps)/12-megapixel respectively.

We asked DJI about a camera-less Phantom 3, and Director of communications, Michael Perry, tolds us "The only thing we're announcing is the Phantom 3 Professional and the Phantom 3 Advanced. As you can probably tell by the name there's scope for more." We're reading between the lines, but a Phantom 3 without a camera (and thus suitable for a third party cameras/a GoPro) at a later date seems very likely.

The Phantom 3 isn't just about the camera, the drone's been updated to include indoor positioning sensors (so if you film inside, it's less likely to crash) similar to what we saw in the Inspire 1, and GPS has been improved with support for GLONASS also. Newbie pilots will benefit from auto take-off and landing (another feature inherited from the Inspire). But for the most part (at least the looks), it's the same Phantom that we know and love (with swanky gold stickers!). 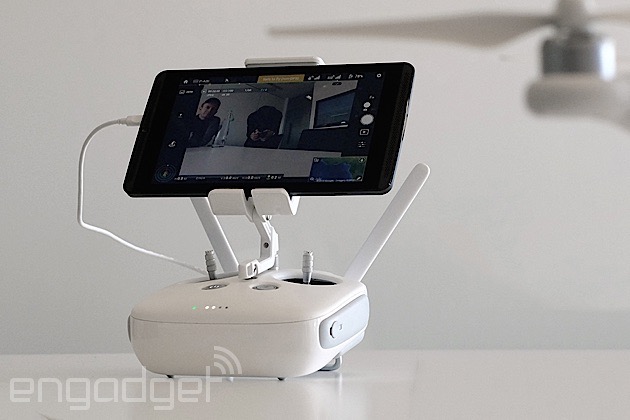 The Vision models introduced a feature that sent a low-quality live feed from the camera to your phone (known as first-person view, or FPV) that needed an ugly WiFi booster bolted onto the controller. This has been scrapped in place of DJI's own "lightbridge" technology baked right in the the Phantom 3 and its controller. What that means for you, is that there's no longer a WiFi dongle (that needs charging!) hanging off your controller -- and no more fiddly setting up of WiFi networks. Connect your phone/tablet (Android or iOS) to the controller by USB, and voila -- 720p HD live feed from the skies direct to your mobile device/DJI app from over a mile away. Flight times are estimated at about 23 minutes per battery.

This feed is where the fun starts. With your phone's data connection sat there, DJI decided it'd be a waste not to use it -- so (bandwidth provided) you can live stream from the Phantom 3 directly to YouTube (no need to jeopardize an iPhone running Periscope). When shooting something particularly cool, you can also mark the moment as a highlight, and when you're done, the app automatically edits a director's cut for you to share or enjoy later.

The camera on the Phantom 2 Vision+ wasn't our favourite. It did a decent job, but a wide field of view, and modest specifications meant lots of distortion, and an overcast sky was all it took for it to give less than great results. The cameras in the Phantom 3's appear to be an all round upgrade. For example, the f/2.8 shooter now has a 94-degree fixed field-of-view compared to the Vision+, which was 140 and suffered fisheye pretty bad. The narrower view also means you should rarely see the landing gear in shot -- which is pretty much the quickest way to ruin a killer video. If you want a little more control, there are settings for ISO, exposure, shutter speed and color filters, plus the camera can be tilted through 120-degrees of pitch to further up your cinematic/Spielberg game.

If you were hoping for waypoint flying and other such tricks, sadly, no dice. The Phantom 3 still has the necessary hardware, but that's left for keeping its position, and returning to home if it loses connection/the battery runs out. DJI likely hopes this sort of feature is more for customers of the Inspire 1. But, as drone tech progresses, many are starting to expect this sort of thing as standard. This doesn't mean that's it for software features though, DJI is opening up access to the camera downlink, which means you can expect to third-part apps to start popping up to add extra functionality, albeit indirectly.

So, which one do you want? After all, DJI has quite a few drones to choose from now. The Inspire 1 is still the coolest product the company makes, but it's also a "cool" $3,400. A Phantom 2 and gimbal for a GoPro currently costs $850 (plus upwards of $400 for the GoPro -- you'll pay even more for FPV). At $1,260 the Phantom 3 is the same price as the Phantom 2 with camera and gimbal, but with the added indoor sensors, software perks and FPV features on top. If you can live without 4K, then the "Advanced" at $1,000, will be even more tempting. Until we know how well those cameras perform though (we'll be sure to let you know, soon), you'll have to make do with the official promo videos.

The Phantom 3 Professional and Advanced launch in the coming weeks.

In this article: 4k, advanced, dji, djiphantom3, drone, phantom3, professional, quadcopter, videodrone
All products recommended by Engadget are selected by our editorial team, independent of our parent company. Some of our stories include affiliate links. If you buy something through one of these links, we may earn an affiliate commission.